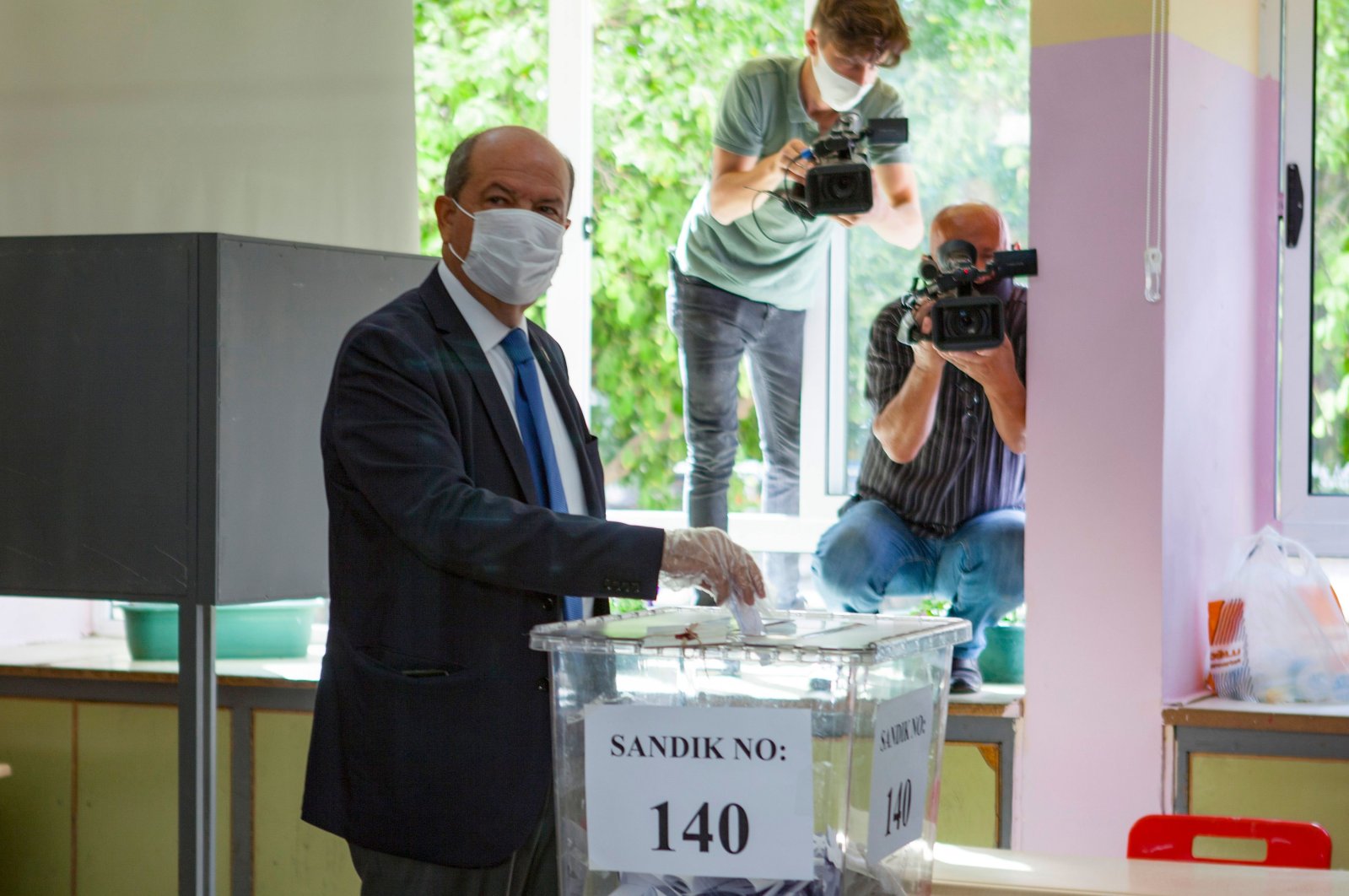 Turkish Cypriot Prime Minister Ersin Tatar casts his vote at a polling station in the northern part of Nicosia (Lefkoşa) during the presidential election, Oct. 11, 2020. (AFP Photo)
by Daily Sabah with AA
Oct 15, 2020 12:02 am

Political parties in the Turkish Republic of Northern Cyprus (TRNC) announced which presidential candidates to support on Wednesday for the second round of presidential polls which will take place on Oct. 18.

According to the Turkish News Agency (TAK-Cyprus), the Democrat Party (DP) revealed that it will support Prime Minister Ersin Tatar, the National Unity Party (UBP) candidate who received 32.35% of the votes during the first round.

Releasing a written statement, the party expressed that they have come to the decision by taking the recent regional developments into consideration. The statement further stated that the party is desiring "a president who preserves the unity and solidarity of the TRNC while having good relations with motherland Turkey."

During the first round of the elections, DP had supported Serdar Denktaş, an independent candidate and the son of the founding president of TRNC, Rauf Denktaş.

After DP's announcement, Denktaş expressed that he has cut off his relations with the party, of which he was the founder and president for 21 years. In his resignation announcement, Denktaş stated that although he respects the party's decision, as someone who criticized both leading candidates for their policies, he does not find it suitable to lead public opinion to vote for either one of them.

Denktaş received 4.20% of the votes in the first round of the elections.

Rebirth Party (YDP) also expressed support for Tatar while the People's Party (HP) announced that it decided not to lead the public opinion toward any specific candidate.

In the first round, the YDP's candidate Erhan Arıklı received 5.36% of the votes. HP, on the other hand, supported Kudret Özersay, who is also the chairman of the party and yet still raced independently. However, Özersay received only 5.74% of the votes.

Turkish Cypriots will cast their ballots for a second time this week after the candidates in the country's presidential elections failed to secure more than 50% of the votes in the first round.

Tatar will face the incumbent President Mustafa Akıncı, an independent candidate, who was the runner-up with 29.84%.

The Republican Turkish Party (CTP) announced on Thursday that it will support Akıncı in the upcoming elections. The initial candidate of the party, Tufan Erhürman, who trailed in third with 21.68%, was eliminated from the race.

Akıncı, the fourth president of the TRNC and in office since 2015, supports a federalist solution on the island of Cyprus in line with the United Nations' initiatives. Such a resolution could be efficient in solving other regional problems too, particularly tensions in the Eastern Mediterranean.

Tatar, on the other hand, seeks a two-state outcome and expresses a standing that is closer to Turkey, compared with Akıncı and Erhürman. Although he does not directly oppose a federalist solution, Tatar believes that tying hopes to such a plan is not realistic, considering the TRNC's complex past with the Greek Cypriot administration.

Some 11 candidates, including seven independents, ran in the TRNC presidential elections that were delayed by the COVID-19 pandemic. Some 198,867 registered voters cast ballots at 738 locations.

The first major test for the winner will likely be a meeting hosted by U.N. Secretary-General Antonio Guterres that will bring together the two sides with Cyprus' three guarantors – Greece, Turkey and the U.K. – to scope out the chances of resuming frozen peace talks. Guterres recently expressed that before any possible relaunch of diplomatic talks, the outcome of the TRNC elections ought to be announced, since the winning candidate may suddenly change the course of the island's future. He also signaled that as soon as elections took place, he planned to start a political collection of talks.

Over the decades, there have been several attempts to resolve the Cyprus dispute, all amounting to nothing.

The latest attempt, held with the participation of each of the island's guarantor countries, came to an end with no signs of progress in Switzerland in 2017.