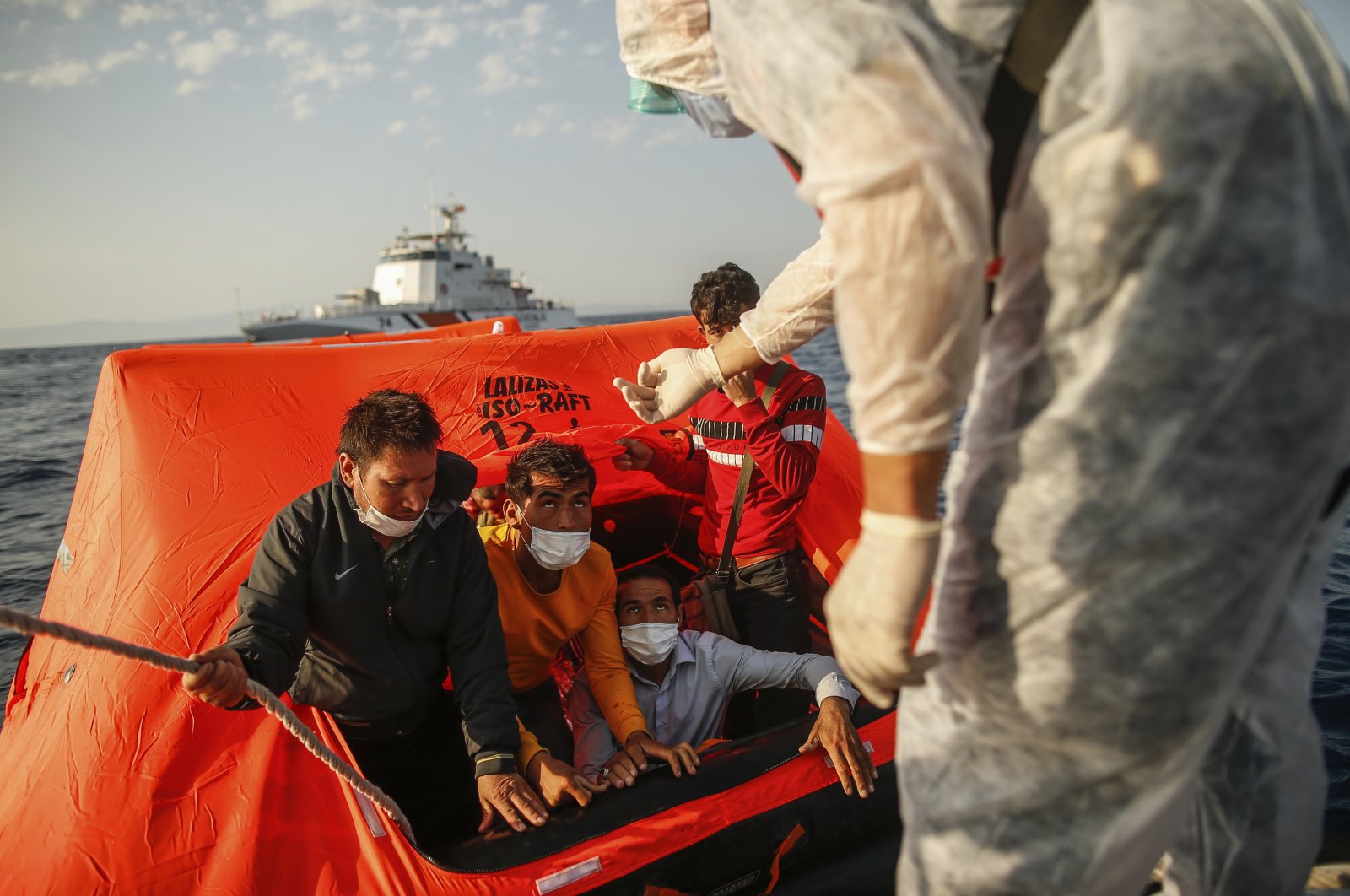 Turkish coast guard officers on their vessel, wearing protective gear to help prevent the spread of coronavirus, talk to migrants on a life raft after they were pushed back by the Greek coast guard in the Aegean Sea, between Turkey and Greece, Sept. 12, 2020. (AP File Photo)
by Daily Sabah with AFP Jun 23, 2021 9:53 am
RECOMMENDED

Amnesty International criticized Greek authorities for the torture, ill-treatment and illegal pushback of migrants and refugees to Turkey, saying that the country's practice had become its "de facto" border policy.

In a new report, the rights group described 21 incidents that involved around 1,000 people.

Many had been subjected to violence before being transferred back to Turkey, Adriana Tidona, migration researcher for Europe at Amnesty, said in the report.

"It is clear that multiple arms of the Greek authorities are closely coordinating to brutally apprehend and detain people who are seeking safety in Greece," she added.

The pushbacks, on land and at sea, sometimes involved people apprehended as far as 700 kilometers (435 miles) inside Greek territory, said Amnesty.

"The level of organization needed to execute these returns, which affected up to 1,000 people in the incidents we documented ... shows just how far Greece is going to illegally return people and cover it up," she added.

Earlier this month, in an interview with France24 television, Prime Minister Kyriakos Mitsotakis once again denied asylum-seekers were being forced back.

Greece will use "all tools in (its) arsenal with full respect to international law and human rights" to achieve this, he said.

Amnesty said it documented incidents from between June and December 2020, several months after a crisis began when Turkey opened its borders.

Most of the people they spoke to said they had experienced or witnessed violence from both uniformed Greek officials and men in civilian clothing. They described beatings with sticks or truncheons, kicks, punches, slaps and pushes, sometimes resulting in severe injuries. Men were often subjected to humiliating and aggressive strip searches, sometimes in sight of women and children, the report said.

Some incidents also amounted to torture, due to their severity and humiliating or punitive intent, said the rights group.

Among those deported to Turkey were a recognized refugee and a registered asylum-seeker who had been living in mainland Greece for almost a year, Amnesty added.

One of them, a 31-year-old Syrian man, said police had shredded his asylum card before sending him to the border.

Amnesty called on European Union border force Frontex to suspend or withdraw its Greek operations, arguing that the incidents had happened in areas where it has significant numbers of staff.

"The agency cannot, therefore, claim to be ignorant of the abuses that we, and many others, have documented," Tidona said.

Greek authorities arrested Dutch journalist and program maker Ingeborg Beugel for offering shelter to an Afghan refugee at her home.

The journalist, who has been living on the island of Hydra for four decades, was detained on June 20 for hosting a 23-year-old Afghan refugee, on the grounds that she “facilitated an illegal residency of a citizen of a third country.”

The refugee who was detained with Beugel was released after authorities found out that they had filed for asylum.

The 61-year-old journalist told Greek daily Efimerida ton Sintakton that she was hosting the refugee and considered them like a grandchild and the situation was not illegal.

“For me, Greece is synonymous with hospitality so if they punish hospitality, they will put an end to the Greek civilization we know,” she told the daily.