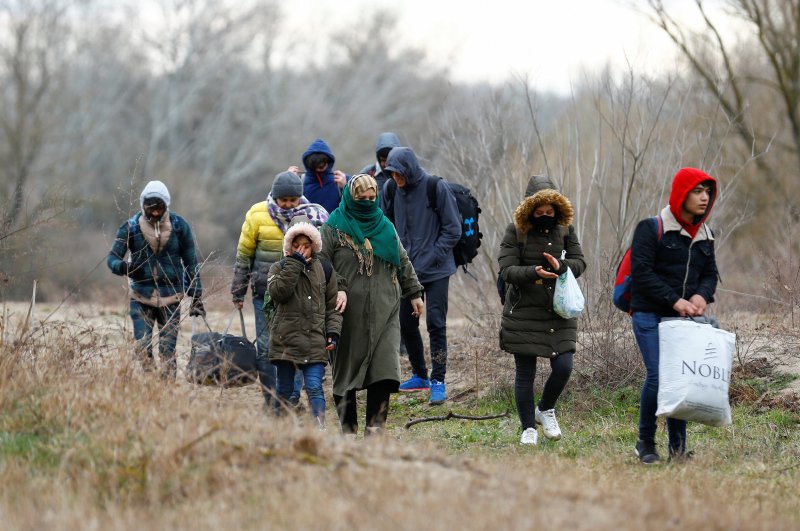 Migrants arrive to cross the Evros river to reach Greece as they are pictured from the Turkish border city of Edirne, Turkey, February 29, 2020. (REUTERS Photo)
by Daily Sabah with AFP Feb 29, 2020 12:33 pm
RECOMMENDED

Erdoğan vowed to allow refugees to travel on to Europe from Turkey which he said can no longer handle new waves of people fleeing war-torn Syria.

The president said nearly 4 million people moving toward Turkey's border to flee regime violence and 1.5 million Syrians are already located at the border.

He said the European Union did not keep its promise of allocating 25 million euros to share the financial burden of refugees on Turkey. The president said he had proposed German Chancellor Angela Merkel that Turkey would send 100 million euros if Europe accepts refugees in.

"We cannot handle a new influx of refugees but we cannot leave those people at the mercy of the Assad regime either."

"What did we do yesterday (Friday)? We opened the doors," Erdoğan said in Istanbul in his first comments after the escalation of clashes between the Turkish forces and the regime in northern Syria on Thursday. "We will not close those doors...Why? Because the European Union should keep its promises."

The Turkish leader also said 18,000 migrants have amassed on the Turkish borders with Europe since Friday, adding that the number could reach as many as 30,000 on Saturday.

Shortly after the killing of 36 Turkish soldiers in an airstrike in Idlib in northern Syria, a senior Turkish official said early Friday that Ankara would no longer close its border gates to refugees who sought to go to Europe. Turkish police, coast guard and border security officials have been ordered to stand down following the attack, in anticipation of the imminent arrival of refugees from Syria's Idlib where nearly a million have been displaced.

Meanwhile, Greek police fired teargas at migrants who gathered on its border with Turkey and were demanding entry. The Greek government reiterated its determination to keep migrants out.

"The government will do whatever it takes to protect its borders," government spokesman Stelios Petsas told reporters, adding that in the past 24 hours Greek authorities had averted attempts by 4,000 people to cross.