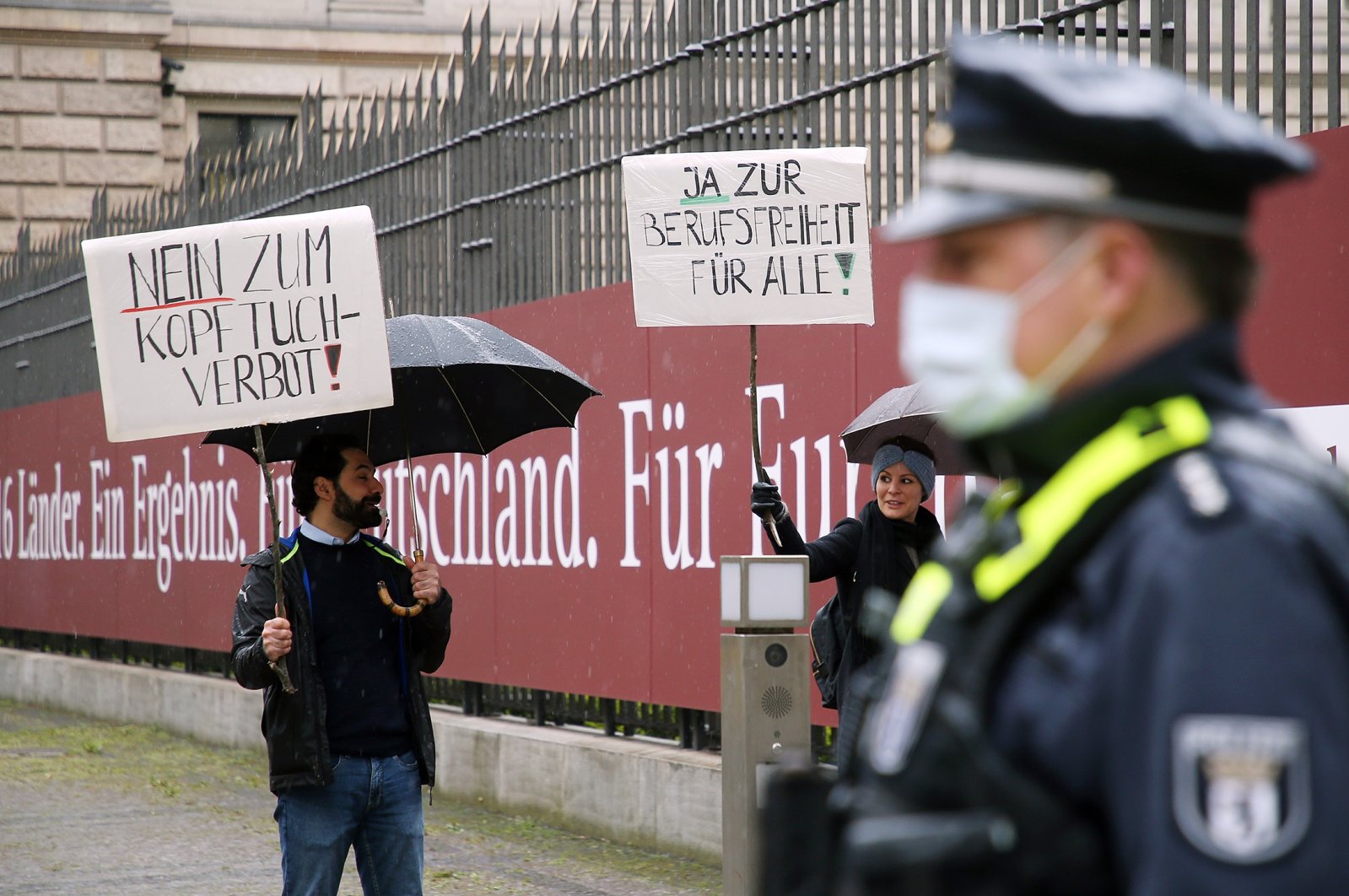 Two demonstrators hold up a sign in front of the Federal Council against a headscarf ban, Berlin, Germany, May 7, 2021, Berlin (Getty Images)
by DAILY SABAH Jul 18, 2021 12:53 pm
RECOMMENDED

A top EU court ruling allowing companies in member states to ban employees from wearing headscarves is "legally and morally wrong,” Turkey's Foreign Ministry stated on Sunday, stressing that the decision will fan the flames of Islamophobia and is dangerous.

The Foreign Ministry said in a written statement that the decision by the European Court of Justice "violates the freedom of religion."

"We condemn the decision, which is legally and conscientiously wrong and dangerous regarding Islamophobia it will fuel," it added.

The statement described the court's ruling as "a new example of efforts to give Islamophobia and intolerance toward Muslims an institutional and legal identity in Europe."

Underlining that Muslims are exposed to intolerance, hate speech and even violence, the statement stressed that "especially Muslim women are adversely affected by this situation."

"This undeniably dangerous trend which indicates that lessons have not been learned from the bitter experiences of the past is also highlighted in the reports of the European Commission against Racism and Intolerance (ECRI) and the UN Rapporteur on Freedom of Religion and Belief," it said.

"And yet, at a time when hatred against Islam, racism and the poison of hate that take Europe hostage, are on the rise, the Court of Justice of the European Union's decision not only ignores freedom of religion, but also provides a basis and legal cover for discrimination," it added.

The European Court of Justice on Thursday ruled on two cases filed by Muslim women in Germany who were suspended from their jobs for wearing headscarves.

It ruled that companies in member states can ban employees from wearing headscarves if they "need to present a neutral image to customers."

Turkey's communications director, Fahrettin Altun, on Saturday similarly blasted the EU ruling. "It is unbelievable that fascism just spread to the courts. This wrong decision is an attempt to lend legitimacy to racism," said Altun on Twitter.

Altun also accused Europe of "seeking to embrace its dark past" instead of "denouncing it."

"We condemn this ruling, which infringes on human dignity," he stressed.

Presidential Spokesperson Ibrahim Kalın on Sunday criticized the ruling saying: "The decision by the European Court of Justice on headscarves in the workplace is another blow to the rights of Muslim women with headscarves and will play right into the hands of those warmongers against Islam in Europe."

"Does the concept of religious freedom now exclude Muslims?" he added.

This comes as Germany has experienced a rise in racist and anti-Muslim sentiment in recent years, fueled by the propaganda of neo-Nazi groups and the far-right opposition Alternative for Germany (AfD) party. Germany is home to 81 million people and hosts the second-largest Muslim population in Western Europe after France. Of the country’s nearly 4.7 million Muslims, at least 3 million are of Turkish descent.

For instance, Altun said Europe’s racists hide behind words like freedom and democracy to incite violence against Muslims.

Under the pretext of freedom of speech, the tolerant political climate has helped far-right sympathizers with violent tendencies expand their support.

Germany has been recording Islamophobic crimes separately since 2017. In 2018, there were 910 incidents, including 48 attacks on mosques alone, a little lower than in 2017 with 1,095 crimes. Every other day throughout the course of 2019, a mosque, an Islamic institution, or a religious representative in Germany was targeted in anti-Muslim attacks. More than 90% of these were attributed to politically motivated crimes by the far-right.