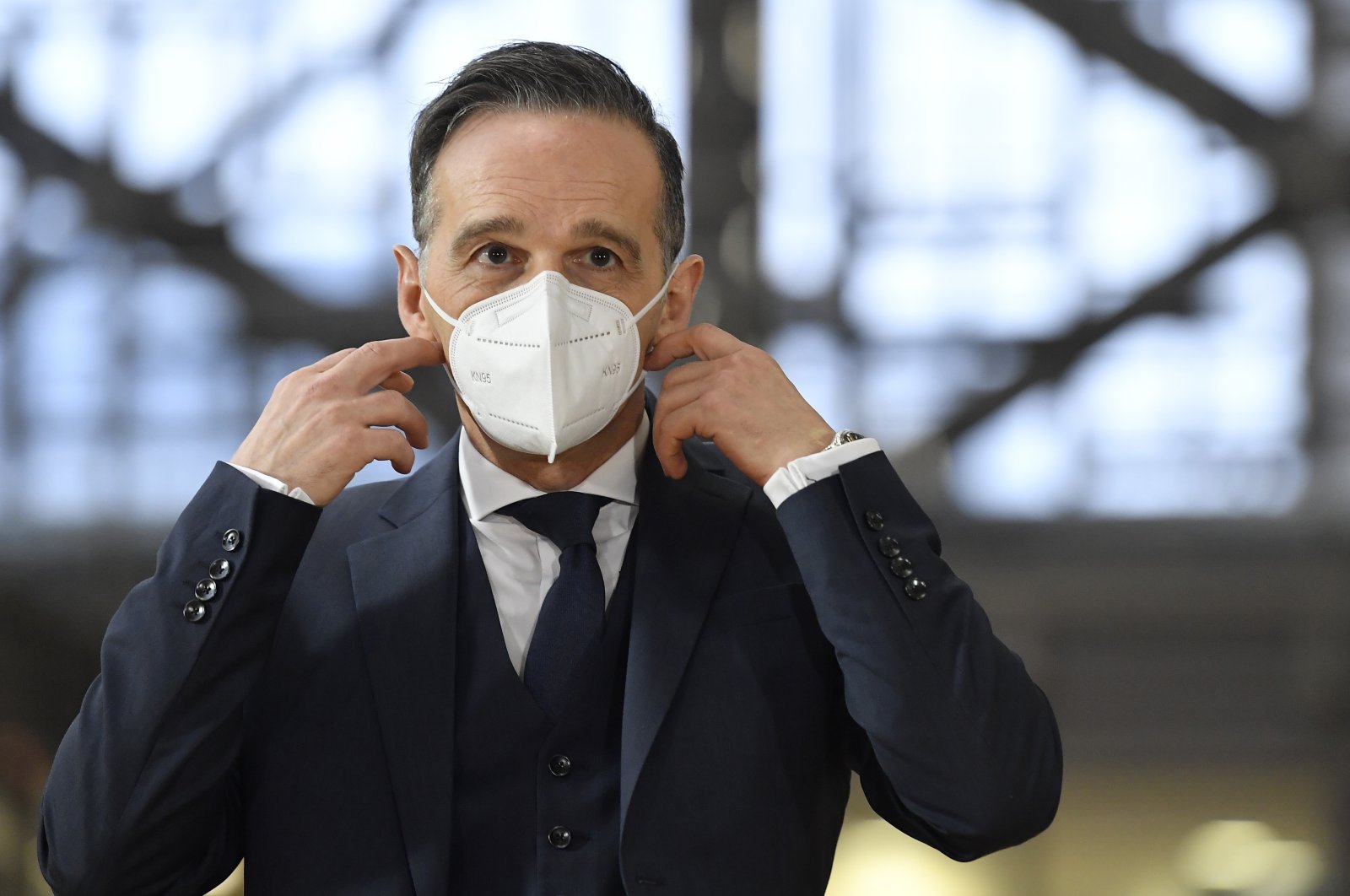 German Foreign Minister Heiko Maas takes off his protective mask as he arrives for a meeting of EU Foreign Ministers at the European Council building in Brussels, Belgium, Dec. 7, 2020. (AP Photo)
by DAILY SABAH WITH AGENCIES Dec 07, 2020 1:15 pm
RECOMMENDED

European Union foreign ministers will evaluate the grounds for sanctions against Turkey over the Eastern Mediterranean gas dispute on Monday before the bloc's leaders decide whether to make good on their threat to impose punitive measures.

Ministers will not take decisions at their meeting on Monday, leaving that to Thursday's summit of EU leaders, who in October told Turkey to stop exploring in disputed waters in the Eastern Mediterranean.

"I'm not aware of any EU government challenging the view that the situation is worse than October and that leaders should consider the consequences," said a senior EU official. "We have been requesting a change that has not come."

The EU says Turkish drill and survey ships have continued to work in waters contested by Greece and the Greek Cypriot administration, which Greece says makes formal talks with Turkey over maritime claims impossible.

Germany, the current holder of the EU's six-month presidency, holds the key to whether sanctions go ahead. It had hoped to mediate between Athens and Ankara but was angered when Turkey resumed exploration for gas off Cyprus in October after a pause.

European foreign ministers will discuss measures against Turkey at their meeting on Monday as there has been no de-escalation in the conflict in the Eastern Mediterranean in the past months, Germany's foreign minister said Monday.

"Germany has worked hard to facilitate a dialogue between the European Union and Turkey over the past months," Heiko Maas said before meeting his EU counterparts.

"But there have been too many provocations, and tensions between Turkey, (Southern) Cyprus and Greece have prevented any direct talks," he added.

"For this reason, we will talk about what consequences we should draw – also with a view to the EU summit this week," he said.

After the meeting, Maas said they believe that the EU, in principle, has to continue dialogue with Turkey.

France and the European Parliament say it is time to punish Turkey, a NATO ally and candidate to join the EU that is seen in Brussels as fueling the gas dispute for domestic politics.

The European Parliament called for sanctions on Nov. 26, but the return of the Oruç Reis to port and President Recep Tayyip Erdoğan's call for dialogue may give the EU reasons to hold off for now.

The mechanism was designed to reduce the risk of incidents and accidents in the Eastern Mediterranean and includes the creation of a hotline between Athens and Ankara to facilitate resolving conflicts at sea or air.

Meanwhile, a key EU lawmaker said Monday even small progress in Turkey-EU relations offers a window of opportunity for dialogue and negotiation on broader issues.

"The very recent downturn in Turkey-EU relations after the geopolitical developments in the Eastern Mediterranean could be gradually reversed through some moves from each side," Ryszard Czarnecki, the head of the EU-Turkey Friendship Group in the European Parliament, told Anadolu Agency (AA) in an exclusive interview.

"First, the EU should acknowledge the fact that one of Turkey's main targets in the region is to be a recognized player in the East Med energy competition and not to feel 'surrounded' by the members of the East-Med Gas Forum (Greece, the Greek Cypriot administration, Italy, Israel, Egypt, Jordan, and Palestine)," he explained.

"Turkey already offered to convene an international conference to discuss the geopolitical developments in the region. Moreover, Turkey signaled that it is ready for a constructive engagement," he said.

Czarnecki urged each side to take steps toward developing a positive agenda consisting of a "modernized customs union" as well as further cooperation on migration, visa liberalization and enhanced people-to-people contacts.