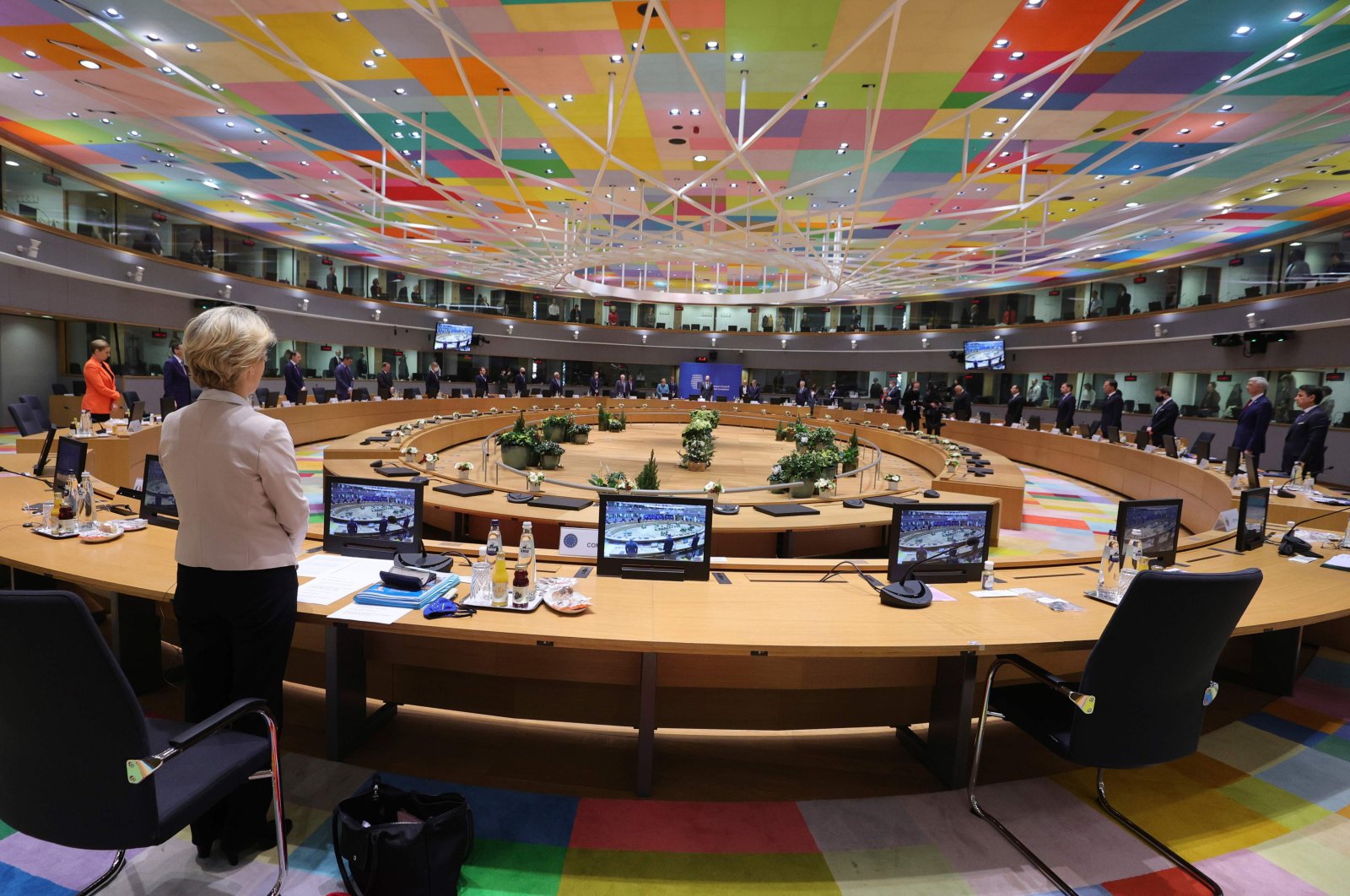 European Commission President Ursula von der Leyen (1st-L) and EU leaders observe a minute of silence in tribute to late French President Valery Giscard d'Estaing prior to a round table meeting during an EU summit at the European Council building in Brussels, Dec. 10, 2020. (AFP Photo)
by agencies Dec 11, 2020 8:57 am
RECOMMENDED

The European Union announced early Friday it has decided to impose additional sanctions on Turkish individuals and companies in light of Turkey's activities in the Eastern Mediterranean.

As the EU leaders summit in Brussels continued, the union shared the relevant part of the final declaration on Turkey as they reached a consensus after long hours of negotiations.

The declaration claims that Turkey engaged in unilateral actions and provocations and escalated its rhetoric against the EU.

A diplomat told Agence France-Presse (AFP) the sanctions would target individuals and that further measures could be imposed "if Turkey pursues its actions."

There will be disappointment in Athens that the leaders did not agree to seek an arms embargo or to target entire sectors of Turkey's economy.

The EU noted Turkey's withdrawal of the Oruç Reis research vessel and insisted on sustained de-escalation to follow for the early resumption and smooth continuation of direct exploratory talks between Greece and Turkey.

"The European Council reaffirms the EU's strategic interest in the development of a cooperative and mutually beneficial relationship with Turkey. The offer of a positive EU-Turkey agenda remains on the table, provided Turkey shows readiness to promote a genuine partnership with the union and its member states and to resolve differences through dialogue and in accordance with international law," it added.

Highlighting the importance of keeping channels of communication between the EU and Turkey open, it said the EU will continue to provide financial assistance to Syrians in Turkey.

Turkey currently hosts 4 million Syrian refugees, more than any other country in the world.

The EU invited the council to adopt additional listings based on its decision on Nov. 11, 2019, concerning restrictive measures in view of Turkey's "unauthorized drilling activities" in the Eastern Mediterranean.

It also invited EU High Representative Josep Borrell and the commission to submit a report on the state of play concerning EU-Turkey political, economic and trade relations and on instruments and options on how to proceed.

The declaration condemned the opening of part of the abandoned city of Varosha (Maraş) and argued that U.N. Security Council (UNSC) resolutions should be respected.

It also asked Borrell to take forward the proposal of a multilateral conference on the Eastern Mediterranean.

"The EU will seek to coordinate on matters relating to Turkey and the situation in the Eastern Mediterranean with the United States," it added.

EU leaders gathered in Brussels on Thursday for two days of discussions on the EU budget and COVID-19 as well as trans-Atlantic ties and relations with Turkey.

Turkey, which has the longest continental coastline in the Eastern Mediterranean, has rejected maritime boundary claims made by Greece and the Greek Cypriot administration. It stressed that these excessive claims violate the sovereign rights of both Turkey and Turkish Cypriots.

On the eve of the EU summit, President Recep Tayyip Erdoğan dismissed the sanctions threat.

"Turkey does not care much about any sanctions decision to be made by the EU," he said.

Some members of the European Union and of NATO – the military alliance that includes both Greece and Turkey – have been more cautious.

Germany has led diplomatic outreach aimed at resolving the dispute and NATO has set up a military hotline to prevent accidental clashes.

He noted that Turkey was hosting around 4 million refugees, more than any other NATO ally and that the country had suffered from terrorist attacks. "At the same time, we need to make sure that we realize the importance of Turkey as part of NATO and also as part of the Western family."