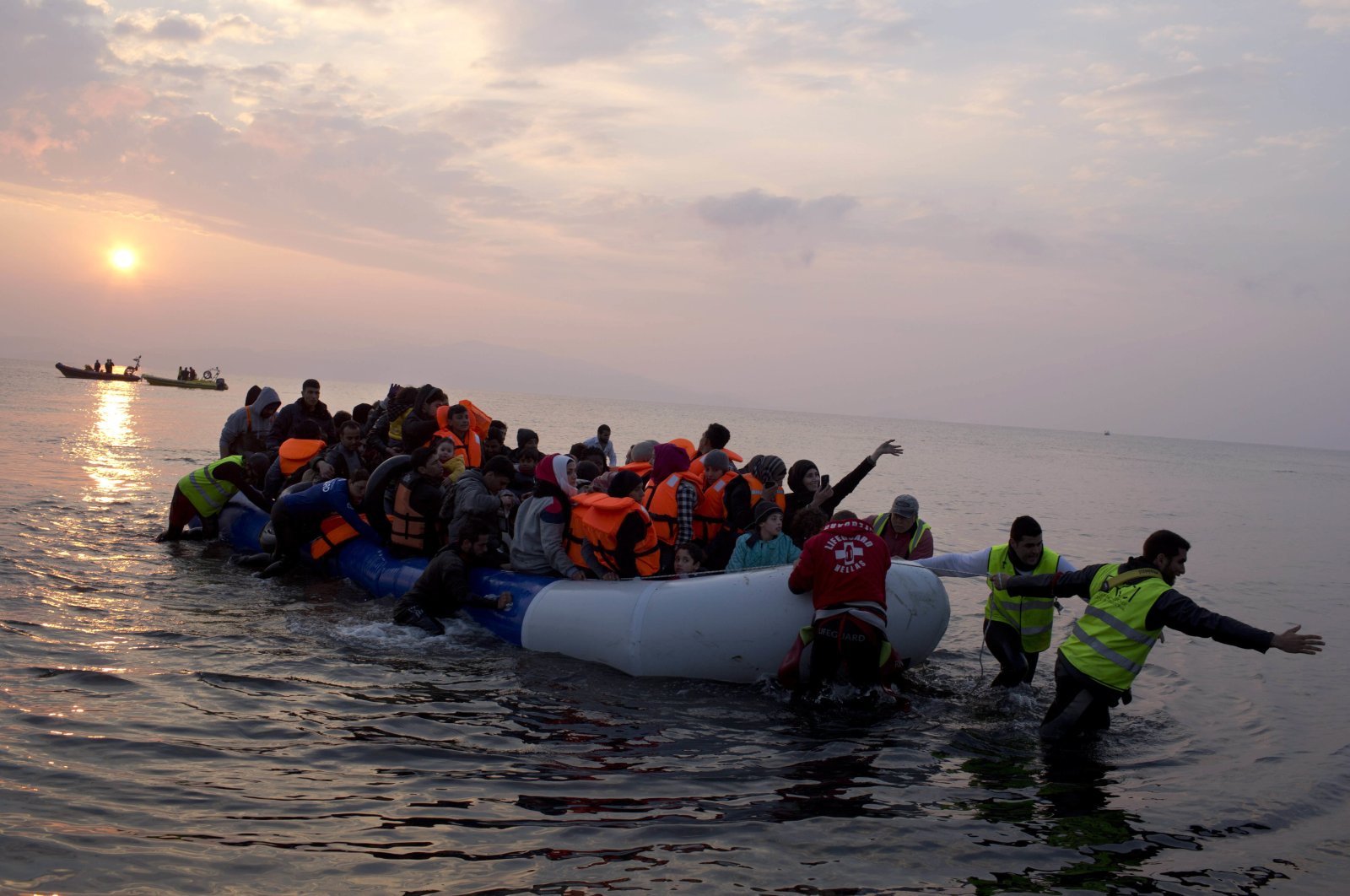 Volunteers help migrants and refugees on a dingy as they arrive at the shore of the northeastern Greek island of Lesbos, after crossing the Aegean sea from Turkey, March 20, 2016. (AP Photo)
by Daily Sabah with AA Mar 24, 2020 10:54 am
RECOMMENDED

A new European Union report on the 2016 deal with Turkey on migrants is due out this Thursday, EU foreign policy chief Josep Borrell told an online news conference after a videoconference with European foreign ministers on Monday.

The diplomatic service document will analyze the prospects of future EU-Turkey ties based on the March 2016 agreement, including the topics of visa liberalization and the customs union, issues Turkey says the EU failed to keep its promises on.

European heads of states and governments will possibly discuss the findings at their videoconference on Thursday.

Borrell was tasked with holding talks with Foreign Minister Mevlüt Çavoşuğlu to find ways to better implement the 2016 deal.

In exchange for these promises, Turkey took responsibility for discouraging migration through the Aegean Sea by taking stricter measures against human traffickers and improving the conditions of Syrian refugees living in Turkey. Despite significant developments controlling migration traffic, the EU has not delivered on its commitments stated in the deal.

Although the first stage of funding was provided to Turkey, the EU has yet to fulfill the second stage or other provisions such as establishing the visa-free deal for Turkish citizens and updating the customs union. Turkey currently hosts some 3.6 million Syrian refugees, more than any other country in the world, and spent $40 billion through the process, according to official figures.

The latest humanitarian crisis in northwestern Syria's Idlib, caused by Bashar Assad's attacks on civilian-populated areas, has forced nearly 1 million people to move near the Turkish border for refuge. The renewed attacks risked another wave of migration to Turkey, which already hosts 3.7 million Syrian refugees and says it cannot take in any more. In addition, 34 Turkish soldiers were killed by forces of Assad's regime. The Turkish soldiers were working to protect local civilians under a 2018 deal with Russia, under which acts of aggression are prohibited in the region.

In response to the lack of humanitarian and financial aid from the international community and the attack on Turkish soldiers, President Erdoğan began allowing refugees to migrate toward Europe through land borders several weeks ago. Since then, thousands of migrants and refugees have flocked to the Turkish province of Edirne along the border with Greece and Bulgaria to make their way into Europe.

In his latest speech, Borrell said the situation at the Turkish-Greek border had improved.

“We have to continue the agreement” of 2016, he said, arguing that it is in the “mutual interest” of both parties.