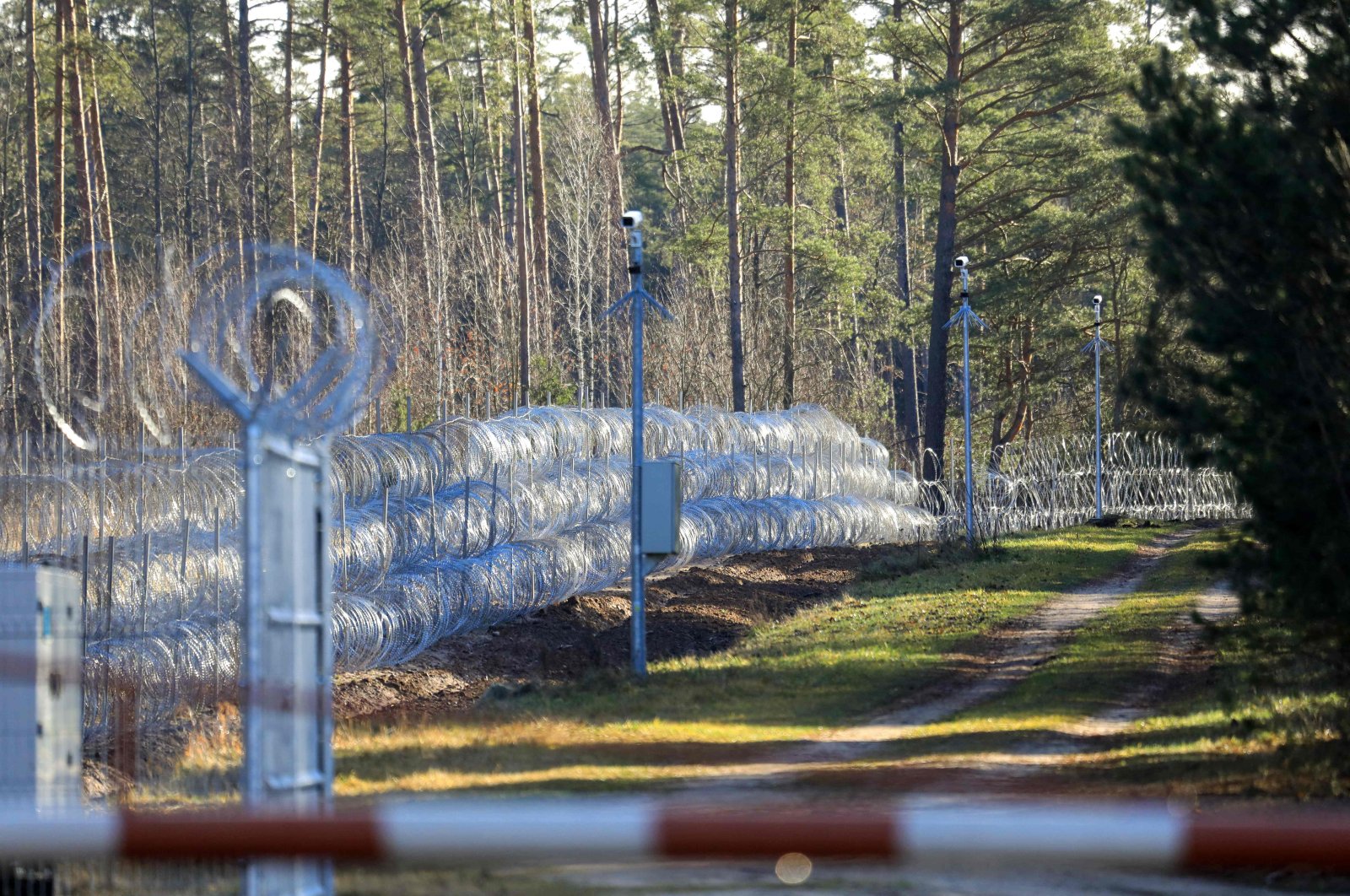 Barbed wire fence is pictured at the Lithuanian- Belarusian border in Sadziunai, Lithuania, on November 22, 2021. (Photo by PETRAS MALUKAS / AFP)
by DAILY SABAH WITH AA Dec 03, 2021 10:53 am
RECOMMENDED

Nations around the world, especially European countries, should come together and determine a road map to address the issue of migration, Turkey's Parliament Speaker Mustafa Şentop said Friday, underlining that the responsibility should not fall on the shoulders of certain countries.

Speaking to Anadolu Agency (AA) after completing his official visit to Poland, Şentop said that there are two dimensions to the ongoing migrant crisis on the Poland-Belarus border.

Underlining that the issue of migration is an important global problem, he said: "Turkey has already been hosting around 5 million migrants for 10 years. Turkey is the country that has the biggest problem with irregular migration in the world. But we think that this is a global problem that concerns not only certain countries, not only neighboring countries on the migration route, but also the whole world."

Saying that everyone should assume their responsibilities regarding this issue, Şentop added: "We have expressed all these at international meetings. It would be beneficial to come together to produce some solutions regarding this. For years, the problem in Turkey will come to the agenda of other countries in some way today or tomorrow."

For weeks, thousands of people seeking a new life in the European Union have been stranded at the bloc's external border with Belarus. The EU accuses Minsk of pushing or transporting migrants from countries like Iraq to its frontiers in revenge for Western sanctions. Minsk refutes this.

Poland, where most migrants have arrived, has already halted asylum claims at legal entry points and has been accused of pushing people back into Belarus against international law.

He also pointed to the humanitarian dimension of the issue saying: "It is necessary to adopt an approach that will preserve the minimum human rights of people who have been forced to migrate because they are unable to live in their own lands in one way or another. In winter conditions, women and children should be treated humanely.

"It is also wrong for countries to keep the problems among themselves on the agenda by using migrants as a tool, and to try to solve them somehow. That's why we supported Poland. As soon as we learned that some airports from Turkey regarding the transfer of these migrants were used within this plan, necessary precautions were taken. As Turkey, we refused to be an instrument of such a plan. We have taken every necessary precaution step by step."

Ankara last month banned citizens of three Middle Eastern countries from flying from Turkish airports to the former Soviet republic because of "the problem of illegal border crossings between the European Union and Belarus."

The decision came days after European Commission chief Ursula von der Leyen raised the possibility of imposing sanctions on airlines that engage in "human trafficking." Turkish Airlines (THY) provides one of the most heavily used international links to the Belarusian capital Minsk. Turkey's announcement was met with relief by European officials at a time of lingering strains in Ankara's relations with Brussels.

Turkey is home to up to 5 million refugees and migrants – most of them from war-scarred Syria – and remains one of the preferred routes for migrants and refugees to enter Europe. The number of migrants passing through Turkey has ticked back up after falling off sharply in the first year of the coronavirus pandemic.

Calling international actors, specifically European countries, to band together and determine a road map on the issue of migration and not to let the responsibility fall on the shoulders of certain countries, Şentop said: "The whole world is responsible for this, and some countries are even more responsible; because it is the policies of some big countries that make those countries uninhabitable. Therefore, they have to take responsibility for the problem they cause. Otherwise, we may encounter more serious problems that will put the whole world in trouble in the coming years."