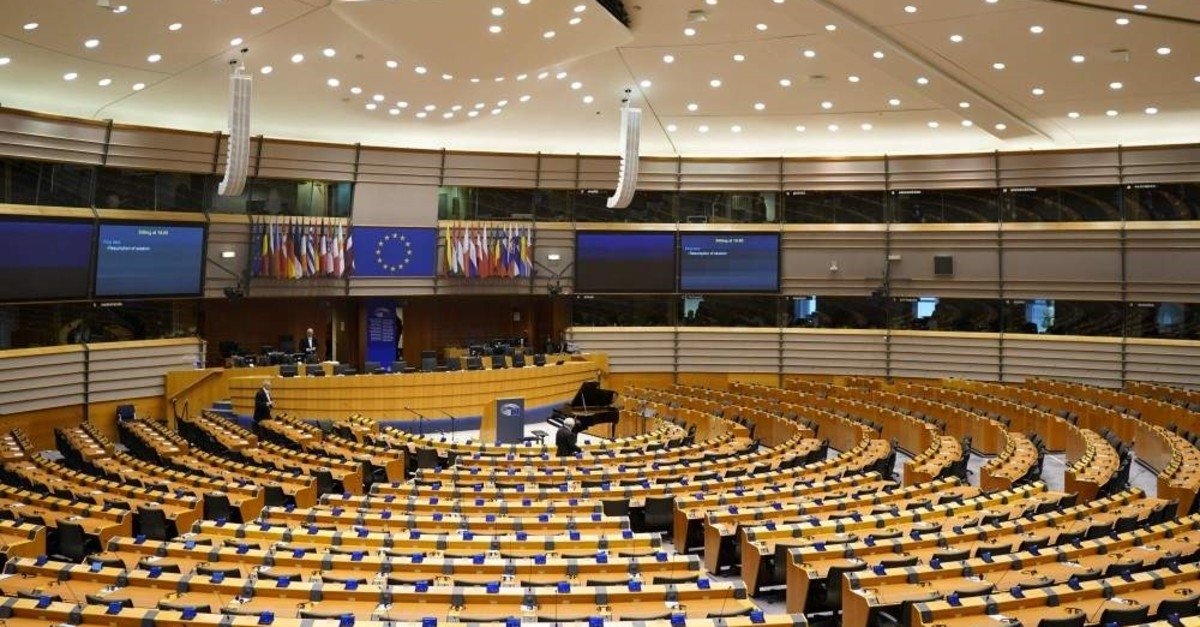 Greek European Parliament (EP) deputy Ioannis Lagos, a member of the racist Golden Dawn Party, was arrested in Belgium on Tuesday after the EP voted to lift his immunity Monday.

Lagos had previously attempted to provoke Turkey by tearing apart a piece of paper with the Turkish flag printed on it.

Although the voting was held in the parliament Monday, the results were announced Tuesday as 658 deputies overwhelmingly voted for the lifting of Lagos' immunity, while 25 deputies opposed. The Greek authorities had requested the lifting.

It was reported that the EP president, David Sassoli, will inform Greece about the result of the vote, and if an additional request is made, this will also be met under the authority of the parliament.

After this stage, Greece issued an international arrest warrant against Lagos which resulted in the far-right politician's arrest in Belgium. He reportedly may be deported to Greece if the authorities demand.

"I am in Belgian custody. Thieves, atheists, and anti-Greeks take me to prison," Lagos wrote on Twitter following his arrest which was also confirmed by Greek media sources.

Former Greek Parliament deputy Hritsos Pappas, another Golden Dawn Member, who was also sentenced to prison, has not yet been caught. Pappas is allegedly hiding in a country in the Balkans.

The Golden Dawn Party has been recognized as a "criminal organization" by a Greek court, and some party members, including Lagos, were sentenced to prison for leading this organization.

The party opposes migration and its members are known to be behind anti-Muslim and anti-Turkish attacks in Greece.

Lagos used his immunity to flee Greece for Brussels on Oct. 7, 2020, when he was handed down a 13-year prison sentence.

Lagos resigned from Golden Dawn after being elected as an EP deputy and established his own party under the name of "National People's Conscience."

Lagos, 47, had been previously arrested and sentenced for racist activities and other crimes.

"We don't hear anybody talk about the situation of Greek citizens. Everybody talks about migrants. What about the rights of the Greek citizens?" Anadolu Agency (AA) quoted the infuriated Lagos as saying.

"On the one hand, there is Turkey, which is doing whatever it wants to do," Lagos said, tearing a piece of paper with the Turkish flag printed on it. He said they need to put an end to the migrant flow.

Sassoli had later launched an investigation into Lagos' action.