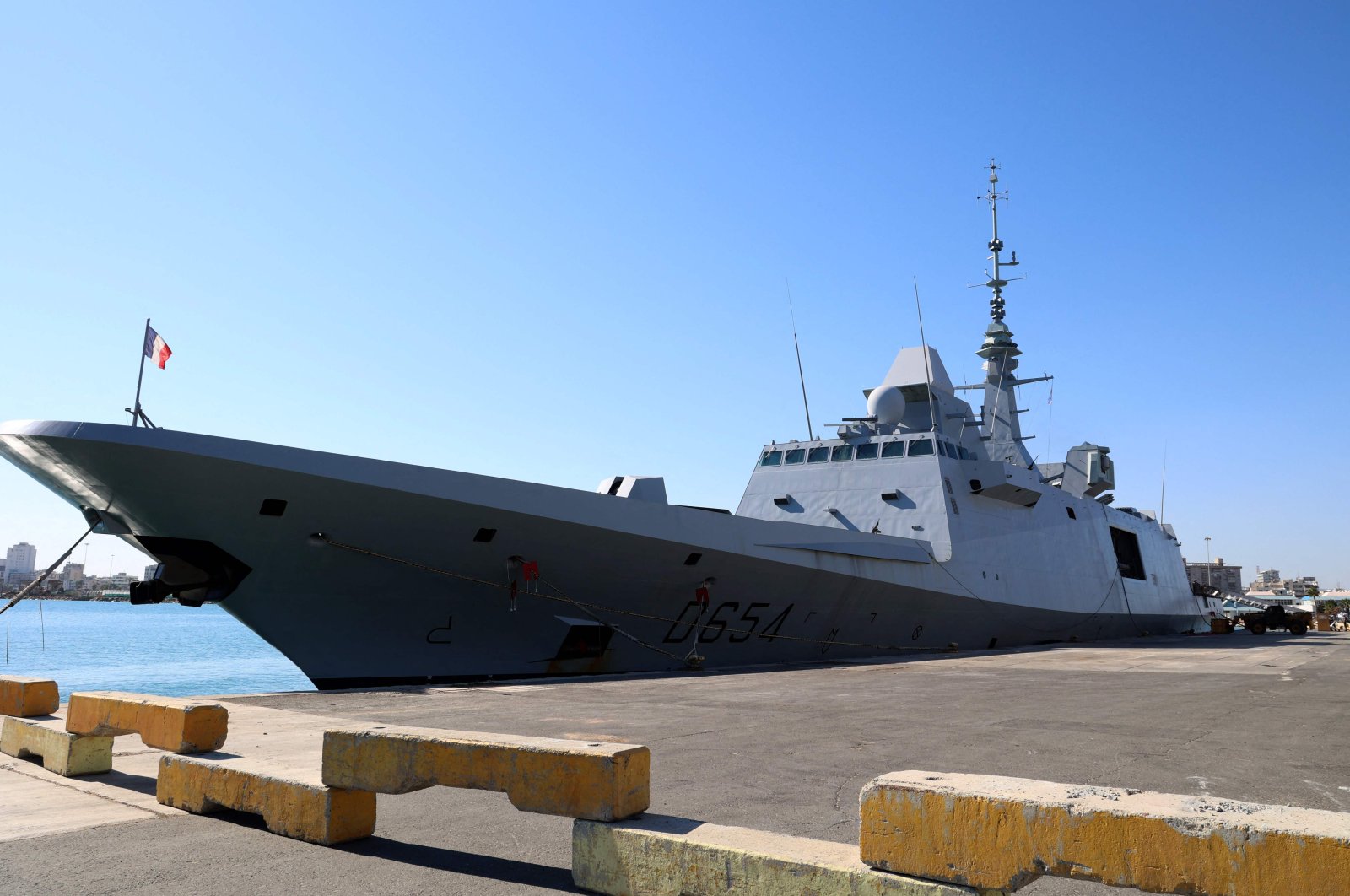 The French multi-mission frigate Auvergne is docked at the port of the Greek Cypriot coastal city of Larnaca, Nov. 8, 2021. (AFP Photo)
by Daily Sabah with AP Nov 09, 2021 9:05 am
RECOMMENDED

France on Monday toured the Eastern Mediterranean with its new frigate Auvergne, displaying its military muscle while underscoring what the ship's captain said was the importance that Paris attaches to ensuring security and stability in the region.

Captain Paul Merveilleux de Vignaux said the Auvergne with its 150-strong crew would be deployed in the Eastern Mediterranean until January to gather intelligence in order to “show how the respect of international law and especially freedom of navigation matters” to France.

“This deployment underlines how important France considers this part of the Mediterranean Sea,” as well as the country’s “willingness to contribute to the stabilization of this strategic area,” de Vignaux told reporters at the Greek Cypriot administration port of Larnaca.

The Auvergne was commissioned three years ago. It has advanced sonar equipment and specializes in anti-submarine warfare.

De Vignaux said this is the 12th time that the Auvergne has visited the coast of the Greek Cypriot administration, which he called key to supporting French naval operations in the region.

“There can’t be efficient and sustainable naval operations without support and Cyprus is the centerpiece of it,” de Vignaux said.

The French aircraft carrier Charles de Gaulle has also made repeated trips to the island.

France is also keen to point out its presence to Turkey. Furthermore, French energy company Total and its Italian partner Eni next year are expected to conduct offshore drilling in waters off Cyprus’ southern coast.

In February 2018, Turkish warships prevented a drillship leased by Eni from conducting exploratory drilling in waters southeast of the island. Turkey has sent drillships with a military escort to explore for energy on its continental shelf, stressing that it and the Turkish Republic of Northern Cyprus (TRNC) have rights in the region. To reduce tensions, Turkey has called for dialogue to ensure the fair sharing of the region's resources.

Tensions have recently increased once again due to activities in the region, especially with Greece and the Greek Cypriot administration.

Greece has often been embroiled in tensions with neighboring Turkey over a range of issues, from competing claims over hydrocarbon resources in the Aegean Sea to the demilitarization of islands. Moreover, Greece's burgeoning arms program is designed to counter Turkish challenges in the Eastern Mediterranean, against which France is among the few European Union states to have offered public support in past months.

The Greek Parliament last month ratified a defense deal struck with France for the purchase of three French-made Belharra frigates, an agreement criticized by Turkey.

In contrast to other EU and NATO allies, France strongly backed Greece and the Greek Cypriot administration last year when tensions were high, sending warships and fighter jets to the Eastern Mediterranean.

The announcement of boosting military ties with France comes after Turkey's Defense Minister Hulusi Akar stated recently that secondhand French Rafale jets will not change the power balance in the region.