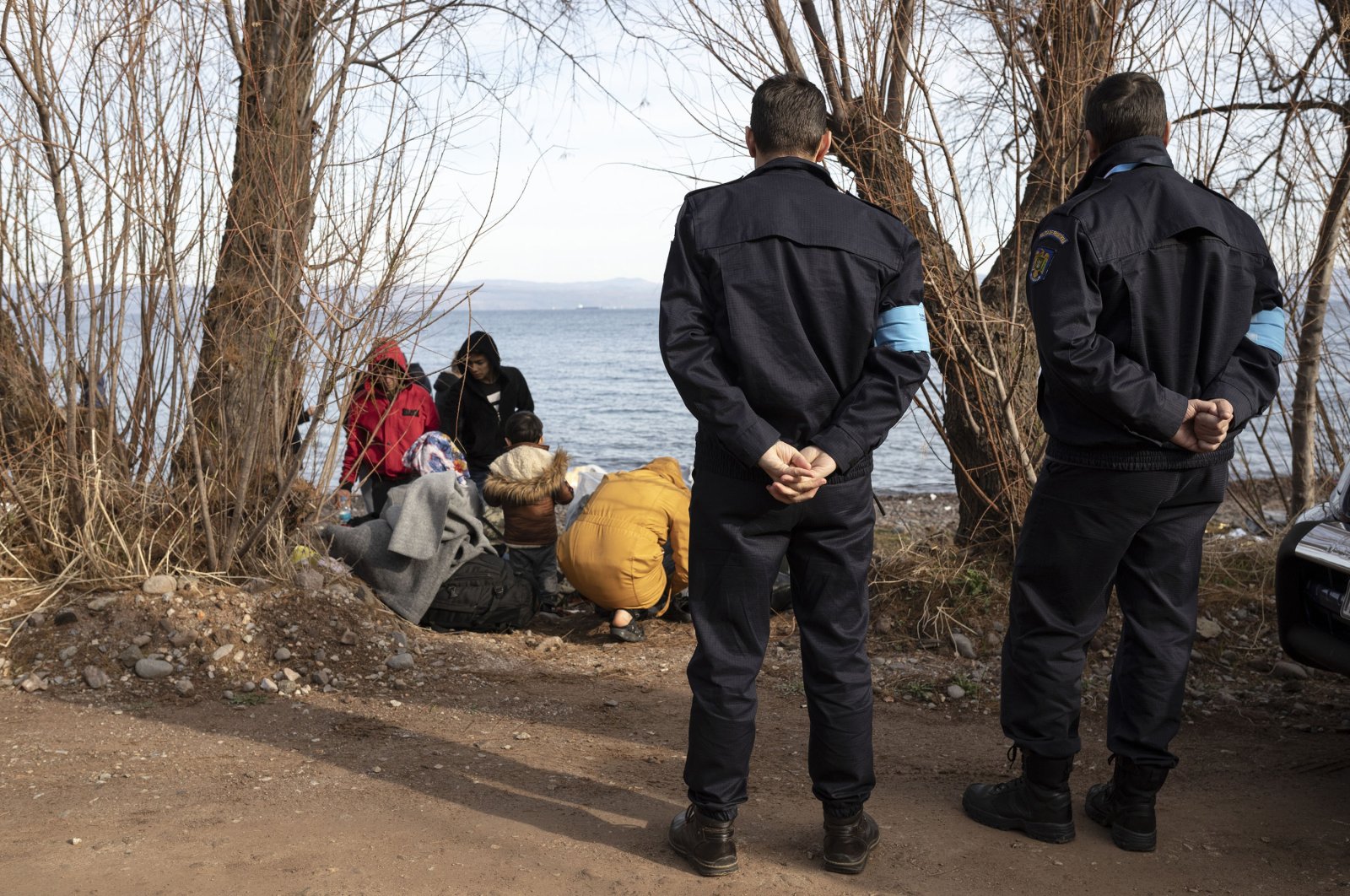 Frontex border officers stand by migrants from Afghanistan on the shore near the village of Skala Sikamineas on the island of Lesbos, Greece, March 1, 2020. (Photo by Getty Images)
by DAILY SABAH WITH AA Mar 05, 2021 11:46 am
RECOMMENDED

A European Union commissioner said Thursday that the bloc's border agency harmed its reputation by taking too much time to investigate alleged migrant pushbacks from Greek territorial waters toward Turkey in the Aegean Sea.

EU Commissioner for Home Affairs Ylva Johansson was speaking at the hearing of the European Parliament's special scrutiny group, dedicated to investigating the European Border and Coast Guard Agency's (Frontex) alleged participation in pushing back asylum-seekers and migrants.

"Investigation is important for the trust and reputation of the agency so that it (the allegations on pushback) could be clarified as soon as possible," Johansson said as quoted by the Anadolu Agency (AA).

"It has taken too long, and it hasn't been good for the reputation of the agency," the EU commissioner pointed out, referring to the fact that complicity in pushbacks was reported in October, and the EU agency only concluded a preliminary report by March.

"You should be prepared to deal with reports on incidents, misconduct or alleged pushbacks," Johansson added.

The head of the EU border agency, who also participated in the European Parliament's hearing, said that their internal investigation had not found any evidence on pushbacks.

"There was no substantiated, evidence-based facts or conclusions which say that Frontex would have participated in pushbacks or would have carried out violations of fundamental rights," Fabrice Leggeri insisted.

Earlier this year, the managing board of the Frontex said that it did not find evidence of rights violations in cases it reviewed where guards were accused of illegal migrant pushbacks from Greece toward Turkish territorial waters. But the body added that its conclusions only applied to some of the disputed incidents, saying it needs additional clarifications to complete the remaining reviews.

Leggeri has been under pressure for weeks over the allegations as Frontex takes on a greater front-line role in patrolling EU borders. EU lawmakers and activists have called for him to resign over the operations, but he has refused to, insisting the agency is key to the fight against human trafficking.

A working group of 14 members of the European Parliament was formed last week to investigate the EU border agency's involvement in pushbacks of asylum-seekers in Aegean waters.

In a statement issued last week, Turkey urged Athens and "all elements involved in pushbacks" to end their violations of international law, human rights agreements and a migration deal between the EU and Turkey.

The Turkish Foreign Ministry's statement cited two incidents on Feb. 23 and Feb. 24 in which Greek forces assaulted groups of asylum-seekers, took their valuables and left them stranded on an island in the middle of the Maritsa (Meriç) River.

Over 80,000 asylum-seekers have been pushed back to Turkey in the last four years, the ministry said, accusing Greece of pursuing a "systematic policy" for years on pushbacks with the involvement of Frontex.