Germany to host conference to push for lasting peace in Libya 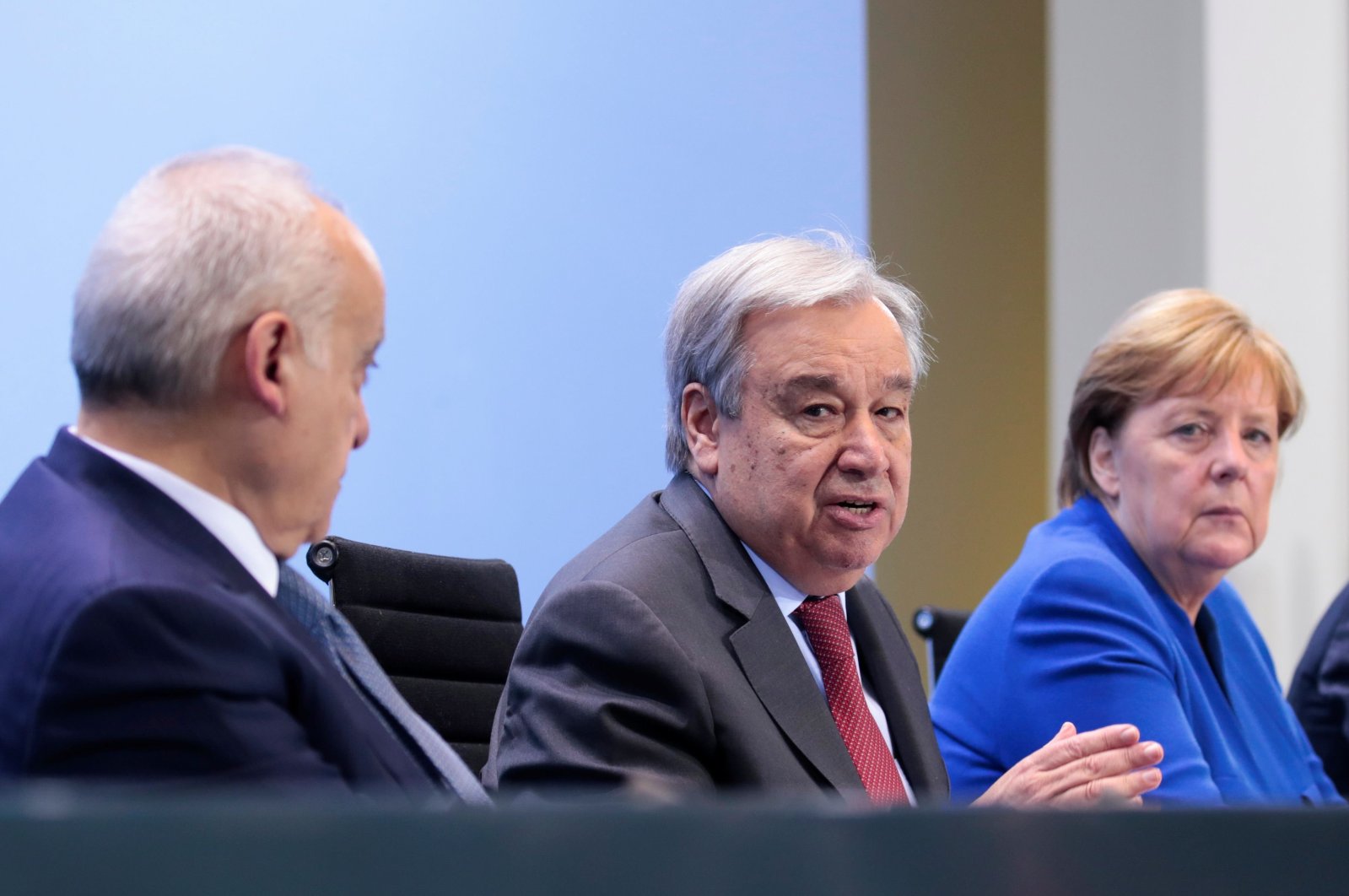 U.N. Secretary-General Antonio Guterres (C) speaks next to German Chancellor Angela Merkel (R) during a news conference at the end of a Peace summit on Libya at the Chancellery in Berlin on Jan. 19, 2020. (AFP File Photo)
by Daily Sabah with AFP
Jun 21, 2021 11:53 am

Germany will attempt to arbitrate a permanent solution for the Libyan crisis, as the sides will gather in Berlin to figure out a way to ensure that the country holds general elections in December.

The efforts to end a decadelong spiral of violence in Libya would bring the country's transitional government, as well as U.S. Secretary of State Antony Blinken, to Berlin for the in-person U.N.-sponsored talks.

Like host German Foreign Minister Heiko Maas, Blinken and Mangoush harked back to last year's meeting and the pledges made but which have not been fully implemented.

The presidents of Russia, Turkey and France had then vowed to end foreign meddling in Libya and withdraw foreign militants or troops.

Since those talks, a formal truce was agreed to last October that led to the creation of a transitional government under Prime Minister Abdul Hamid Dbeibah and a presidential council headed by Mohammad Younes Menfi, which have promised to hold polls.

Selected through a U.N.-led process, Libya’s new unity government, the Government of National Unity (GNU), was sworn in on March 15, 2021. It is derived from two rival political groups that ruled the country's eastern and western regions, completing a smooth transition of power after a decade of violent chaos. Dbeibah will lead Libya to the Dec. 24 elections.

In October, after Turkey-backed forces of the internationally-recognized Government of National Accord (GNA) based in Tripoli routed those of eastern putschist Gen. Khalifa Haftar, the two camps agreed to a cease-fire in Geneva.

The security situation in Libya has been slowly improving since then.

But the presence of an estimated 20,000 foreign fighters and mercenaries on Libya's territory is seen as a threat to the U.N.-backed transition leading to the elections.

Western leaders have repeatedly called on the foreign fighters to depart.

But Russian mercenaries supporting Haftar's side in the east of the country are still in place.

Turkey meanwhile has troops in Tripoli, sent under a bilateral agreement with the government, implying that they are not affected by a request for foreign troops to leave.

In 2019, Ankara and Tripoli reached two separate memorandums of understanding (MoU), one on military cooperation and the other on the maritime boundaries between the two countries in the Eastern Mediterranean.

Diplomats underlined the delicate balancing act needed to ensure that neither side feels it is losing out by withdrawing.

Jalel Harchaoui, Global Initiative senior fellow and an expert on Libya, said Wednesday's talks must go beyond a simple declaration of intent if they are to make a real impact.

"Is there a mechanism for (the fighters) to leave? Are Libyans pushing for them to leave in real life on the ground? No," he said.

But he voiced hope that the talks would bring tangible help to the upcoming elections.

"Somebody could come up with a good idea of agreeing on a constitutional basis in July and be on course for elections in December," he said, referring to a key requisite for the polls.

"I think there's a good chance (for elections by year's end) and the Berlin process could help."