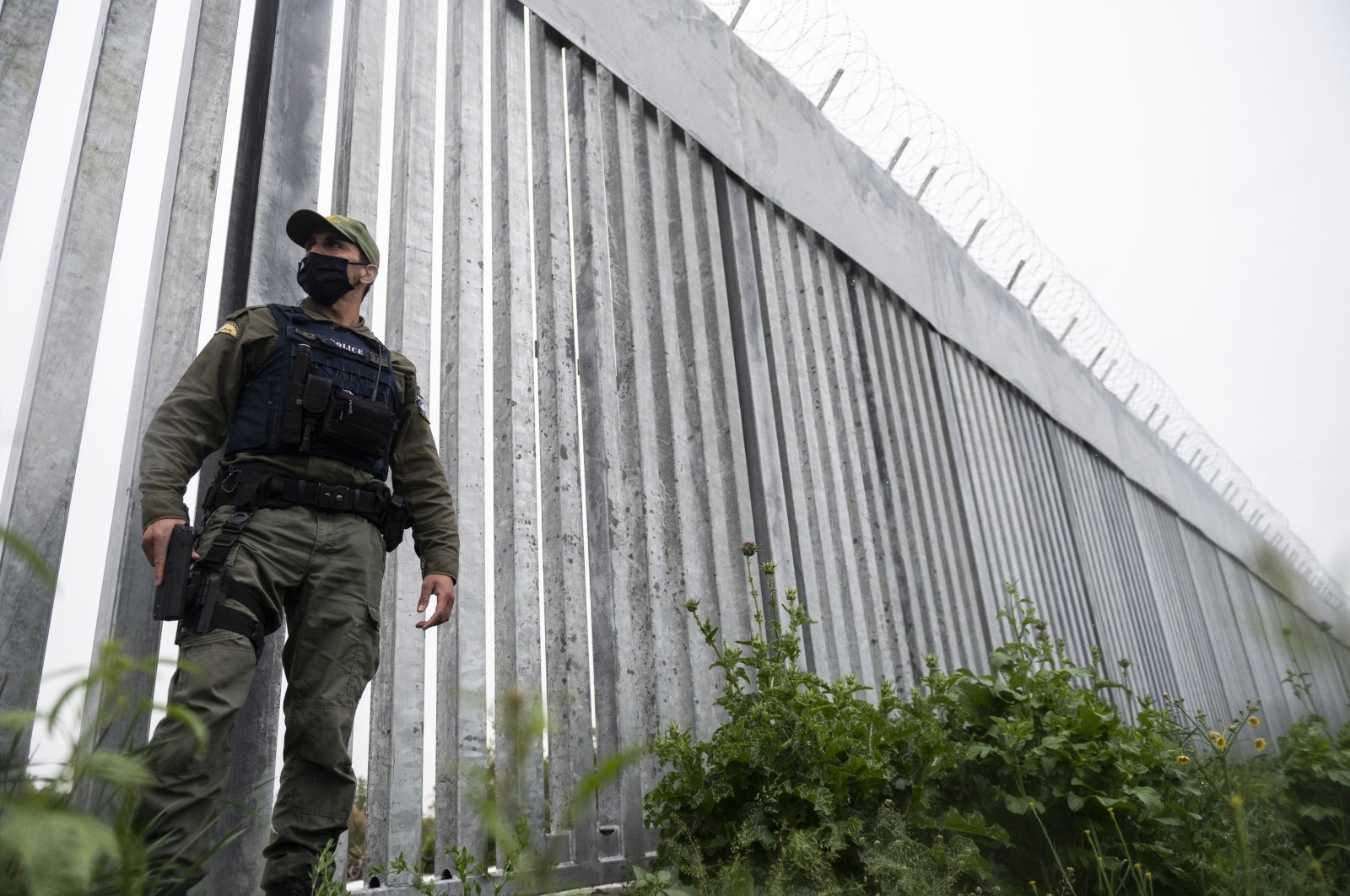 A police officer patrols alongside a steel wall at Evros river, near the village of Poros, at the Greek -Turkish border, Greece, May 21, 2021. (AP Photo)
by DAILY SABAH WITH AGENCIES Aug 24, 2021 8:54 am
RECOMMENDED

The return of the hardline group to power in Kabul on Aug. 15 has plunged the future of many Afghans into uncertainty and sparked concern that millions may head to Europe as they flee the war-torn country.

Mitsotakis said, "It is important for the European Union to support the countries close to Afghanistan, in order to make sure that we won't have additional flows in Europe."

During a meeting on Monday with European Parliament Vice President Roberta Metsola, Mitsotakis said that Greece has managed to avert mass migration in the past and will do so "with the same policy" this time as well.

Also on Monday, government spokesperson Yannis Oikonomou said that Athens will not "take lightly any possible escalation of the immigration and refugee issue."

Greece is reinforcing its land border with Turkey, officials said, with local reports detailing that a 40-kilometer (25-mile) extension of the fence in Evros is in its final stages.

New drones, cameras and radars have been installed and an additional 250 border guards will also soon be hired.

"The two leaders discussed the necessity of supporting (Afghanistan's) immediate neighbors so Afghans stay as close to home as possible," the Greek government said.

Mitsotakis also touched on the call, underlining that "it is for the benefit of Turkey and Greece to limit migrant flows."

"I spoke with President Erdoğan and believe that it is in our common benefit that migrant flows are limited in region's close to Afghanistan."

Greece currently hosts 40,000 Afghan asylum-seekers and refugees, who currently make up most migrants arriving in Greece, according to the U.N. High Commissioner for Refugees.

Greece was on the front line of the migrant crisis in 2015 when more than a million people crossed from Turkey into the EU.

Turkey is similarly reinforcing its border with Iran in the face of the recent developments in Afghanistan.

The beefed-up border measures in Turkey, which already hosts nearly 4 million Syrian refugees and is a staging post for many migrants trying to reach Europe, began as the Taliban started advancing in Afghanistan and took over Kabul last week.

Authorities plan to add another 64 kilometers (40 miles) by the end of the year to a border wall started in 2017. Trenches, barbed wire and security patrols around the clock will cover the rest of the 560-kilometer frontier.

The Turkish side of the mountainous border with Iran is lined by bases and watchtowers. Patrol vehicles monitor around the clock for movement on the Iranian side, from where migrants, smugglers and terrorists frequently try to cross into Turkey.

Furthermore, in a phone call with European Council President Charles Michel, Erdoğan highlighted that Turkey has been fulfilling its responsibilities and expects EU member-states to do the same amid the ongoing crisis in Afghanistan, as he called on the bloc to materialize all terms of the 2016 agreement and restart Turkey’s accession negotiations.

He also said Turkey has received requests to accept local Afghan staff working for the EU mission in Afghanistan, and that EU member states have only opened their doors to a small fraction of the Afghan people who have served them and are now in a difficult position. The president noted that the EU cannot expect Turkey to undertake international responsibilities of other countries.