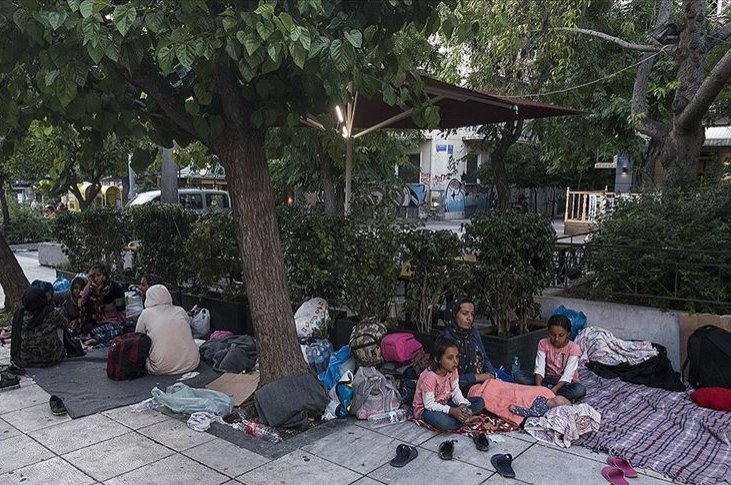 An Afghan family spends the night outside after being expelled from Greece's Moria camp and having nowhere else to go, Athens, Greece, June 15, 2020. (AA Photo)
by DAILY SABAH Aug 21, 2020 11:57 am
Edited By Dilara Aslan
RECOMMENDED

The Greek government announced that it was throwing more than 11,000 refugees out on the street, including the elderly, families with children, women who are pregnant women or alone in Greece and people with disabilities, just as the coronavirus pandemic has rebounded around the globe.

According to Human Rights Watch (HRW), starting on June 1 refugees were told to leave government-provided housing in apartments, hotels and camps.

In a statement published on Aug. 20, HRW noted that cash assistance from the European Union ends once people are formally recognized as refugees, leaving them without financial support in the country where they live.

HRW interviewed a 21-year old Afghan refugee who was told she had just a few days to leave her tent in Moria camp on Lesbos island after she was granted asylum.

“They said that if they come again and find me (in the tent), they will take me by force. I felt fear and despair because I am on my own; I didn’t know where to go,” the refugee told HRW.

Many refugees who are thrown out of camps leave for mainland Greece and live in central Athens’ Viktoria Square.

“There, dozens of families are sleeping on blankets or pieces of cardboard in stifling heat. I saw children playing near dangerous electric wires and garbage. Migrant associations and some citizens are distributing food and water, but nearby shop owners are increasingly hostile,” HRW’s Eva Cosse said.

Another refugee, a 75-year-old man from Afghanistan, told HRW that riot police beat him twice with a baton on Aug. 2 for objecting to the relocation.

“Making things worse, the government announced plans to shut at least 60 out of the 92 reception facilities on mainland Greece,” HRW said as it urged Greek authorities to listen and provide suitable alternatives to refugees on the streets, particularly families with children, people with disabilities, older people and single women.

There are over 33,000 asylum-seekers and migrants packed into camps on the islands of Lesbos, Chios, Samos, Leros and Kos which were originally built to handle fewer than 6,100 people.

Lesbos lies just off the Turkish coast, and hundreds of thousands of migrants and refugees have used the island as a staging area in recent years in their attempt to get to mainland Europe.