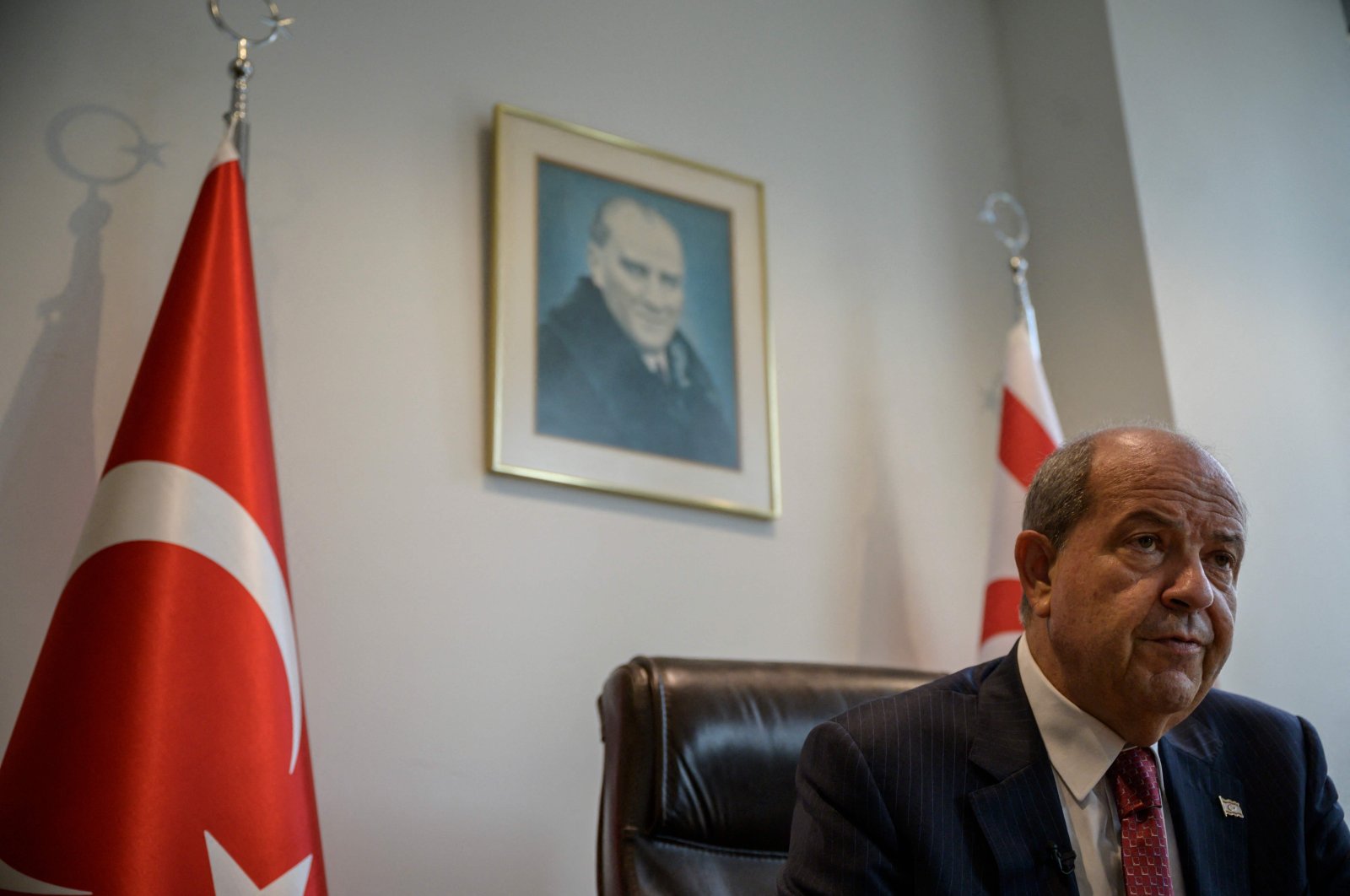 The Greek Cypriots' decision to continue the current status quo on the divided island is unrealistic, the President of the Turkish Republic of Northern Cyprus (TRNC) Ersin Tatar said on Saturday.

Tatar’s statements came following his meeting with United Nations Secretary-General Antonio Guterres on the sidelines of the 76th session of the U.N. General Assembly in New York.

The two exchanged views on the Cyprus issue, according to a statement by the U.N.

“The sole truth on the island is the acceptance of the equal sovereignty of the Turkish Cypriot side and their rights from the past,” Tatar told the Nicosia (Lefkoşa) based BRT news.

Tatar said he told Guterres that the island requires a two-state solution and that comprehensive official negotiations could only start after the Turkish Cypriot's side is accepted as an international actor.

He added that the Greek side’s suggestion to continue the Crans Montana talks is not realistic either and that the secretary-general knows the process well.

Alarmed by a spike in tensions, the U.N. chief is preparing new talks on divided Cyprus but little progress is expected as the two leaders put forward ideas strongly rejected by the other.

Tatar on Monday will attend a tripartite meeting and will meet with Greek Cypriot leader Nicos Anastasiades at a luncheon to be hosted by the U.N. secretary-general.

Secretary-General Antonio Guterres last held talks with the Greek Cypriot and Turkish Cypriot leaders in April in Geneva, making a rare pandemic trip but concluding that there was little common ground.

"I never run away from talks. I am prepared to talk but to talk realistically about what is on the ground," he told Agence France-Presse (AFP).

"If you are going to really have a realistic chance of settlement, that settlement should be based on two equal, sovereign states."

Diplomats say that Guterres' personal investment in Cyprus is not rooted in any naive expectation of a breakthrough but in keeping enough diplomacy alive to prevent a flare-up on the island which, however intractable the political dispute, has remained mostly peaceful for decades.

Speaking Friday before the General Assembly, Anastasiades also floated a return to the 1960 constitution that took force after independence from Britain in which the island would have a Greek Cypriot president and Turkish Cypriot vice president.

Hopes for a diplomatic solution have been dim since 2004 when Greek Cypriot voters rejected a unification plan by former U.N. chief Kofi Annan.

Tatar, speaking in a towering new Turkish mission, the Turkish House, inaugurated by President Recep Tayyip Erdoğan across from the U.N. headquarters, said the two sides were already effectively separate, with Greek Cypriots and Turkish Cypriots having no influence on each other's lives.

"We have so many things happening in the last 60 years that going back to 1960 is impossible," Tatar said.

He said that two separate states would have friendly relations, with cooperation in areas including energy and the environment, and mused that Cyprus could become "the Singapore of Europe in the Eastern Mediterranean" as a vital trade hub.

The Cyprus problem has also added up to tensions between Ankara and Athens, which had already been rowing over drilling rights and maritime borders in the Eastern Mediterranean as well as the status of islands in the Aegean.

Turkey, which has the longest continental coastline in the Eastern Mediterranean, has rejected maritime boundary claims made by Greece and the Greek Cypriot administration, stressing that these excessive claims violate the sovereign rights of both Turkey and Turkish Cyprus.