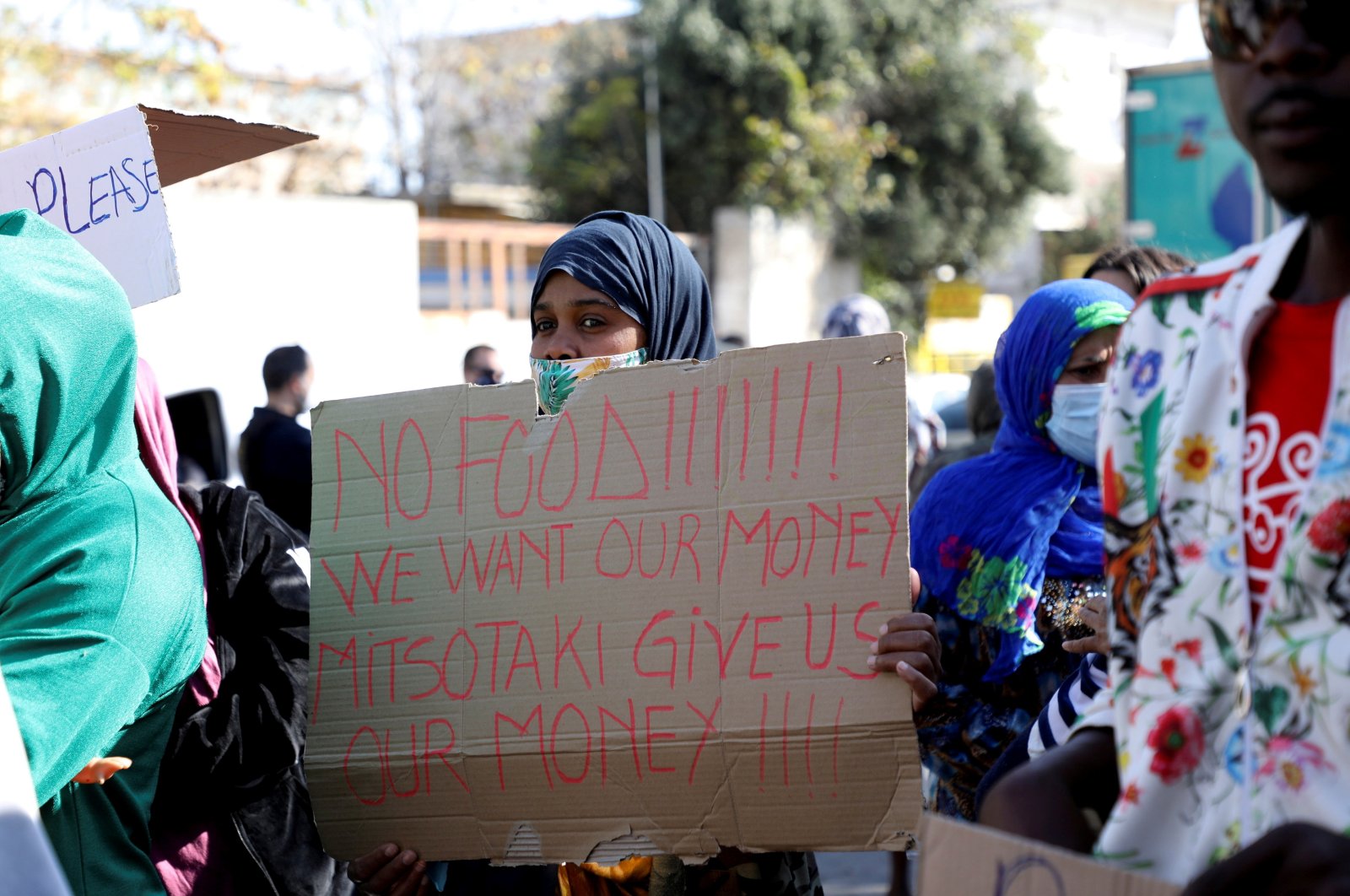 A migrant holds a placard as refugees and migrants protest against the poor living conditions in the Eleonas refugee camp and its imminent closing, outside the camp, in Athens, Greece, November 4, 2021. REUTERS/Louiza Vradi
by ASSOCIATED PRESS Nov 15, 2021 12:01 pm
RECOMMENDED

Greece's policy against migrants has taken a cruel turn as the country criminalizes rescue operations for migrants with severe punishment.

Among the prison inmates on the Greek island of Chios, three young men from Afghanistan and Somalia are serving unusually long sentences: 50 years for two of them, and a staggering 142 for the third.

However, these are not violent criminals, even according to their trial verdicts. They were convicted for steering an inflatable dinghy (boat) carrying them and other migrants after they say smugglers abandoned them in the Aegean Sea between Turkey and Greece.

“I didn’t think saving people is a crime,” said Hanad Abdi Mohammad, 28, a soft-spoken Somali charged as a smuggler after arriving in Greece last December and sentenced to 142 years.

Mohammad told journalists and European Parliament lawmakers visiting the three in prison last week that he had no choice but to drive the boat. The smuggler forced him to take over, hitting him in the face and threatening him with a gun before abandoning the dinghy in rough seas. And people’s lives were at stake. Even with hindsight, he said, “I would do it again, as long as I am saving lives.”

Critics say the men's cases, as well as prosecutions or threats of criminal proceedings against aid workers, illustrate the expanding arsenal of techniques authorities in Greece and other countries are using to deter asylum-seekers.

“It’s not possible that someone who comes to claim asylum in Greece is threatened with such heavy sentences simply because they were forced, by circumstances or pressure, to take over handling a boat,” said Alexandros Georgoulis, one of the lawyers representing the three imprisoned in Chios.

Greek authorities, he said, "are essentially baptizing the smuggled as the smuggler.”

Mohammad's journey is also a stark indication of the chaos asylum-seekers may experience as they migrate between two countries long divided by deep-seated mistrust.

Aid workers and volunteers have also found themselves in the crosshairs of Greek authorities. In one widely publicized case, Syrian human rights worker Sarah Mardini, a refugee herself, and volunteer Sean Binder were arrested and detained for months in 2018 on suspicion of espionage, money laundering and a litany of other offenses. They deny all charges and say they were doing nothing more than helping rescue people.

It's not just Greece. According to the European Union Agency for Fundamental Rights, Germany, Italy, Malta, the Netherlands, Spain and Greece have initiated 58 investigations and legal proceedings since 2016 against private entities involved in search and rescue.

“I think it’s important to challenge these in the courts, to not at all sit back and accept that we should be cast as smugglers or spies because I offered CPR, (or) more often than not just a smile, to someone in distress,” Binder told the Associated Press (AP). “It is preposterous that we should be cast as criminals. I don’t accept it ... It doesn’t matter who you are, you don’t deserve to drown in the sea.”

Binder and Mardini go on trial on the island of Lesbos on misdemeanor counts of espionage, forgery and unlawful use of radio frequencies on Nov. 18. They face a maximum eight-year sentence, convertible into a fine. They are still under investigation for felonies which could carry 25 years of imprisonment.

Dimitris Choulis, a lawyer on the island of Samos who frequently represents asylum-seekers and is not involved in Binder's case, thinks criminal prosecutions or threats of prosecution are partly designed to deter nongovernmental organizations (NGOs) from documenting practices such as the illegal summary deportation of migrants before they can apply for asylum.

“The only way to stop humanitarian organizations from watching what is happening in the Aegean is to criminalize rescue,” said Choulis, who along with Georgoulis is representing the three men imprisoned in Chios.

Most cases involving NGOs are intended more to intimidate than to win convictions, Choulis argues, noting most remain in the investigative phase. Three years after his arrest, Binder has yet to be charged with any of the felonies he's under investigation for.

In July, Greek police announced a felony investigation into 10 people, including four foreign NGO workers, on migrant smuggling allegations. No charges have resulted so far.

The short but often perilous sea crossing from Turkey to nearby Greek islands is a popular route to enter Europe for people fleeing conflict and poverty in Africa, Asia and the Middle East. To crack down on smuggling, Greece introduced a law in 2014 imposing severe penalties on people smugglers: 10 years imprisonment for each smuggled person, or 15 years per person if there was a danger to life and life imprisonment if someone died.

But smugglers quickly adapted. Instead of ferrying people themselves, they persuaded or forced their passengers to drive the boats, something borne out by numerous testimonies of arriving asylum seekers. The result has been the convictions of migrants as smugglers.

“Our prisons are full of asylum-seekers who drove a boat,” Choulis said. “This is absurd.”

Although the sentences are draconian – apart from Mohammad's 142 years, Afghans Amir Zaheri and Akif Rasouli, both in their 20s, received 50 years each – actual servable time under Greek law is capped at 20 years, reducible to 12 with good behavior. With prison work counting toward sentence reduction, they could be released after about eight years.

Still, that’s a long time to spend incarcerated instead of building a new life.

Zaheri, accompanied by his pregnant wife and young child, and Rasouli arrived in the same boat about two years ago. From different parts of Afghanistan, they had never met before. Like in Mohammad’s case, the smuggler abandoned their dinghy and the passengers took turns steering, they said.

Both were tried as smugglers. They saw their court-appointed lawyer for the first time at their trial, which lasted just a few minutes. The judge spent a minute each asking them questions, Rasouli said.