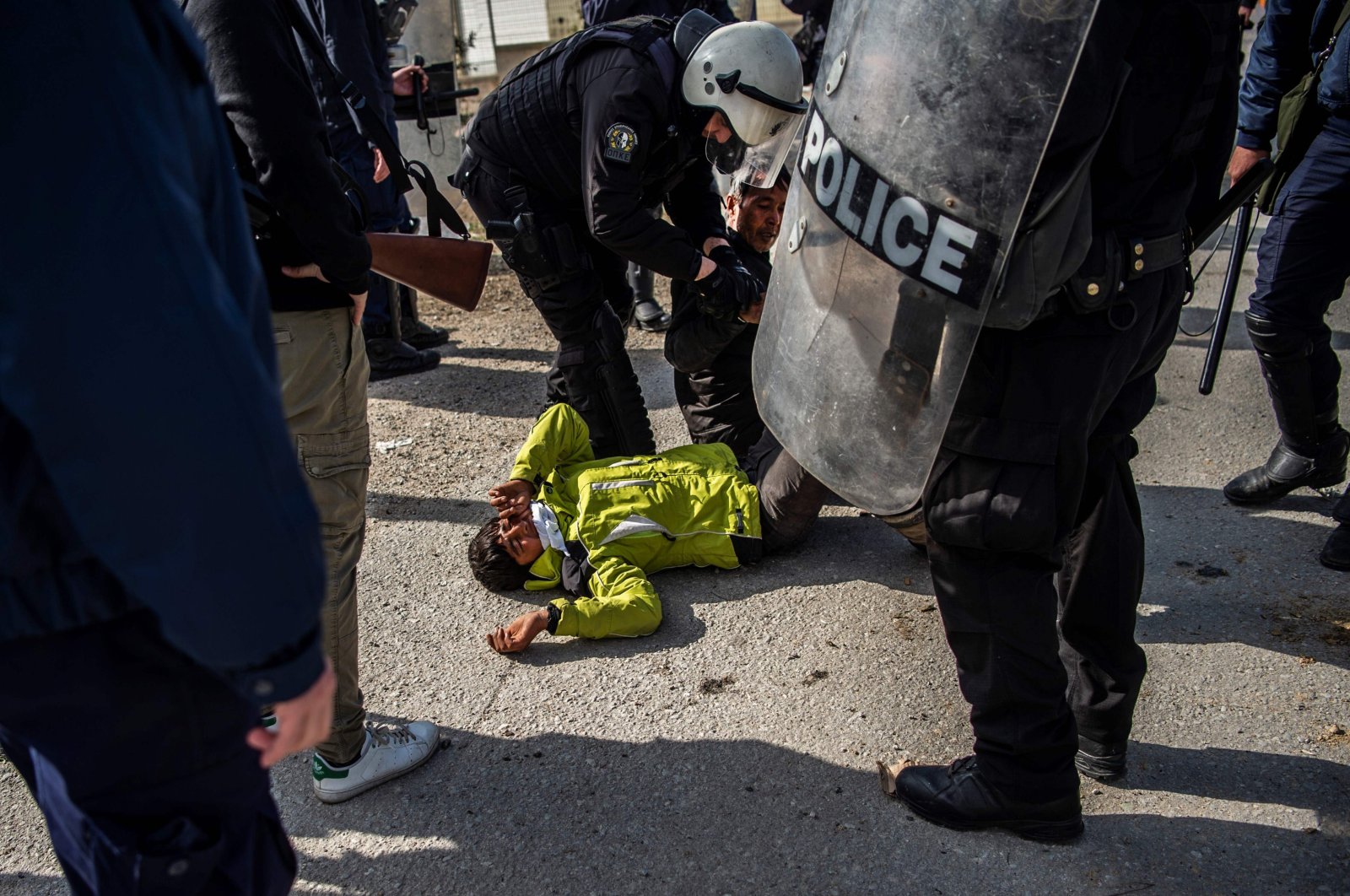 Riot police detain a migrant near the Moria camp for refugees and migrants, on the island of Lesbos, March 2, 2020 (AFP Photo)
by DAILY SABAH Aug 20, 2020 11:43 am
Edited By Dilara Aslan
RECOMMENDED

Greek Prime Minister Kyriakos Mitsotakis on Wednesday denied once again allegations that Athens was illegally pushing back asylum-seekers at sea, defended its "tough but fair" border management, and accused Turkey of peddling "misinformation."

"If there's any incident that needs to be explored, if there's any exaggeration at any given point, I'm going to be the first to look into it," Mitsotakis told CNN.

"Greece is a country that respects the rule of law, we've granted asylum to tens of thousands of people," the prime minister said.

The New York Times on Aug. 14 reported Greece was "abandoning" migrants at sea for the Turkish coastguard to rescue. It said it had interviewed survivors from five such episodes and cited additional evidence from independent watchdogs, two academic researchers and the Turkish Coast Guard. Based on its research, the Times said more than 1,000 asylum seekers had been "dropped at sea" since March. Mitsotakis, however, said the reports "essentially originate from Turkey."

"Some of these reporters, who do these types of exploratory journalism, should be more careful in checking their sources," he said.

"These types of reports are also an insult to our coast guard (which) has saved literally tens of thousands of refugees and migrants at sea, and our islands have always provided shelter to those in greater need," Mitsotakis said.

Rights groups including the U.N. refugee agency have repeatedly called on Greece to investigate pushback claims.

"Such allegations have increased since March and reports indicate that several groups of people may have been summarily returned after reaching Greek territory," the U.N. High Commissioner for Refugees (UNHCR) said in June.

On July 16, Human Rights Watch (HRW) in a statement said that Greek law enforcement officers have returned asylum seekers and migrants at the land and sea borders with Turkey during the COVID-19 lockdown. "The officers in some cases used violence against asylum seekers, including some who were deep inside Greek territory, and often confiscated and destroyed the migrants' belongings," it added.

In a separate statement on March 17, the rights group said: "Greek security forces and unidentified armed men at the Greece-Turkey land border have detained, assaulted, sexually assaulted, robbed and stripped, asylum seekers and migrants, then forced them back to Turkey," while it also accused the EU of "praising Greece’s border control measures and provided support through the European Border and Coast Guard Agency (FRONTEX)."