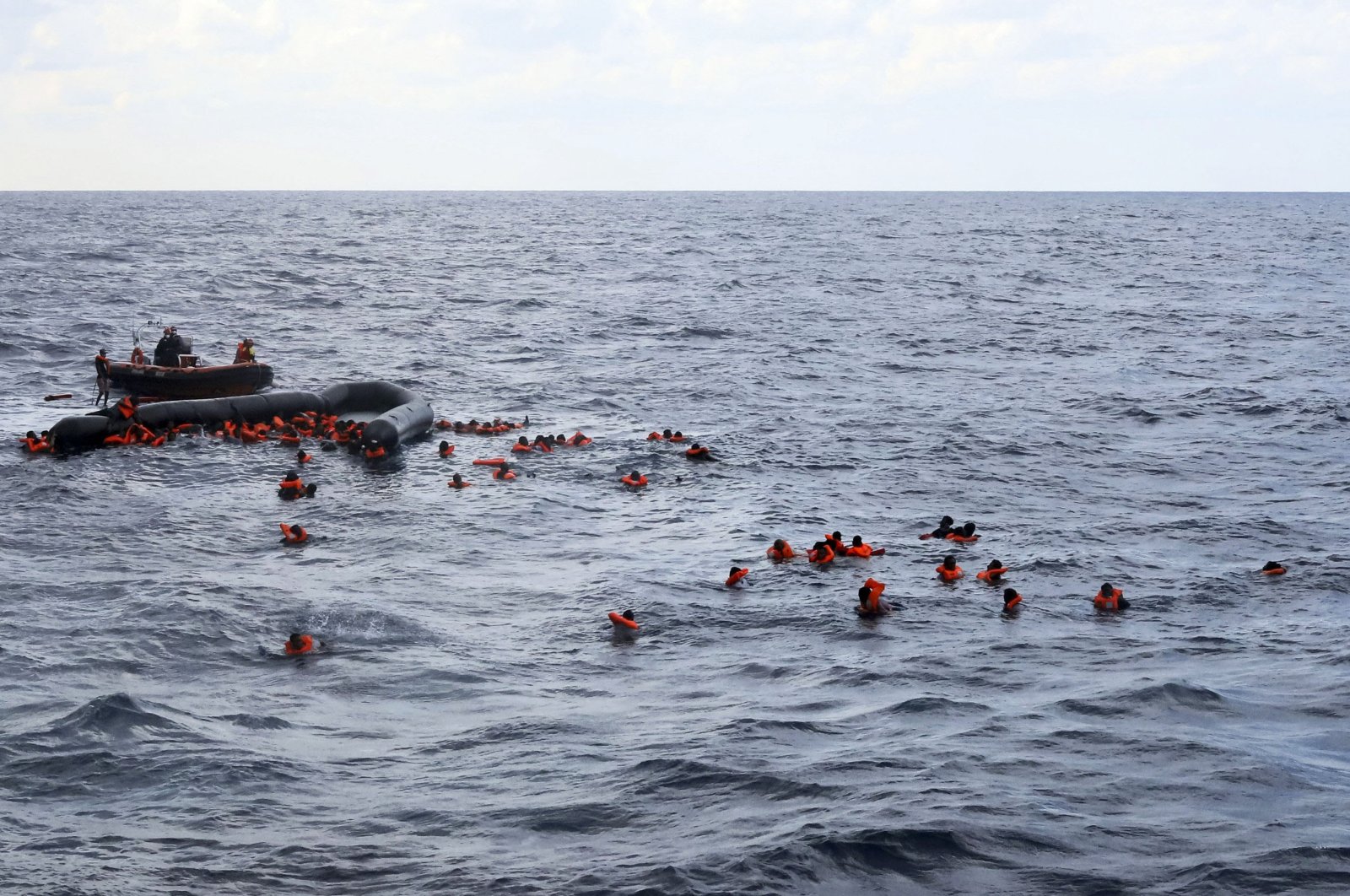 Refugees and migrants are rescued by members of the Spanish NGO Proactiva Open Arms, after leaving Libya trying to reach European soil aboard an overcrowded rubber boat in the Mediterranean Sea, Wednesday, Nov. 11, 2020. (AP File Photo)
by Daily Sabah with DPA Jun 14, 2021 9:44 am
RECOMMENDED

Pope Francis referred to the Mediterranean Sea, the route most used by irregular migrants to cross into Europe with the hope of finding a better life, as the "largest cemetery in Europe."

Francis, who frequently draws attention to the plight of refugees, made the remark in front of believers gathered in St. Peter's Square in the Vatican on Sunday.

He also spoke about a new memorial installed in the Sicilian city of Syracuse, off which many migrants drowned in 2015 when the boat they were traveling in sank.

The Italian navy recovered the wreckage a year later, and it now serves as a tribute to the dead.

"May this symbol of many tragedies in the Mediterranean continue to appeal to the conscience of all," the head of the Catholic Church said.

Again and again, migrants in small and unstable boats dare to make the perilous crossing to the European Union from North Africa. The intended destination is often Italy.

According to United Nations figures, more than 670 migrants have already died in the central Mediterranean this year.

On Sunday, the Doctors Without Borders rescue ship Geo Barents was carrying 410 migrants, many of them women and children, who were intercepted in recent days.

The aid group said it was seeking a port where it can safely disembark the passengers.

"They have been through harrowing journeys and are exhausted. Let them reach a place of safety now. Show humanity and allow the immediate disembarkation," Doctors Without Borders tweeted.

Several private sea rescue organizations operate in the central Mediterranean, mostly off the coast of Libya, from where migrants in small boats repeatedly venture forth.

But other investigations note the death figure is actually much higher due to pushback by some countries in the bloc. For instance, an investigation by the Guardian noted that EU member states were involved in pushing back some 40,000 migrants and refugees into Turkish waters, resulting in the deaths of over 2,000 individuals during the pandemic.

The report noted that Greece, Croatia, Italy, Spain and Malta have been paying non-EU states and private vessels to intercept boats carrying migrants and force them to detention centers.

Greece has also pushed thousands of migrants and refugees from its shores and has frequently been criticized by Turkey over pushbacks.

Pushbacks are considered contrary to international refugee protection agreements that say people shouldn’t be expelled or returned to a country where their life and safety might be in danger due to their race, religion, nationality or membership in a social or political group. Such actions prevent asylum-seekers from making claims for refugee status and if practiced indiscriminately against a group of migrants it can constitute refoulement – a violation of EU human rights laws and the 1951 Geneva Convention.

Frontex head Fabrice Leggeri has been under pressure for months over pushback allegations as Frontex takes on a greater frontline role in patrolling EU borders. EU lawmakers and activists have called for him to resign over the operations, but he has refused, insisting the agency is key to the fight against human trafficking. A working group of 14 members of the European Parliament was formed to investigate the EU border agency's involvement in pushbacks of asylum-seekers in Aegean waters.

Whether Frontex is willing to hold itself liable for the numerous pushbacks and violations against migrants and asylum-seekers at Greece's border with Turkey has come into question, Human Rights Watch (HRW) said in a report