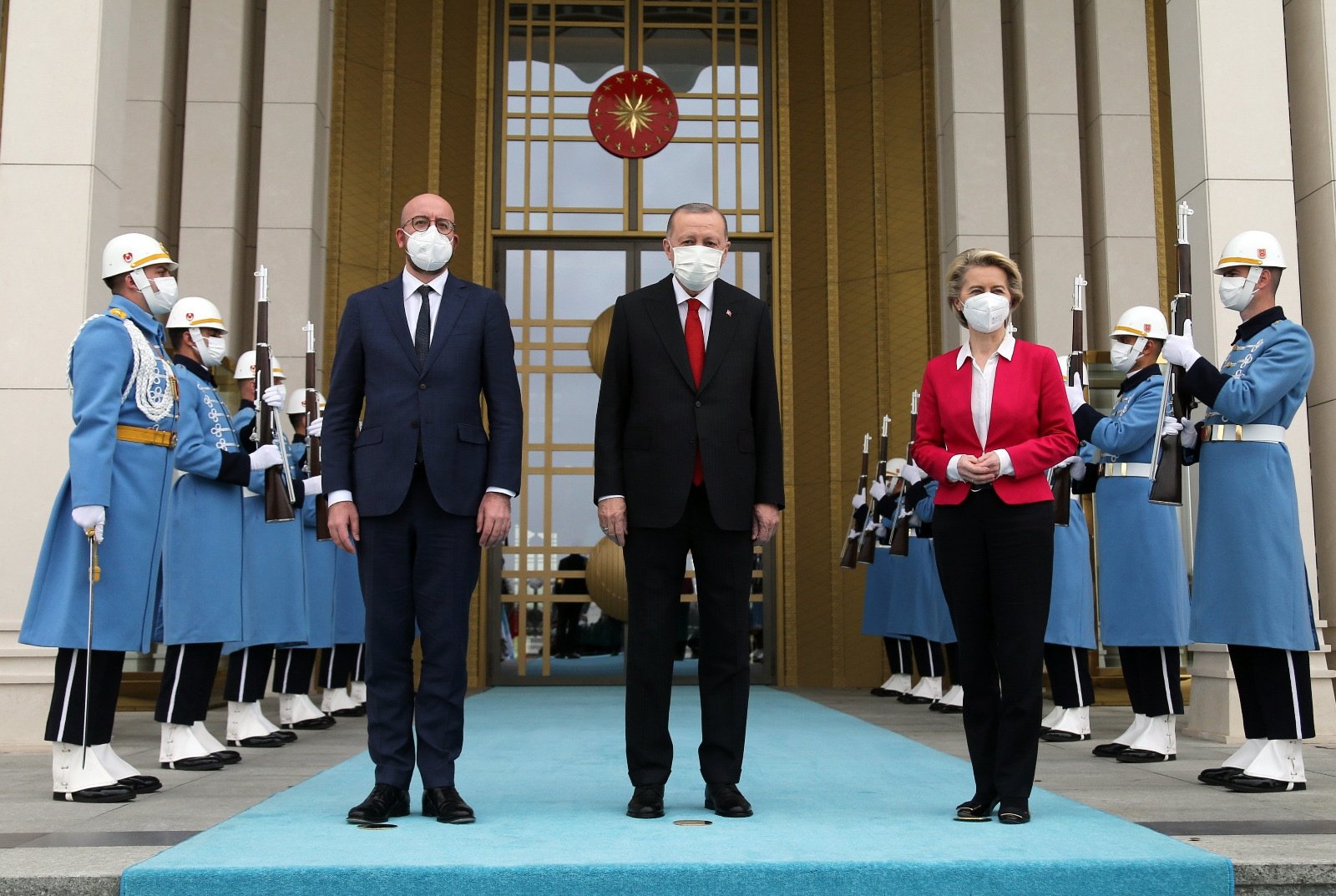 European Union leaders on Tuesday said the bloc is ready to support a concrete and positive agenda with Turkey, especially in the areas of economic cooperation and migration, after President Recep Tayyip Erdoğan received the head of the European Council, Charles Michel, and the head of the European Commission, Ursula von der Leyen, in Ankara to discuss bilateral ties and seek a way forward after tensions rose high last year.

Michel said they had a frank discussion with President Erdoğan on the future of EU-Turkey relations, while von der Leyen said the meeting aimed to give ties “new momentum.”

Speaking on the main agenda that covered Turkey-EU relations last year, the Eastern Mediterranean, Michel stated: "We welcome a continuation of exploratory talks and the visit of the Greek foreign minister. We have witnessed a de-escalation, this is a positive development." He also welcomed the upcoming Cyprus talks to take place under the auspices of the United Nations.

The EU's strategic interest, security and stability in the Eastern Mediterranean is of mutual benefit and helps positive relations with Turkey, Michel added.

In Ankara, ready with @vonderleyen to start discussion with @RTErdogan on the future of EU-Turkey relations.

Turkey withdrew the vessels, somewhat cooling tensions, and this year participated in the first maritime talks with Greece since 2016.

Turkey and EU member Greece have been at odds on several issues. Turkey, which has the longest continental coastline in the Eastern Mediterranean, has rejected maritime boundary claims made by Greece and the Greek Cypriot administration, stressing that these excessive claims violate the sovereign rights of both Turkey and the Turkish Republic of Northern Cyprus (TRNC).In order to find a solution to the dispute that favors all parties, last year Turkey also proposed holding a conference with the participation of each Mediterranean nation, including the Turkish Cypriots, but the EU has yet to provide a concrete answer to the proposal.

Michel stated that foreign policy issues were also on the agenda of the visit. "Differences remain in foreign policy issues," he said, highlighting that areas of cooperation also exist especially in Libya, where the war-torn country has entered a path to normalcy and elections. He reiterated, "All foreign fighters and troops must leave Libyan territory."

Erdoğan also pointed to the need for cooperation against terrorism for permanent stability and security. The ongoing COVID-19 pandemic, vaccination processes and areas of possible cooperation were also touched upon.

"The EU is Turkey’s number one import and export partner," von der Leyen stated, emphasizing the role of economic relations in bilateral ties. She stated that the EU will work on updating the customs union with Turkey by addressing challenges in its implementation. Michel, for his part, stated that the council invited the commission to start preparatory work in this regard.

Presidential Spokesperson Ibrahim Kalın, following the meeting said, Erdoğan conveyed to the EU leaders that Turkey’s final goal was full accession to the bloc. It was also reiterated that the EU must take concrete steps to support the positive agenda.

Regarding cooperation on migration, von der Leyen stated: "We will continue to support refugees and host communities." Von der Leyen added that the European Commission will soon make a proposal that reflects support for refugees in Turkey.

"The commission will soon make a proposal that reflects ... principles" including better opportunities for refugees and a Turkish commitment to prevent irregular departures, she said. "I am very much committed to ensuring the continuity of European funding."

Von der Leyen said respect for fundamental rights and rule of law are crucial and that she was deeply worried about Turkey's decision last month to withdraw from the Istanbul Convention, which aims to protect women from violence.

Turkey, on the other hand, said everybody must respect the country’s judicial processes. Erdoğan said violence against women is a global problem and that Turkey will continue to fight it decisively.

By strengthening judicial mechanisms around the existing laws, violence against women will be fought more effectively, the president added.

Turkey is hosting 6 million migrants, with nearly 4 million from Syria, its migration authority says. That is 2 million more than in 2016, a heavy burden on a country that only had 60,000 asylum-seekers in 2011 before Syria's civil war broke out.

The pact nearly collapsed last year when thousands of migrants, mostly Afghans, Pakistanis and Iraqis, amassed at the Turkish border with Greece after Ankara opened its borders for those heading to Europe, with the bloc fearing more refugees from Syria's Idlib.

"Our leading role in U.N. & our support to Amb. Bozkır will continue. Will make Istanbul U.N. hub," Çavuşoğlu added.

-Under his leadership UNGA works uninterrupted despite pandemic.

-Our leading role in UN&our support to Amb.Bozkir will continue.

Earlier on Tuesday, Bozkır visited Anıtkabir, the mausoleum of Mustafa Kemal Atatürk, the founder of the Republic of Turkey.

On Monday, Bozkır arrived in Ankara to start his official visit.

He is expected to meet with Erdoğan and Parliament Speaker Mustafa Şentop and later address the Turkish Parliament.

This Saturday, Bozkır is set to visit Turkey's southern province of Hatay, on the Syrian frontier, where he will see U.N. cross-border aid operations and inspect temporary shelter facilities.