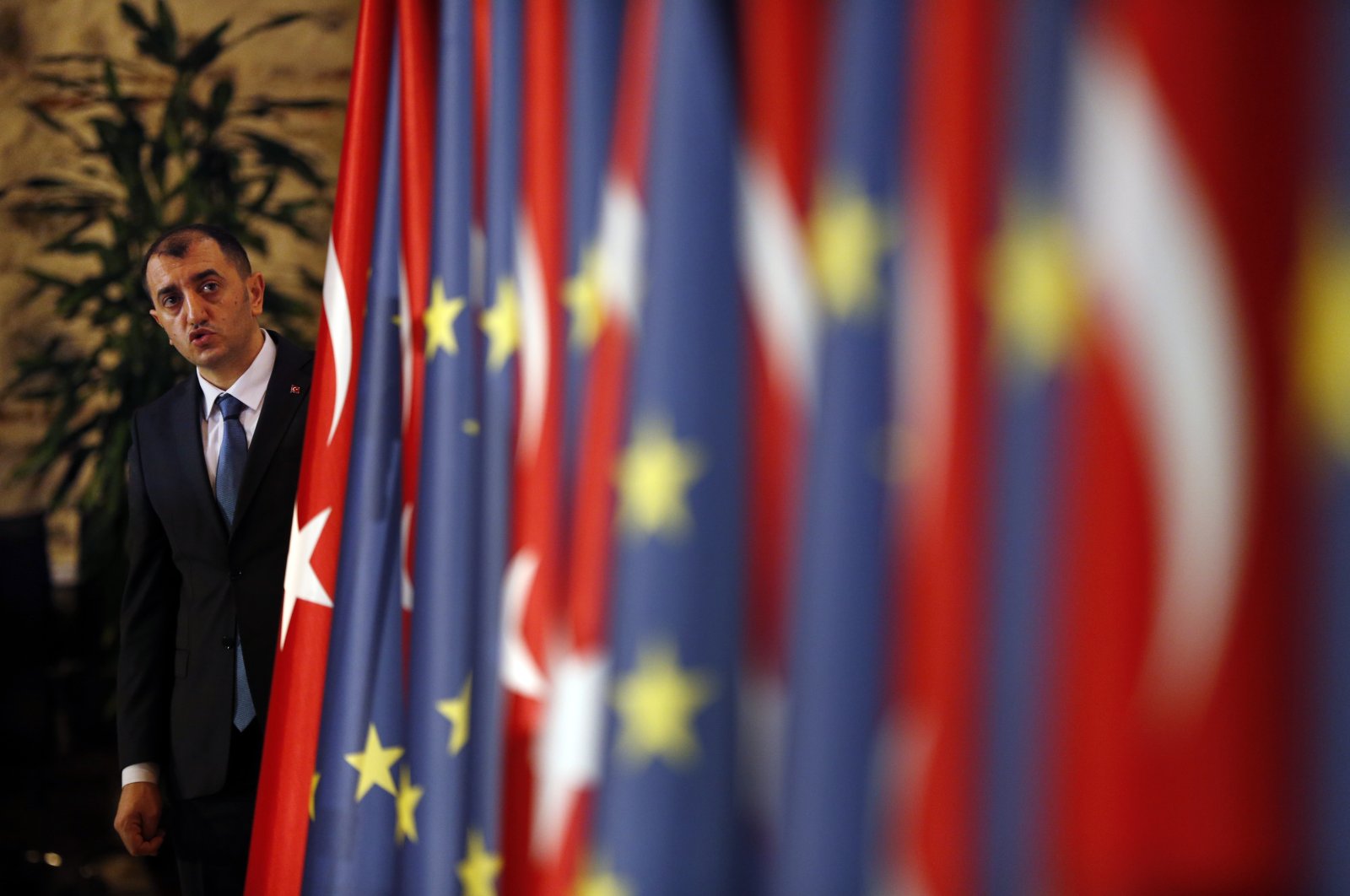 An official helps adjust the flags of Turkey and the European Union prior to the opening session of a high-level meeting the two sides, in Istanbul, Turkey, Thursday, Feb. 28, 2019. (AP File Photo)
by Anadolu Agency Apr 09, 2021 9:29 am
RECOMMENDED

Relations between Turkey and the EU can advance thanks to the positive momentum gained over the past few months, experts told an online panel Thursday.

An online webinar organized by the Circle Foundation discussed future relations between Turkey, a candidate for EU membership, and the bloc in light of the recent positive developments.

On the issue of terrorism, Kaymakcı said, the EU is only willing to cooperate in terms of terrorism against Daesh and that “it does not act accordingly” when it comes to the Gülenist Terror Group (FETÖ) and the PKK and its Syrian offshoot, the YPG.

Touching on an EU promise tied to a 2016 refugee deal between the sides, he said the bloc has yet to uphold its commitment to visa-free travel, noting the opportunities it would create.

Highlighting that Turkey currently hosts 4.2 million migrants, Kaymakcı said that the EU is only interested in migration management but it has not fully fulfilled its financial commitments to the Syrian people being hosted by Turkey.

The EU also failed to cooperate in northern Syria, criticizing Turkey’s operations in the region that helped displaced Syrians return home, according to Kaymakcı.

Praising the latest interaction between the EU and the Turkish government, Karnitschnig said Turkey’s EU membership talks are stalled, but “there is a current positive momentum.”

EU-Turkey relations have found new momentum with a new initiative to restart engagement after months of tension between the parties due to various issues, including Eastern Mediterranean oil and gas exploration rights and the Cyprus question.

Sweden’s former Turkey Ambassador Michael Sahlin, Visiting Professor at the College of Europe Dr. Emiliano Alessandri and Associate Professor Çiğdem Nas were the other panelists who attended the webinar.

The webinar is the first of three organized by the Circle Foundation, a nonprofit London-based NGO that works to create opportunities for the Turkish diaspora.