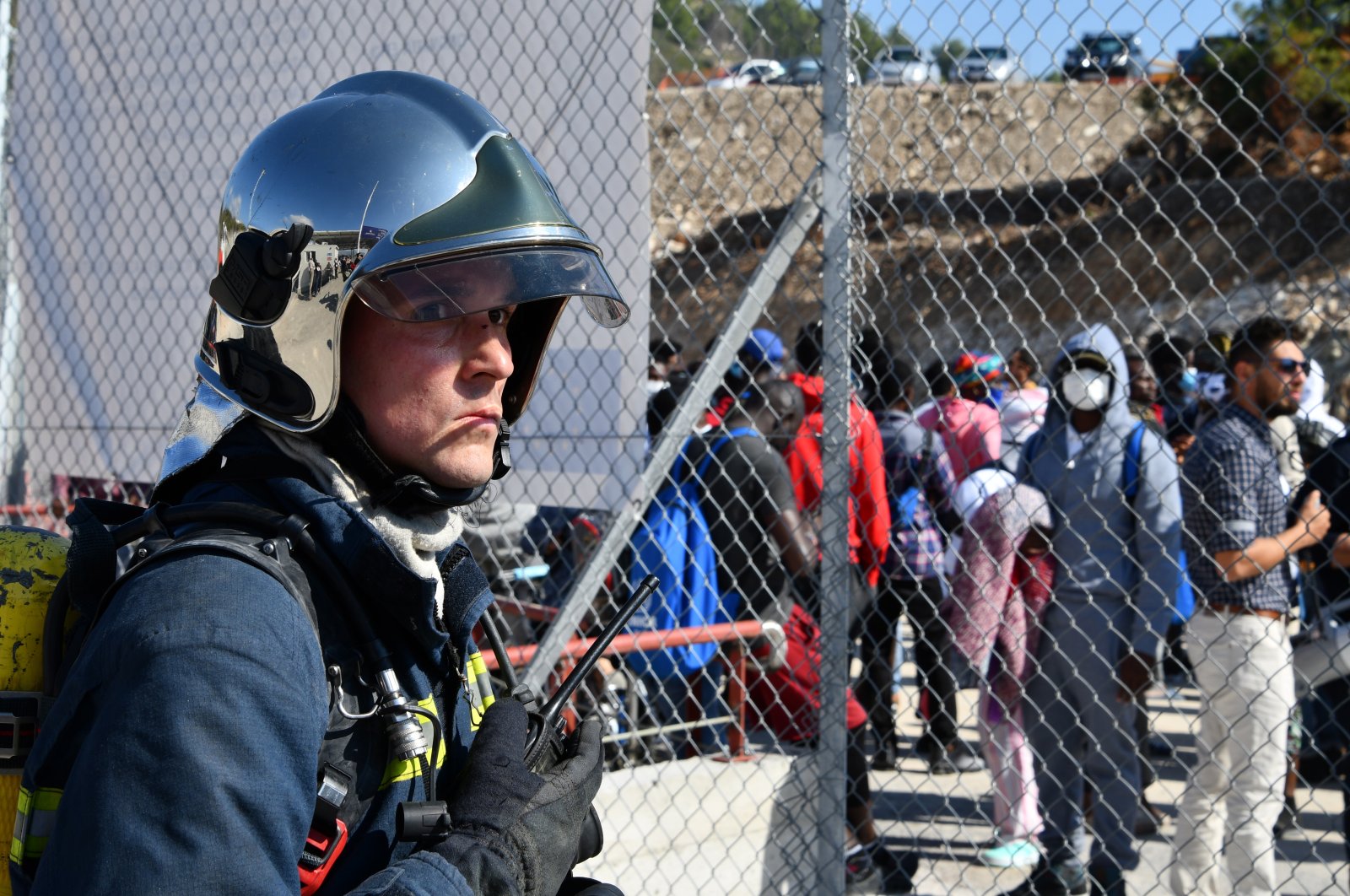 Evacuation of migrants at the closed camp for asylum-seekers in Samos island, Greece, Oct. 22, 2021, during the exercise "Promachos 2021" organized by the Greek Ministry of Migration and Asylum. (EPA File Photo)
by DAILY SABAH Nov 14, 2021 10:46 pm
RECOMMENDED

Women complain about discrimination for wearing hijab in Europe

A nongovernmental organization (NGO) criticized Greek Prime Minister Kyriakos Mitsotakis’ migrant policy and his indifference to the ongoing rights violations by illegal pushbacks off the island of Samos.

In a letter titled “Which Samos did you visit?” the Samos Open Platform, which consists of the island’s local and foreign residents, questioned Mitsotakis’ indifference, Anadolu Agency (AA) reported Sunday.

The letter came in response to Mitsotakis' recent stormy exchange with Dutch journalist Ingeborg Beugel, who accused him of lying about the issue, criticizing his policy on migrants and citing incidents of violent pushbacks by the country's coast guard.

Replying to what Mitsotakis claimed during the joint press conference with his Dutch counterpart Mark Rutte, the residents asked a series of questions pointing to the contradictions between what he said about the thousands of rescues of migrants by the Greek coast guard and the facts.

"Which Samos have you been to, Mr. Prime Minister?" the letter said.

"Because we live in Samos, we would like to inform you about two or three events from the countless ones that we know well, for which, although you gave the order to take place-in KYSEA of March 2020-you may not have happened to be in Samos so to see them happen."

The letter went to describe how in April 2020, a boat with migrants arrived on Mourtia Beach, an event that was witnessed by residents as well as journalists who took photos.

"A day later, the same migrants were found in the middle of the sea in inflatable rescue boats without an engine, sailing in danger towards Turkey," it said.

The same thing happened to migrants who arrived in the municipality of Kallithea asking for help.

"The same night, they were found in dinghies in danger in Turkish waters."

In April 2021, residents of the island confirmed the bullying and violent abduction of migrants who had just arrived at Psili Ammos Beach by hooded men from the security forces.

"Almost all the arrivals, instead of being transported to a safe place in order to apply for asylum, were seen in lifeboats without an engine in Turkish territorial waters" it said.

The letter continued by saying that journalists at the scene not only documented the incidents with photos but also confirmed all the complaints.

They included a complaint by a Palestinian woman who managed to arrive with her children at a reception and identification center where she was granted asylum and later shared her experience and filed a lawsuit with plenty of evidence.

In November 2021, a woman who was nine months pregnant was abducted by security forces after arriving on the island along with 24 other people

She was forced into an inflatable boat back to Turkey, where she gave birth after being rescued by the Turkish Coast Guard. The incident was confirmed by her partner and several witnesses.

"Someone placed a nine-month pregnant woman into an inflatable boat in the middle of the sea. Someone was ordered to do so and some are covering it up," the letter said.

Last week, Mitsotakis angrily defended Greece's controversial migration policy in a heated debate with a reporter who accused him of "narcissistic abuse" during a press conference with his Dutch counterpart in Athens. The reporter echoed the call of many rights groups and organizations urging Athens to stop lying and admit to the systematic policy of "cruel and barbarian pushbacks.

"There has been overwhelming evidence and you keep denying and lying. This is like narcissistic abuse. Why are you not honest? Why don't you say 'Brussels left us alone, we waited for six years, nobody did anything ... Now I have a say and yes, I do cruel, barbarian pushbacks.'"

In a report published in September, the European Union Agency for Fundamental Rights (FRA) revealed that the difficult conditions and violations of rights in detention and reception centers for migrants at EU borders continue. The report also noted that pushing migrants back to Turkey has become the de facto border policy of Greece, and that torture, ill-treatment and pushbacks continue.

Women complain about discrimination for wearing hijab in Europe