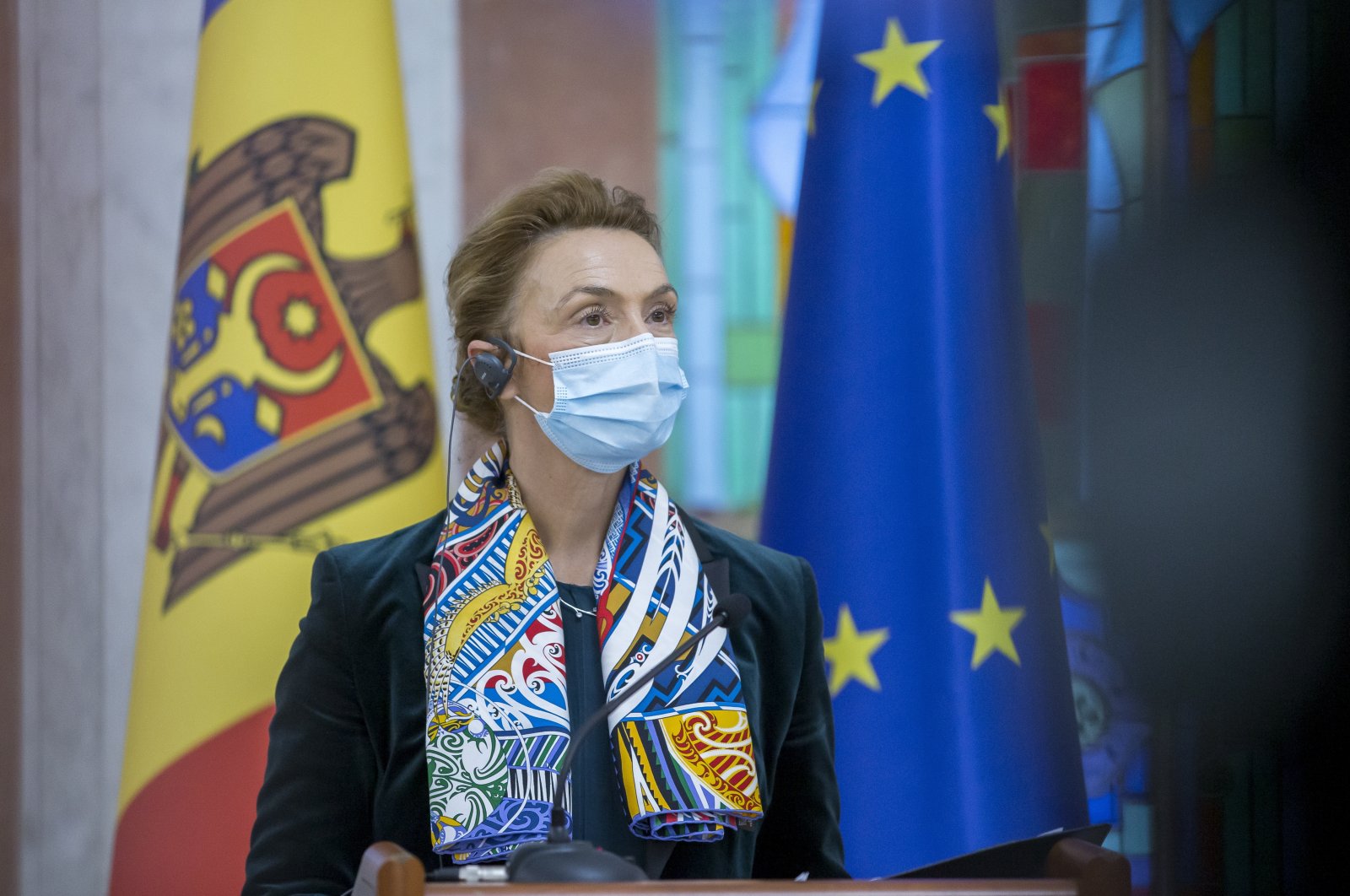 Marija Pejcinovic Buric, the secretary-general of the Council of Europe, speaks at a briefing with the President of Moldova Maia Sandu (not seen), during her official visit in Chisinau, Moldova, 22 November 2021. (EPA Photo)
by DAILY SABAH WITH AA Dec 06, 2021 10:39 am
RECOMMENDED

Tackling hate speech and ending discrimination remains an important objective, said Marija Pejcinovic Buric, secretary general of the Council of Europe, on Sunday in response to a letter by Turkey's Parliament Speaker Mustafa Şentop in which he denounced the backlash against an anti-Muslim discrimination project.

Buric said she has "no intention" of ending the council's campaign to promote women's diversity and their right to wear headscarves or hijabs, which came under immediate attack from France after its launch last month.

The council was forced to take down images of women in headscarves that were shared on the Twitter account of its Inclusion and Anti-Discrimination Division with the slogans "Freedom is in the headscarf," "Bring joy & accept hijabs," and "Beauty is in diversity as freedom is in the hijab."

In his letter, Şentop recently said the project was a "very valuable initiative" that could prove vital in "combating discrimination against women wearing the religious headdress."

In recent years, he pointed out, Muslim women wearing headscarves, particularly in Europe, have been "subjected to discrimination and unjustified practices which in some instances amount to hate crimes by either public administrations or private persons and institutions, triggered by Islamophobia and xenophobia."

He said it was unfortunate to see the campaign being "terminated due to the political considerations expressed by some politicians in France, the host State for the Council of Europe."

"In this context, it is shocking that this meaningful campaign for combating the discrimination faced by women wearing a religious headdress and tended to spread throughout Europe was terminated by the Council of Europe by taking into account the political considerations of a member State," Şentop wrote.

He said pulling the campaign "means that excluding female members of the Muslim minority living in Europe from social life and exposing them to discrimination due to their adherence to the requirements of their religion have been approved by the Council of Europe."

"The fact that the Council of Europe places the political concerns of politicians of the Member States above its own fundamental values has taken its place as a shameful event in the history of the institution, which has achieved great success in the protection of human rights in its 70-year history," read the letter.

"Furthermore, the fact that the concerns forming the basis of this decision have stemmed from public officials and politicians in France raises some serious questions about whether the aforementioned state is a suitable host in order for the Council of Europe to function independently, impartially and professionally."

Last month, Şentop criticized France for its hypocrisy after Paris prevented the campaign launched by the Council of Europe to fight anti-Muslim hate speech.

Speaking at the 143rd Assembly of the Inter-Parliamentary Union (IPU) in Spain, Şentop criticized France for vetoing the campaign launched by the Council of Europe against anti-Muslim hate speech.

"We have to expose this hypocrisy," Şentop said, pointing out that France opposed the campaign despite having a significant domestic Muslim population.

"Turkey will always stand by all the oppressed, aggrieved communities and people, whether or not they're Muslim," he added.

Anti-Muslim hatred has significantly increased in Europe in recent years. Far-right extremism and xenophobia have fueled Islamophobia in Western countries, where terrorist attacks by Daesh and al-Qaida as well as a migrant crisis are used as excuses to legitimize those views. France, home to the largest Muslim minority in Europe, estimated at 5 million or more out of a population of 67 million, is at the helm of Islamophobic efforts to silence members of the minority group. Critics denounced French President Emmanuel Macron for trying to galvanize far-right citizens to vote for him in the 2022 April presidential elections.

Macron's anti-Muslim rhetoric sparked a wave of anti-Muslim feelings among far-right groups. The number of Islamophobic incidents in France rose sharply last year. According to the National Observatory of Islamophobia, there were 235 attacks on Muslims in France in 2020, up from 154 the previous year, a 53% jump. Most of the attacks took place in the Ile-de-France (Greater Paris), Rhones-Alpes and Paca regions of the country. Attacks on mosques jumped 35% in the same year. A global coalition of 25 nongovernmental organizations (NGOs) asked the European Commission to investigate France for its state-sponsored support of Islamophobia.