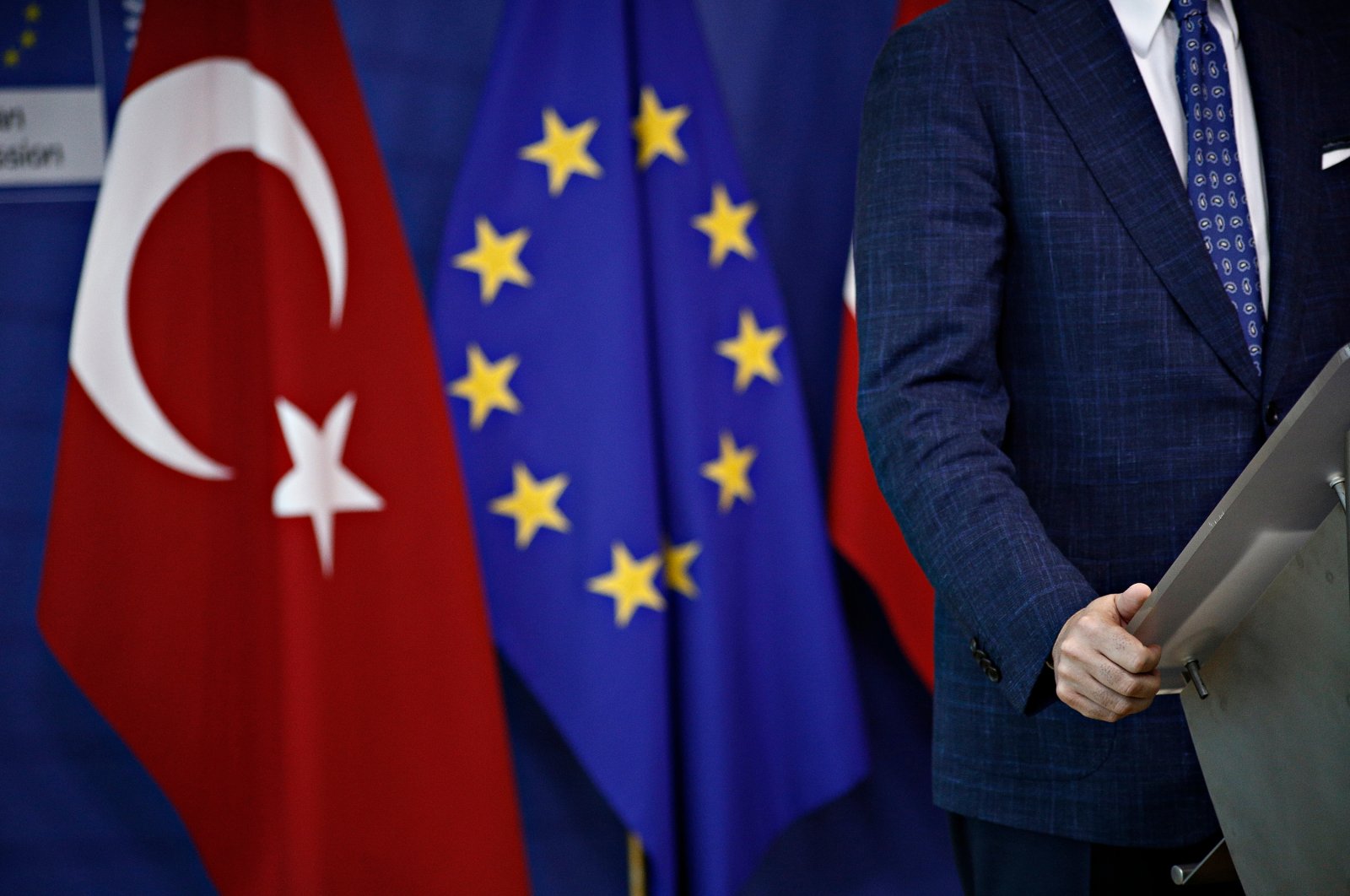 A man stands next to flags of the European Union and Turkey at the headquarters of the European Commission in Brussels, Belgium, July 25, 2017. (Shutterstock File Photo)
by Anadolu Agency Dec 21, 2021 8:11 am
RECOMMENDED

Turkish Deputy Foreign Minister Faruk Kaymakcı called on the European Union to advance the country's bid to join the bloc.

"Turkey's EU accession perspective should be protected and strengthened," Kaymakcı said in an interview with the Brussels-based Diplomatic World magazine published Monday.

There is no need to "look for new ideas" to proceed with the country's EU accession, he added.

"We already have the structure: the March 18 (2016 migrant agreement) Statement with all six dimensions," he said, listing the accession negotiations as the firm dimension.

Saying that "the more Turkey believes that it will become a member of the EU, the faster the reforms will happen in Turkey and the better Turkey-EU relations will be," he stressed that if "Turkey feels being discriminated among candidate countries, or pushed away from the rest of Europe, then we will have less and less trust towards each other, and this is not helpful."

The accession process must be revitalized without any prejudgment, he emphasized.

He expressed Turkey's willingness to "hold all these high-level dialogue meetings, both the new and old ones, but also to revitalize already established mechanisms between Turkey and the EU such as the Association Council meetings and Political Directors' meetings."

"Turkey should also be invited to all meetings that candidate countries are regularly invited (to) such as Gymnich meetings and others," Kaymakcı added.

As for the third dimension, Kaymakcı said the customs union between Turkey and the EU must be updated in order for there to be a positive agenda.

"Turkey already implements the EU's trade and competition policy in line with the Turkey-EU Customs Union. Turkey, in terms of trade, economy and competition, can be already considered a member of the EU. No other candidate country has a Customs Union (CU) with the EU," he said.

Stressing that the current customs union needs to be updated, he said the new version can include "services, agriculture, energy and maybe other areas." He stated that Turkey and the EU's economies are highly interlinked and interdependent, underlining that the modernization of the customs union would "create a win-win situation for both sides."

"The EU and Turkey have agreed that when Turkey fulfills 72 benchmarks on visa liberalization dialogue, Turkish citizens should be able to travel freely – we are not talking here about the free movement of labor within the Schengen Zone. We are working on fulfilling the remaining few benchmarks," he said.

Furthermore, "counterterrorism is another important dimension, as there is a mistrust issue between Turkey and some of the Western countries," he stressed.

"When we see terrorist organizations like the PKK acting in European capitals, making propaganda, recruiting people, practicing money laundering or getting involved in the narco-business, we are worried for all of us and our common future," Kaymakcı noted.

He stressed that good cooperation in the fight against terrorism is needed against "all sorts of terrorist organizations" including the PKK, al-Qaida, Daesh and the Gülenist Terror Group (FETÖ).

FETÖ and its United States-based leader Fetullah Gülen orchestrated the defeated coup of July 15, 2016 which left 251 people dead and 2,734 injured.

Kaymakcı listed the migration management issue as the final dimension to Turkey-EU relations as he reminded of the "major challenge of irregular migration."

Saying that Turkey currently hosts "4.2 million people, the largest refugee community in the world, of which 3.7 million are Syrians and the rest are Asians, mostly from Afghanistan, Bangladesh, Iran, Iraq, Sri Lanka and Africans," he continued: "This is a very heavy burden that we cannot assume alone and we expect the EU side to share this."

"We had some sort of a deal with the EU related to migration. Within the framework of the deal, we gave two promises; preventing illegal crossings and taking back illegally crossed people from the Greek islands. We kept our promises by taking all the people returned by Greece until February 2020 and by preventing more than 2 million additional refugees that could have otherwise gone to other European countries beyond Turkey," he added.

Noting how the "migration burden has so far cost Turkey more than 40 billion euros ($45 billion)," Kaymakcı said: "We are talking about only 6 billion euros of EU support for Syrians in Turkey, and out of this 6 billion euros, only 4.2 billion euros has been spent as of today. The flow of the funds is very slow, very bureaucratic, even though it is the fastest mechanism in the EU system."

He stressed that a new migration deal is needed, adding: "Due to the (coronavirus) pandemic, millions of refugees are also expected to head towards Turkey and the rest of Europe. We have to manage this better. Our new migration deal has to focus on dealing especially with the situation in northern Syria, which is also the fourth promise of the EU."

Asked about the link between sports and diplomacy, Kaymakcı said sports are "vitally important" in Turkey-EU relations, adding "some Turks do not realize how European they are until their favorite team plays in the European Championships."

"Turkish teams playing in the European leagues in different branches also constitute important components of our European identity and belonging to Europe," he said.

"To conclude, sports and diplomacy fit together. And I think sports diplomacy is quite influential and it really helps a lot in terms of overcoming prejudices, connecting peoples and nations, and creating a healthy and stable environment," he added.