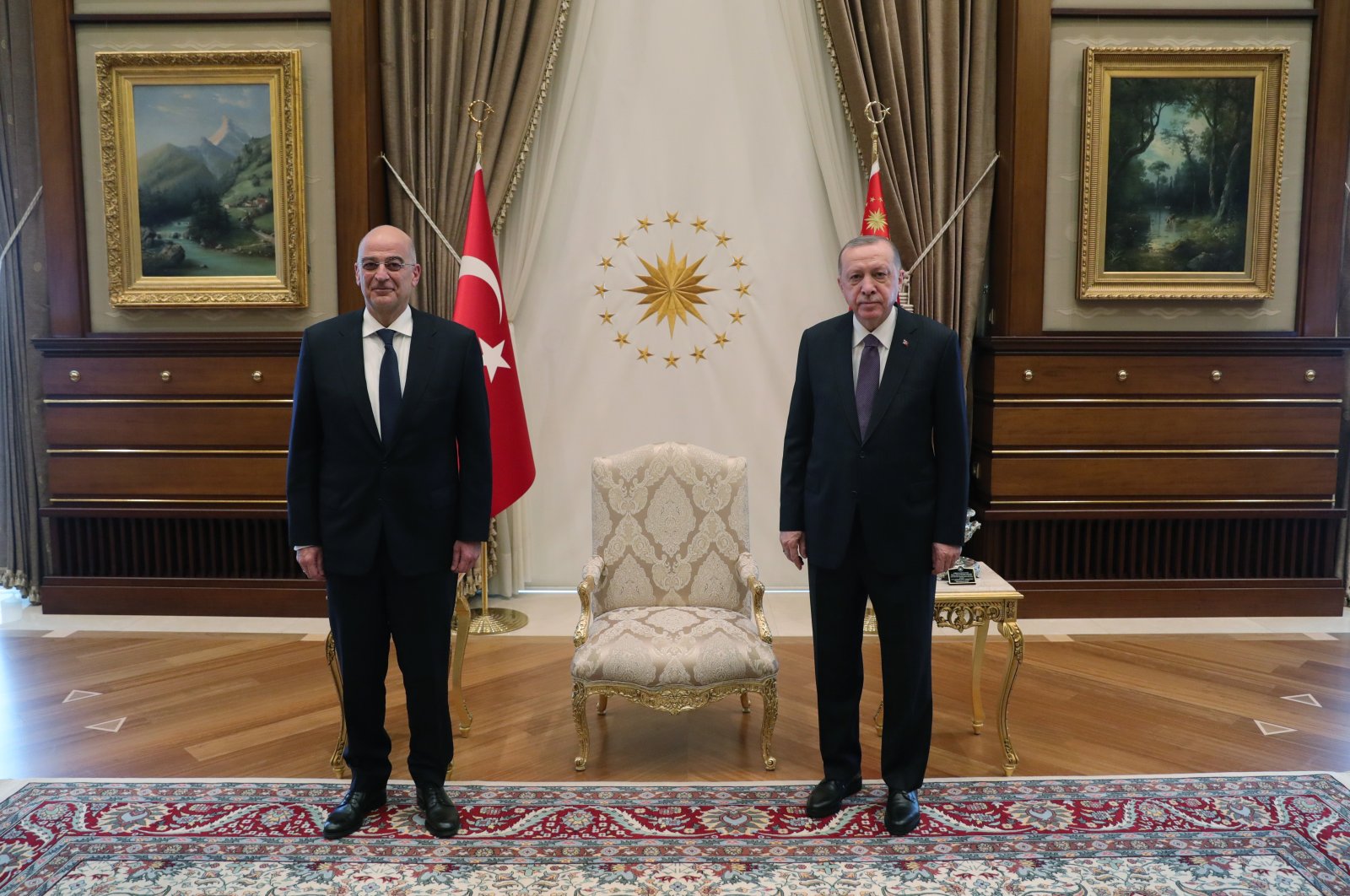 A handout photo made available by the Turkish Presidential Press Office shows President Recep Tayyip Erdoğan (R) and Greek Foreign Minister Nikos Dendias posing for a photograph before their meeting in Ankara, Turkey, April 15, 2021. (Courtesy of the Presidency)
by Daily Sabah Apr 15, 2021 1:10 pm

As Ankara and Athens seek a way forward, both countries' foreign ministers are expected to discuss a range of disagreements including the Eastern Mediterranean, Aegean, migration, as well as the Cyprus issue

Greek Foreign Minister Nikos Dendias was received by President Recep Tayyip Erdoğan in the capital Ankara Thursday as both countries seek a path toward dialogue following a tumultuous year marred by conflicts over the Eastern Mediterranean.

Following the meeting with Erdoğan, Dendias and Foreign Minister Mevlüt Çavuşoğlu are expected to discuss a series of disagreements that have been plaguing the bilateral relations between the two countries.

Yet, recently, the two NATO allies have adopted a more conciliatory tone and have been seeking dialogue.

Turkish and Greek diplomats have since met in Istanbul and Athens, resuming a series of meetings designed to build trust between the historic regional rivals. The exploratory talks came after a five-year hiatus.

Turkey has also been irked by Greece’s militarization of islands close to the Turkish mainland.

“We are prepared to discuss all of our issues with Greece,” Çavuşoğlu told NTV television on Thursday. “Of course, it is not possible to resolve all of the issues in one meeting – or in multiple meetings – but at least a positive atmosphere (is being) created and we can work out the ways in which we can resolve the existing problems.”

“There are issues on which we disagree with Greece. We have to discuss these in an open and honest manner,” he added.

On Wednesday, Greece said it had agreed with Libya to hold talks on marking out their maritime zones in the Mediterranean, after a meeting with the president of the Libyan Presidential Council, Mohamed Menfi.

Asked about the development, Çavuşoğlu said Libya could hold talks on maritime demarcation with any country, adding this was not a risk to the accord between Ankara and Tripoli.

Turkey and Greece have also traded accusations over unauthorized migration. The Turkish coast guard, as well as numerous refugee rights organizations and aid groups, have accused the Greek coast guard of conducting pushbacks – illegal summary deportations – by returning their boats to Turkey without allowing them to apply for asylum in Greece.

Greece, for its part, denies it carries out pushbacks and accuses Turkey of failing to crack down on migrant smugglers operating from its shores.

The dispute with Athens also strained Ankara’s relations with the European Union as a whole.

Turkish officials have also said that they hope for progress in 2021 and expect the bloc to take definitive action to this end. Most recently, the EU in January decided to hold off on potentially sanctioning Turkey thanks to positive developments made during a meeting with the bloc's foreign ministers.