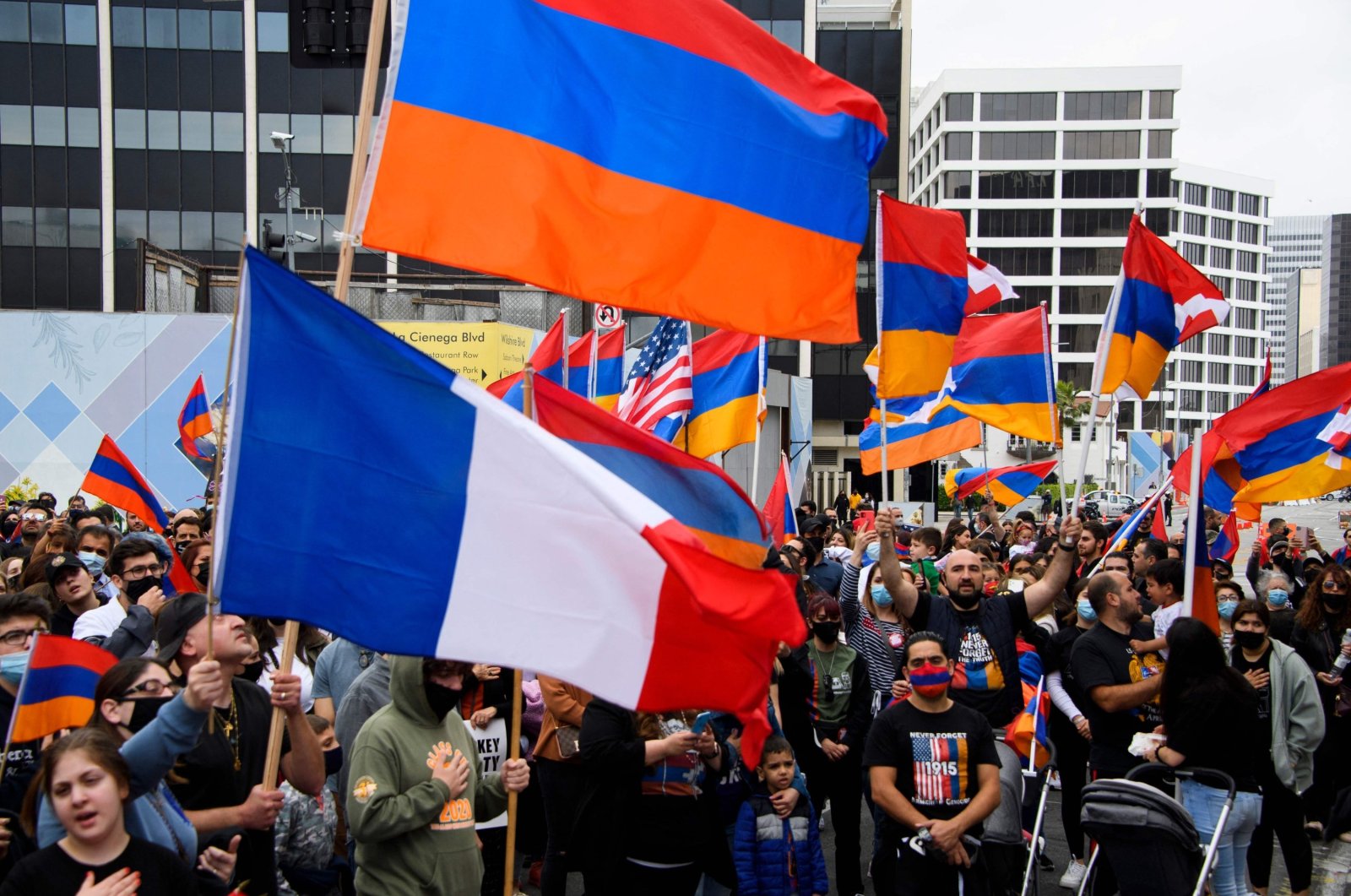 A French flag is waved alongside Armenian flags as people protest outside of the Turkish Consulate on the anniversary of the 1915 events in a demonstration organized by the Armenian Youth Federation (AYF) in Beverly Hills, California, U.S., April 24, 2021. (AFP File Photo)
by Anadolu Agency Jun 17, 2021 10:11 pm
RECOMMENDED

A Turkish-French high school student was questioned and threatened by French intelligence officers about his Muslim identity and for alleged extremism, after he objected to his teacher's claims about the 1915 events, which France recognizes as a so-called "Armenian genocide."

The student, identified as Altay faced intimidation, threats of jail time and attempts to associate him with extremism because he did not accept his teacher's assertions in history class on June 2, even though it is not a crime under French law to object to the Armenian claims.

Altay and his family, who did not share their last name over concerns for their safety, recounted the events to Anadolu Agency (AA), saying that his teacher had devoted half of the two-hour class to the Armenian claims, continually saying that Turks "killed Armenians" and civilians.

"I couldn't stand it. I endured for 40 minutes and then calmly asked the question: 'Is there evidence?' Then, the teacher suddenly got angry and said: 'How can you say this? How can you object to this?'" said Altay.

He added that his teacher said he could go to prison for a year for his words allegedly denying the "so-called" Armenian genocide, with the school administrators calling his father to discuss what happened.

After doing some research, he found out that none of his comments constituted a crime in France and that the European Court of Human Rights (ECtHR) did not oblige defining the 1915 events as a "genocide."

After the incident, Altay was called a week later by intelligence forces to answer questions.

He said he was treated kindly, but that despite being told that he had not done anything illegal, they took the usernames and passwords of his social media accounts and asked questions about his religious beliefs and practices.

As a student undergoing exams at the time, Altay emphasized that he had been under a great deal of stress. He was seriously worried about his future and was unable to concentrate on schoolwork.

Restrictions on freedom of speech

Altay's Father Aydin said that during his meeting with the principal of his son's school, he had been told that the teenager was "facing a very bad incident," and that he could be fined or jailed.

The school administrators "exaggerated the incident" during the meeting, he said. In response, Aydin underlined that in France, "people have freedom of speech" and objected to them restricting his son's freedom of expression.

"If he committed such a major crime, why don't you give disciplinary punishment?" Aydin said he told the principal, who said that was not possible.

"I said: 'But you convey everything to the high authorities, why don't you punish him? If he's guilty, then you need to punish him.' Then they were silent. They didn't say anything."

"Since that day, I've been in a little bit of depression. Since I was very worried, they gave me leave from work. My son's mental state also deteriorated. No one came to our support in this matter in France, only my colleagues at work supported me, nobody else ... No one from the French administration called me."

Altay's mother Aysel also expressed that the incident has left her very worried about her son's future.

Turkey objects to the presentation of the events of 1915 as “genocide,” calling them a tragedy in which both Turks and Armenians suffered casualties in the heat of World War I.

In 2014, President Recep Tayyip Erdogan – Turkey's then-prime minister – expressed his condolences to the descendants of Armenians who lost their lives in the events of 1915.