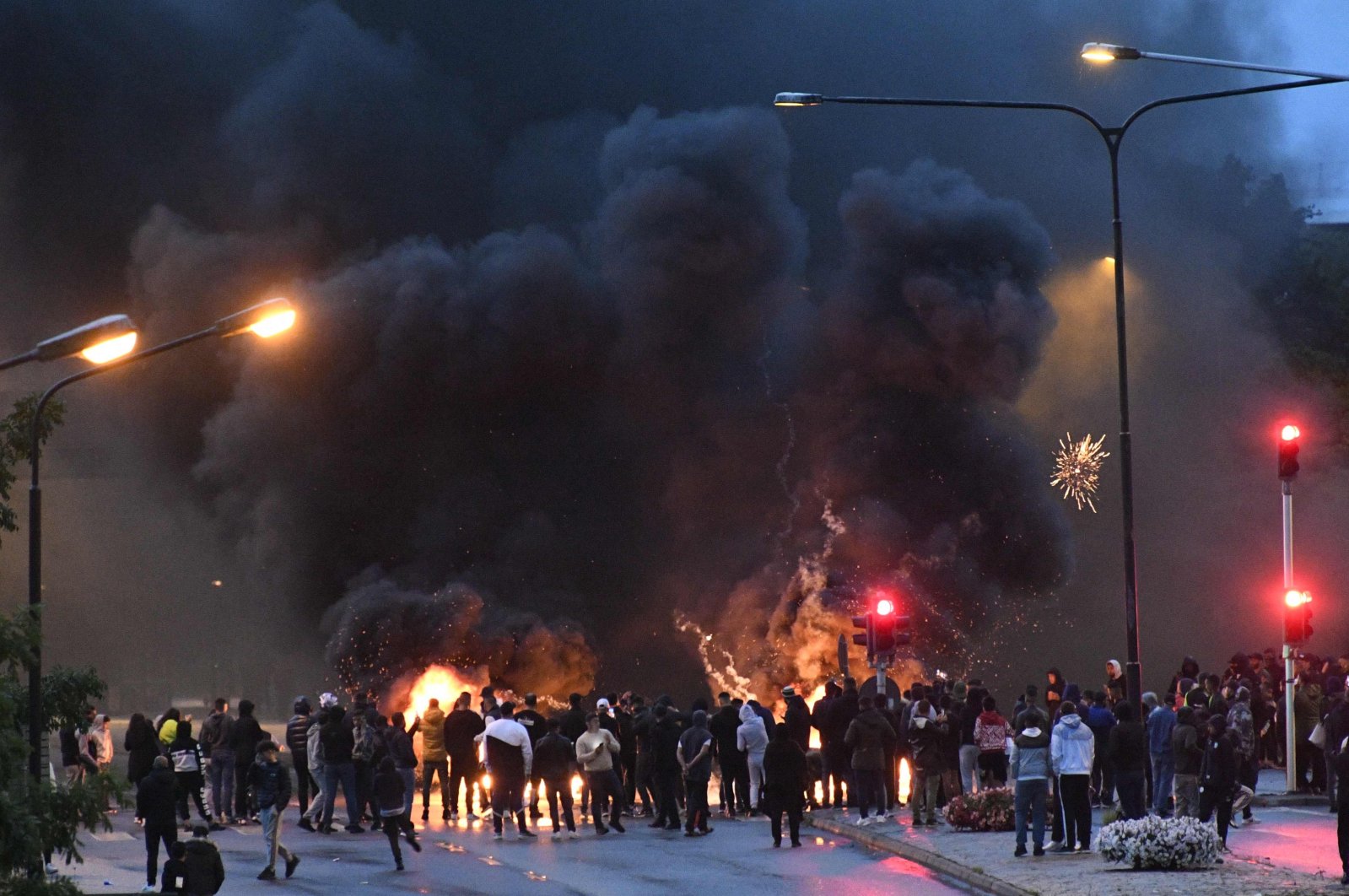 Smoke billows from burning tyres, pallets and fireworks as a few hundred protesters riot, which was sparked by the burning of a Quran, in the Rosengard neighborhood of Malmo, Sweden, Aug. 28, 2020. (AFP)
by DAILY SABAH WITH AA Sep 13, 2020 1:23 pm
RECOMMENDED

The International Union for Muslim Scholars (IUMS) has condemned the burning of a copy of the holy Quran in Sweden yesterday.

In a statement, the Doha-based union lamented violations against Muslims and their holy sites and books in a number of European and Asian countries.

“We did not hear any condemnation of these acts from groups that claim to defend freedom and respect symbols, religions and holy sites, and neither have we seen action from countries against those who carry out these heinous and aggressive acts,” the union said.

The IUMS called on European countries to take measures to “prevent these provocations and violations” and to “prohibit racism and hatred against Islam or any other religion.”

Despite Swedish police refusing to grant them permission, the far-right group went ahead and burned the Muslim holy book anyway, broadcasting the act on social media outlets. In the video, racist party members are seen pouring gasoline on the Quran, then setting it on fire in the Rinkeby neighborhood.

As anti-Muslim violence rises across the country, Swedish police this week took restrictive measures in front of a Stockholm mosque operated by Turkey’s Religious Affairs Directorate (Diyanet) to allow communal Friday prayers to be conducted without provocations. The mayor of Botkyrka Municipality, Ebba Östlin, together with Municipal Police Commander Martin Lazar, also visited the mosque to show solidarity with the city’s Muslim community. In a speech during the visit, Östlin condemned the provocative actions committed by the far-right, vowing they would not allow repeat performances. The head of the mosque, İsmail Okur, expressed gratitude to both for their support.

This has not been the first time the Quran was burnt or publically desecrated by racist extremists in Europe.

The leader of Hard Line, Rasmus Paludan, burned a copy of the Quran in Malmo last month. A riot then broke out in the city, where at least 300 people had gathered to protest against anti-Islam activities. Daily Aftonbladet said several anti-Islam activities had taken place in Malmo, including three men kicking a copy of the Quran around a public square. An anti-Muslim rally was also held by the far-right group Stop Islamization of Norway (SIAN) near the Norwegian parliament in August. A scuffle took place after a female protester held up a copy of the Muslim holy book and ripped out its pages.