Israel 'alone is responsible' for tragedy in Palestine: Çavuşoğlu 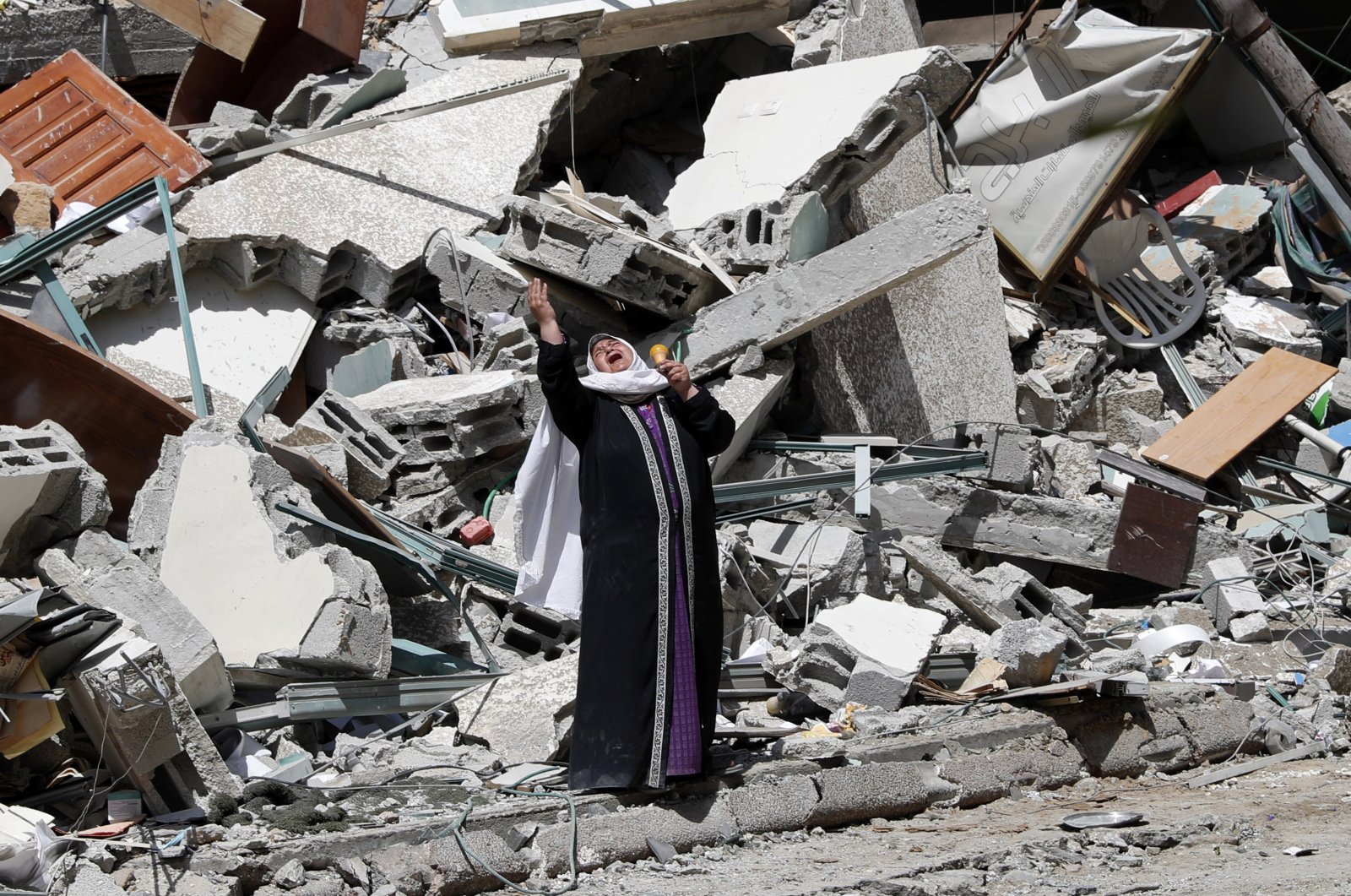 A woman reacts while standing near the rubble of a building that was destroyed by an Israeli airstrike in the Gaza Strip, Palestine, May 16, 2021. (AP Photo)
by DAILY SABAH May 20, 2021 5:30 pm
RECOMMENDED

Turkey will not remain silent in the face of unspeakable atrocities and brutality, Turkish Foreign Minister Çavuşoğlu said Thursday amid Israel's ongoing attacks on Gaza Strip, stressing that Tel Aviv is solely responsible for the violence.

"A tragedy has been taking place in Palestine for many years. A heart-breaking tragedy is continuing before our eyes," Çavuşoğlu told the United Nations General Assembly's special session on the situation in Palestine and Israel.

"Through repetition, the perpetrators of this tragedy want us to become insensitive to these outrageous crimes, the oppression of the Palestinian people, and violations of their basic human rights and freedoms," he added.

Health centers, media offices and residential neighborhoods have been targeted. Such acts of aggression amount to war crimes, the foreign minister stressed.

"We have to assign the blame where it belongs: Israel alone is responsible for what is happening today in Jerusalem, West Bank and Gaza," Çavuşoğlu said.

Israel’s continuing blockade of Gaza has effectively turned it into the "largest open-air prison in the world," he added.

The tensions that started in East Jerusalem during the Muslim holy month of Ramadan spread to Gaza due to Israeli assaults on worshippers in the Al-Aqsa Mosque complex and the neighborhood of Sheikh Jarrah.

What needs to be done now, according to the minister, "is not only help establish a cease-fire but also mobilize international efforts to end Israel’s occupation and blockade over Palestinian territories."

Çavuşoğlu also stressed that it is unfortunate and disturbing that "the U.N. Security Council once again failed to deliver."

"At a time when the world needed to protect international peace and security the most, the position of the Council has once again been that of inaction and dysfunction," he added.

"It is time for the international community to come up with effective legal and moral means to stop Israel’s attacks on Palestinians."

Ensuring Israel’s accountability for the "crimes it committed" is vital to prevent the reoccurrence of such acts of aggression, the foreign minister further said.

In order to achieve peaceful coexistence between Palestinians and Israelis, Çavuşoğlu said the peace process and the two-state vision should be revitalized.

Also addressing the session, the president of the 75th session of the U.N. General Assembly, Volkan Bozkir said Israel's attacks were "inhumane and simply unbearable."

The eviction of Palestinians from their homes in Sheikh Jarrah and East Jerusalem "could constitute war crime," Bozkir stressed.

He called on Israel and Palestine to swiftly "return to negotiations with a goal of ending the occupation."

For his part, the U.N. Secretary-General Antonio Guterres said he was "deeply shocked" by the continued air and artillery bombardment by Israeli Defense Forces (IDF) in Gaza Strip and called for an immediate cease-fire between Israel and Palestinian resistance group Hamas.

"If there is hell on earth, it is the lives of children in Gaza," Guterres said, noting that he and the U.N. Mideast envoy are engaged in “extensive diplomatic efforts” in the region, including with Egypt, Jordan and Qatar, to stop the conflict.

Guterres called on all members of the international community “to do everything in their power to enable the parties to step back from the brink.”

The top Palestinian diplomat accused Israel of committing a “genocide” against Palestinian families and urging the international community to protect the Palestinian people until their freedom is assured.

Foreign Minister Riad Malki said that “every country in the world has a responsibility to ensure that peace, justice and freedom prevail.”

He urged the assembly to ensure that Israel is held accountable for killing innocent Palestinians and is not provided with arms.