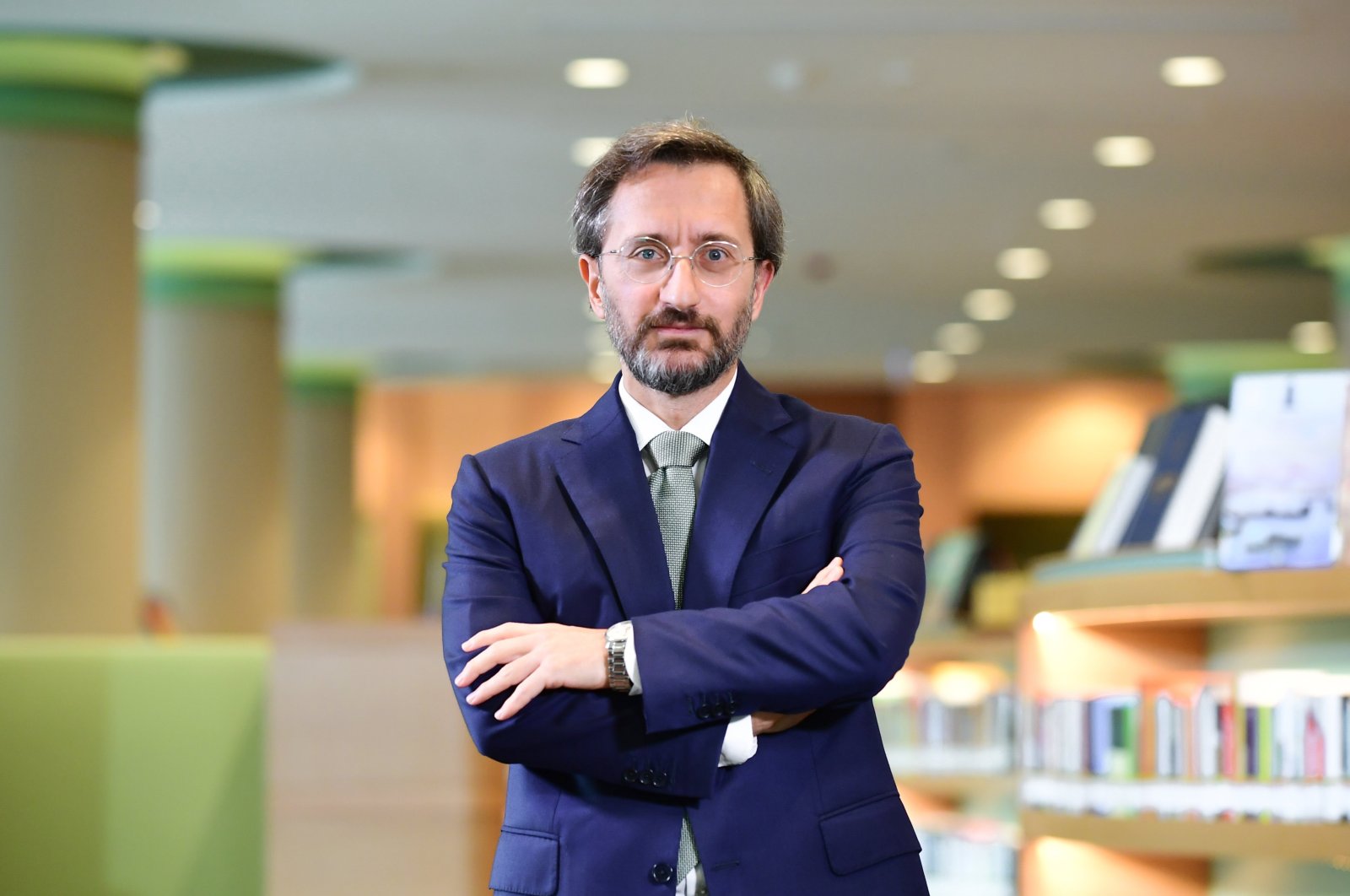 The reforms of the legal system, democracy, freedoms and the economy aim for a more prosperous and democratic Turkey, Presidential Communications Director Fahrettin Altun said Monday.

Speaking to Daily Sabah in an exclusive interview, Altun elaborated on Turkey's new set of reforms while stressing that the new period is actually a continuation of the country’s rise in all fields over the last 18 years.

Turkey is entering a new period in terms of its economy, judiciary and social fields of which President Recep Tayyip Erdoğan gave the first clues on Nov. 11 during his speech at Parliament. Among these are reforms and regulations related to Turkey’s investment climate and legislation backed by an efficient judicial system, and the strategy would be based on stability, lower inflation and international investment. The new period of reform will also address the significant fields of human rights and the judicial system. As the president underlined, the country is expected to establish a balance in which freedoms and security complement one another.

During this period, Turkey will simultaneously finalize its Human Rights Action Plan while strengthening the foundation of the public power that protects freedoms.

"We have been going through a very valuable 18-year period in which our president's political movement and cadres achieved significant success. Significant steps were taken for Turkey to be more active in the region and international arena, ... for Turkey’s democratization and the promotion of the people's welfare. These achievements naturally raised the standards in Turkey as well as expectations. Being aware of this, our president is constantly working to set a higher standard for democracy, welfare and national security," he stated.

Altun said that Turkey gained vital victories in steps toward democratization, EU reforms and constitutional amendments while the target is still to carry the country to a future of prosperity, freedom and security.

"We see democracy as a continuing process. This process will never end. When new developments pose new threats to our freedoms, we try to make new reforms and build a system that will protect them," Altun said, summarizing the spirit of the new reform phase.

Emphasizing the fact that freedom and security are not contradictory notions for Turkey, he said: "We have never seen these notions as a dilemma but principles that complement each other. Terrorism targets not only our lives but also our freedoms.”

“Depriving people of their freedoms for the sake of the state’s security neither provides safety nor does it prove sustainable,” he continued, saying that Turkey, therefore, puts great emphasis on judicial reform.

“We know that the target of terrorism is not just our lives but also our freedoms. Part of the nation’s security is the freedom of the people and the rule of law,” Altun said.

“In the past few years, Turkey has fought three dangerous, brutal and insidious terrorist organizations,” Altun stated, adding that Turkey in this regard conducted military operations to secure its land borders while it also took action to preserve its maritime borders, referred to as the Blue Homeland.

“We saw the rehearsal of the totalitarian regime that the PKK tried to establish in Syria, representing imperialist powers and bearing a Marxist-Leninist character. Similarly, the brutal and savage structure that Daesh tried to create is known by everybody. We also know that the Gülenist Terror Group (FETÖ) would have turned Turkey into an autocratic junta regime if the July 15 coup attempt would have been successful,” he added.

Turkey has also been the leading country in humanitarian aid and hosts millions of refugees, Altun pointed out.

It also hosts the highest number of refugees in the world at nearly 4 million, according to official figures. The number of Syrians living in Turkey was 3.6 million as of May.

Saying that Turkey put into practice its most liberal policies during the period of the ruling Justice and Development Party (AK Party), Altun said: “It was governments led by Erdoğan that abolished disgraceful crimes such as torture or returned the assets of religious minorities as well as of foundations after years. Progressivist steps in the fight against discrimination and on women's rights were also part of these proud achievements.”

Altun also pointed out that there has been a smear campaign against Turkey taking place in some countries’ mainstream media in recent years. “This unusual situation should be read as a joint result of several intersecting developments. First of all, the post-truth era, also called post-truth, is a period in which disinformation and information pollution play an active role and perceptions override facts. During this period, we are aware of their impact on Turkey, and we continue to fight these lies and false news articles,” he added.

Underlining that this fake news and disinformation is defeated by time, Altun reminded that there was news that Turkey allegedly engaged in genocide in Syria in 2019, while this empty accusation is not even remembered today.

Another reason for these smear campaigns was the fact that some countries’ comfort zones were disrupted by Turkey’s active foreign policy, the communications director highlighted, saying that these countries fueled anti-Turkey rhetoric through various lobbies.

Saying that Turkey “delicately tried to preserve the people’s safety through the principles of justice and democracy” following the July 15, 2016, coup attempt, Altun said that Ankara simultaneously fought the PKK and Daesh terrorist organizations which similarly engaged in dark propaganda.

Speaking on current reforms to the economy, Altun said Turkey is keen to consider opportunities in the post-COVID-19 era. “The Turkish economy did not undergo a major crisis because the right decisions and steps were taken in a period when the world was experiencing difficulties during the pandemic. In the next period, we are preparing for economic opportunities in the world after COVID-19 by taking the necessary measures. We are preparing to implement structural reforms, taking into account the geoeconomic mobility in the world,” he said.

Altun said Turkey is at the center of several economic movements ranging from trade routes to energy lines at a time when geoeconomics has gained significance.

The communications director stressed that Turkey aims to raise the living standards and prosperity of its people in this period, though some hard decisions might have to be taken.

“The fight against inflation will be an important means in this process. Besides this, increasing foreign trade exports are among our most vital targets,” Altun stated, indicating that Turkey took the necessary steps to make attractive investments at a time when supply chains are reshaping. As a result of this, export figures are expected to increase in the upcoming period, he continued.

Altun stated that this is also important for employment, reminding that Turkey has a young and dynamic population.

“We will continue structural reforms. The central bank will continue to give the necessary confidence to the money market in this period while a more balanced and rational monetary policy is expected in which investors are not overwhelmed by interest, as the president said,” Altun said.

He also stated that steps taken in the field of energy, especially energy exploration in the Black Sea, will unburden the budget and foreign trade volume.

As part of the new period, Turkey has also been sending messages of reviving alliances in the past few weeks.

Erdoğan said Saturday that Turkey sees itself in Europe and seeks to build its future on the continent.

During an online speech for the AK Party congresses in several provinces, the president noted that Turkey wants to enhance its cooperation with its allies, saying that Ankara has no problems with any country which cannot be solved through dialogue and diplomacy.

“The EU has to overcome its stalemate on Turkey in the light of long-term common interests and without any discrimination. The next big move for the EU economy, politics and foreign policies would be Turkey’s full membership in the bloc,” Altun underlined, saying that the president has placed emphasis on the EU process since the beginning.

He noted that significant developments regarding the EU have taken place since 2002, when the AK Party came to power, while the most important reform packages were accepted in this period.

Turkey is one of the countries with the longest history with the union, including the longest process of negotiations. The country signed an association agreement with the EU in 1964, which is usually regarded as a first step to eventually becoming a candidate. Applying for official candidacy in 1987, Turkey had to wait until 1999 to be granted the status of a candidate country. Turkey has been reportedly preparing a new initiative to accelerate the accession process to the EU. Accordingly, Turkey will complete regulations for six more chapters, including the fight against terrorism.

Yet, despite its efforts, Turkey's accession process has turned into a deadlock, with multiple disappointing actions from the EU, especially when it comes to respecting Ankara's national security concerns.

“Following internal rifts within Europe, the U.K.’s departure from the bloc, EU constitution discussions, increasing xenophobia and far-right movements, the accession process was disrupted, creating disappointment among a segment of the Turkish people,” Altun said, pointing out that the same period showed how vital Ankara is for Brussels in issues such as the migration crisis as well as the fight against terrorism.

Altun further stressed that it is the EU’s turn to show good faith following Erdoğan’s statements last week and that sanctions threats are risky in terms of bilateral relations.

European leaders will discuss the future of Turkey-European Union relations and disputes over the Eastern Mediterranean at an upcoming summit next month.

Greece, with France's support, has disputed Turkey's energy exploration in the Eastern Mediterranean, trying to box in Turkish maritime territory based on small islands near the Turkish coast.