Turkey pulls out of Istanbul Convention on women's rights 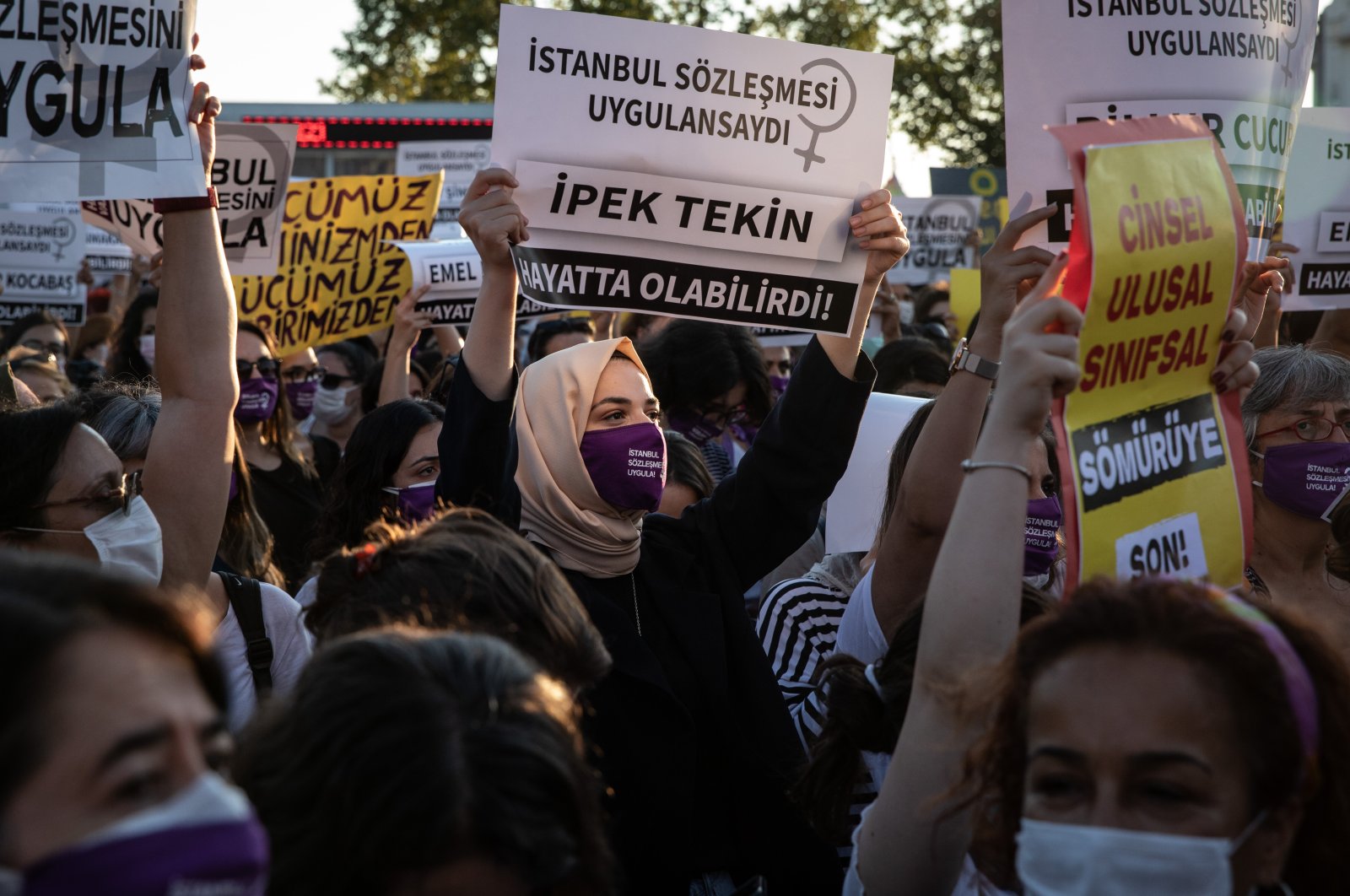 A woman holds a sign that reads "İpek Tekin could have been alive if Istanbul Convention was implemented" during a women's rights protest in Istanbul, Turkey, Aug. 5, 2020. (Getty Images)
by Daily Sabah with Agencies Mar 20, 2021 10:09 am
RECOMMENDED

Turkey has withdrawn from the Istanbul Convention on women's rights, world's first binding treaty to prevent and combat violence against women, according to a presidential decree published Saturday in the official gazette.

Officially called the Council of Europe Convention on Preventing and Combating Violence Against Women and Domestic Violence, the accord was established in 2011 and aims to create a legal framework to prevent and fight against violence against women and domestic violence, as well as promoting equality.

Ankara, which signed the accord in the same year and became the first country to ratify the convention, offered no reason for the withdrawal.

Opponents of the pact in Turkey say the convention undermines family unity, encourages divorce, and that its references to equality were being used by the LGBT community to gain broader acceptance in society.

Shortly after the announcement of the withdrawal, Vice President Fuat Oktay said in a post in Twitter that the government aims to further its sincere struggle to bring Turkish women's reputation and dignity to its deserved level by protecting traditional social structure. "There is no need to look for outside remedy or imitate others for this paramount goal. The solution is indeed lies in our traditions and customs, in our own," Oktay wrote.

Family, Labor and Social Services Minister Zehra Zümrüt Selçuk said Turkey's constitution and domestic regulations instead would be the "guarantee of the women's rights.”

“Violence against women is a crime against humanity and fighting with this crime is a human rights matter. What really matters are the principles. In this regard, we will carry out our fight in determination, like we have in the past, and we will continue to uphold a zero-tolerance policy,” Selçuk wrote on Twitter.

Critics of the withdrawal said it would put Turkey further out of step with the values of the European Union, which it remains a candidate to join. They argue the deal, and legislation approved in its wake, need to be implemented more stringently. Opponents also argued that the withdrawal should have been brought before the Parliament to be debated.

Rights groups and the opposition took to social media to decry the move, with the topic trending on Twitter. Several women's rights groups urged protests for later on Saturday, including in Ankara and Istanbul. Protests are planned in at least eight cities, local media reported.

"We reject withdrawing from the Istanbul Convention," Mor Çatı, an Istanbul-based foundation for victims of domestic violence, wrote on Twitter, calling for a protest in the city's Kadıköy district. Withdrawing from the convention will mean "letting women continue to be second class citizens and be killed,"

Main opposition Republican People's Party (CHP) Chairperson Kemal Kılıçdaroğlu released a video Twitter, saying that the rights of 42 million Turkish women cannot be stripped from them through a decree released at midnight. Gökçe Gökçen, deputy chairwoman of the CHP earlier wrote on Twitter that the withdrawal by a decree is "illegal and ignores the will of the parliament."

The executive boards and party caucuses the CHP and its Nation Alliance partner Good Party (IP) held extraordinary meetings Saturday upon the withdrawal from the convention and the dismissal of Central Bank Governor Naci Ağbal.

Following their meeting at the party headquarters in Ankara, CHP's women executives held a joint press conference, dismissing the move as "unconstitutional" since international agreements on human rights and basic rights and freedoms are ratified by the Parliament. "We don't recognize and will not recognize the decision taken by Erdoğan by disregarding the law and the Parliament," CHP Secretary-General Selin Sayek Böke said.

CHP's Women's Branch Chairperson Aylin Nazlıaka vowed to fight the withdrawal in the Parliament and on the streets and squares if necessary.

"This move is a huge setback to these efforts and all the more deplorable because it compromises the protection of women in Turkey, across Europe and beyond," she said in a statement.

Turkey is not the first country to move towards ditching the accord. Poland's highest court scrutinized the pact after a cabinet member said Warsaw should quit the treaty which the nationalist government considers too liberal.

Earlier this month, President Recep Tayyip Erdoğan said Turkey would form a new commission in the Parliament to work on preventing violence against women.

Domestic violence is a thorny issue for Turkey where dozens of women are killed every year at the hands of their spouses or relatives.

According to an official report released in November, more than 230 women were killed last year.