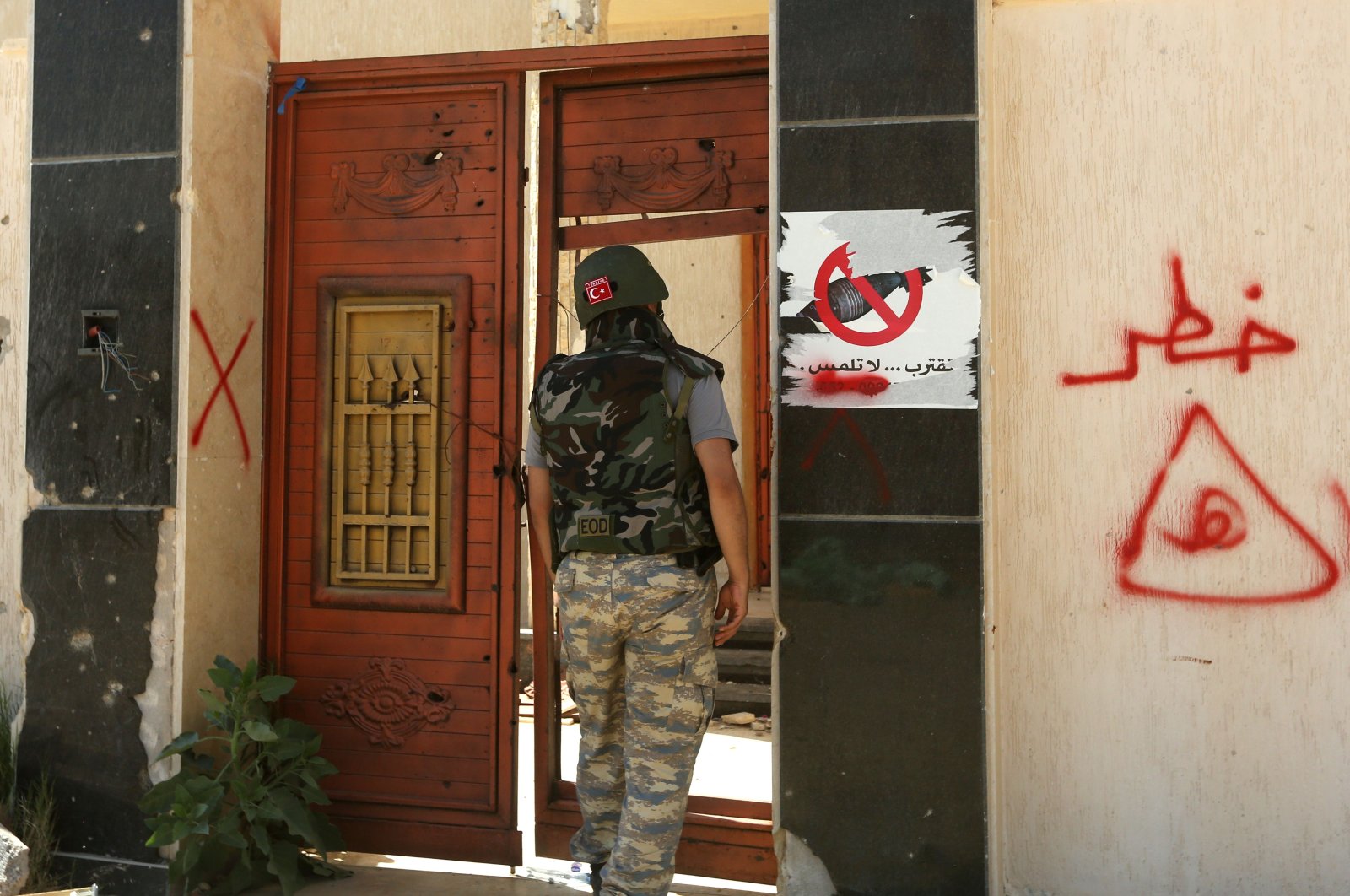 A Turkish deminer stands at the entrance of a house marked with a warning about the presence of mines in the Salah al-Din area, south of the Libyan capital Tripoli, on June 15, 2020. (AFP Photo)
by DAILY SABAH WITH AA Jun 18, 2020 11:31 am
RECOMMENDED

The Libyan Army is awaiting a United Nations report that will expose "crimes and genocides" committed by putschist Gen. Khalifa Haftar's militia in Tarhuna, a Libyan military source said Wednesday.

"What were committed of violations gives us no trust in Haftar ... and makes us reiterate what the Libyan Army high commander (Prime Minister Fayez Sarraj) says, that there is no place for Haftar in the future of Libya,” said Qanunu.

He added that Haftar was not and will not be a peace partner as he heads a "militia of criminals."

The army recently inflicted heavy blows on Haftar and liberated Tripoli and Tarhuna, in addition to other strategic locations, including al-Watiya air base, from his militias.

The internationally recognized Government of National Accord (GNA) has been under attack by Haftar's forces since April 2019, with more than 1,000 killed in the violence.

Most recently, 48 bodies were dug up from mass graves in Tarhuna city, an official announced Wednesday.

Libyan Deputy Interior Minister Mohammed al-Madaghi told reporters, "the mass graves that were discovered in Tarhuna are not an easy number and cannot be passed over or forgotten, and they will remain stuck in the memory of the relatives of the victims and in the Libyan and humanitarian memory as a whole."

He said that the number of recovered bodies reached 48 so far, in addition to a number of body parts, as the Interior Ministry is currently taking DNA samples to identify the unidentified bodies.

Tarhuna was the last stronghold in western Libya controlled by militias loyal to Haftar before it was recaptured in early June by forces allied with the Tripoli-based government.

Libyan authorities announced that international efforts are underway to establish a fact-finding committee to investigate the violations of Haftar's militias, including planting mines and digging mass graves, as well as other violations in Tripoli and Tarhuna.

As the uncovered mass graves reveal the extent of war crimes committed by Haftar forces, bombs and mines planted by these militants continue to threaten civilians’ lives in recently liberated areas.

Earlier in the day, Libyan officials told a news conference that Haftar's militias and Russian mercenaries planted improvised explosive devices (IEDs) in residential areas in the central city of Sirte.

On Tuesday, the Libyan Center for Mine Clearance and War Remnants said that landmines planted by Haftar's militias had killed 39 civilians and injured 71 others south of Tripoli.

Libya has been in turmoil since 2011 when a NATO-backed uprising toppled leader Moammar Gadhafi, who was later killed. The country has since been split between the GNA in Tripoli and Haftar's illegitimate forces based in the east, each backed by different foreign governments.

The United Nations-recognized GNA led by Sarraj is backed by Turkey, which sent troops and mercenaries to protect the capital in January, and also by Italy and Qatar. Rival eastern-based forces under the command of Haftar are supported by France, Russia, Jordan, the United Arab Emirates and other key Arab countries.