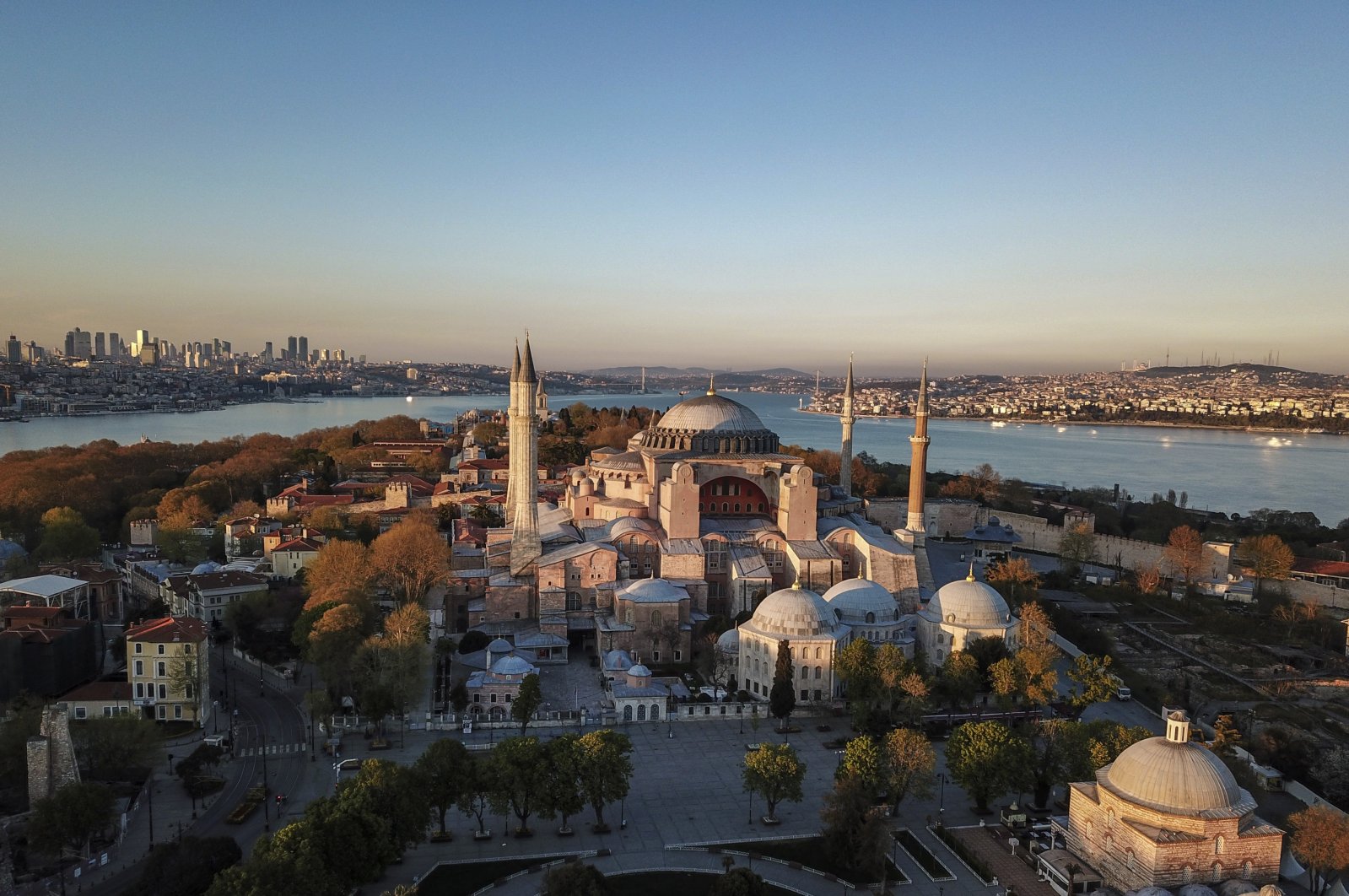 An aerial view of the Hagia Sophia Grand Mosque in the historic Sultanahmet district of Istanbul, April 25, 2020. (AP Photo)
by Anadolu Agency Jul 28, 2020 11:42 am
RECOMMENDED

Greece flying flags at half-mast and tolling church bells over last week's opening of Istanbul's Hagia Sophia Grand Mosque are matters entirely for Greece and are of no concern for Turkey, said the leader of Turkey's Nationalist Movement Party (MHP) on Monday.

The fact that Greece claims a degree of proprietorship of the Hagia Sophia Grand Mosque, which is well within Turkey's legitimate and sovereign borders, is proof that the country is stuck in the past by 567 years – the year the Ottomans conquered Istanbul, said a statement by MHP Chairman Devlet Bahçeli.

The Hagia Sophia Grand Mosque reopened for worship thanks to the joint efforts of the People's Alliance made up of the ruling Justice and Development Party (AK Party) and the MHP after a court annulled a 1934 Cabinet decree that converted Hagia Sophia into a museum. Before that, it had been a mosque for nearly 500 years.

Bahçeli hailed the court ruling as the most important event in recent history, calling Greece's actions in response "fascistic."

"This attitude from Greece does not serve for stability, peace or tranquility," he added.

Hagia Sophia served as a church for 916 years until the conquest of Istanbul, after which it functioned as a mosque from 1453 to 1934. From the latter date until recently, the structure has served as a museum.

In 1985, it was added to the UNESCO World Heritage List.

Hagia Sophia is not only a mosque but one of Turkey's top tourist sites and will remain open for domestic and foreign visitors.

President Recep Tayyip Erdoğan also on Monday said he believed the reversion of Hagia Sophia from a museum to a mosque ought to please followers of all faiths.

Erdoğan's remarks came after a press conference conducted following a Cabinet meeting in the capital Ankara and continued for over 2 1/2 hours.

Responding to criticism from certain foreign nations regarding Turkey's move to revert the monumental structure into a mosque, Erdoğan vowed that the Turkish government would not let anyone interfere with the country's internal affairs or values.

The Turkish leader underlined that a total of 500 guards would be on hand to protect the architectural wonder.