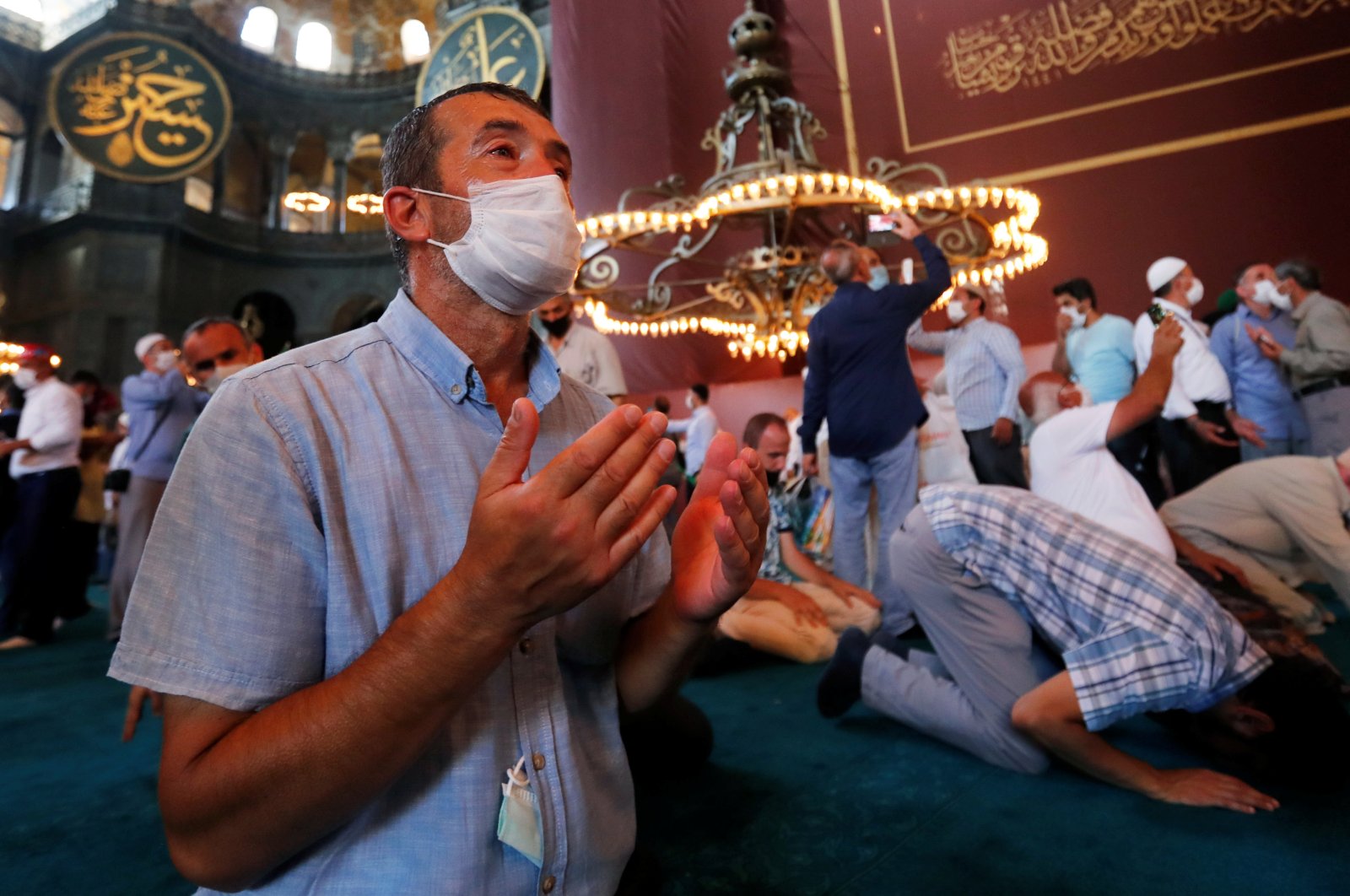 Muslims attending the first Friday prayers inside Hagia Sophia Grand Mosque in 86 years expressed excitement over its reversion from a museum, describing it as a major step for the Islamic world.

"My years went by me, fighting for Hagia Sophia to be reverted to a mosque," said Burhan Hayat, 55, of Istanbul.

Hayat grew up near Hagia Sophia as his father worked as a salesman around the historical landmark. He closely witnessed the former museum's condition over time.

"Having this liberation signals the beginning of a new era. This is a very important, sacred feeling as if we are all signing a very significant, historical document with transformative powers," he said in an interview with the Daily Sabah just after the conclusion of the first Friday prayers.

Having visited the structure when it was a museum as well, Hayat highlighted the stark difference between the two atmospheres.

"I once visited Hagia Sophia back in 1983 (just after the military coup in 1980). At that time, one of our friends, Yusuf, shouted the Takbir (the Arabic phrase Allāhu akbar which translates to Allah is greater than everything), on the second floor of the grand building. However, the security guard immediately took action and started to chase him as if he had committed a crime," Hayat recounted. "Now I let you see the differences between today and the past."

Underlining that he plans to visit the heritage site to say his prayers whenever he can, Hayat said that "everyone needs to be grateful for this reversion."

Ismail Kandemir, who spearheaded the reversion by filing a court case, said he was overwhelmed with joy.

Speaking to Anadolu Agency (AA), Kandemir expressed his happiness, highlighting that his dream has come true.

"I am flying like a bird out of joy," said Kandemir, who attended the prayers Friday with his grandson.

However, the adults were not the only ones who were enjoying the atmosphere.

Uğur Durmuş, 14, was among those who traveled to Istanbul just to attend the inauguration process.

Saying that he has been waiting for this day for years, despite his young age, Durmuş told Daily Sabah that he senses a "warm, welcoming atmosphere" at the mosque.

"I came from Bursa. Right now I am experiencing very complicated feelings, but all of them are very positive. I have been waiting for this day since I first started to attend the prayers two years ago," the young man said.

Underscoring that this is the first time he ever visited the structure, Durmuş said that from now on, he will come to Hagia Sophia mosque whenever he comes to Istanbul.

The visitors on the big day were not only from within Turkey but also from abroad.

"Today is the day that Muslims from all over the world unite. Thus, we came from Paris, France," said Halil Bulut, adding that he congratulates this big day of the entire Muslim world.

Another visitor from abroad, Gohari Imam, who came from India, told Anadolu Agency (AA) that he has been experiencing an overwhelming enthusiasm.

"Today is an important day not only for Turks but for all the Muslims," he said, adding that he has been witnessing history by simply being in Istanbul on this day.

"I will talk about this day to my friends and family in 20-30 years from now," Imam said.

Mohamad Nur, who came from Chad, also said that he was happy to be there, thanking Turkey for the opportunity.

An African-American woman Sai Serrah was also present during the Friday prayers, expressing that she is proud to be a part of this historical ceremony.

"I came here with my husband and children. It is a perfect day. I am very honored to be in here," she said.