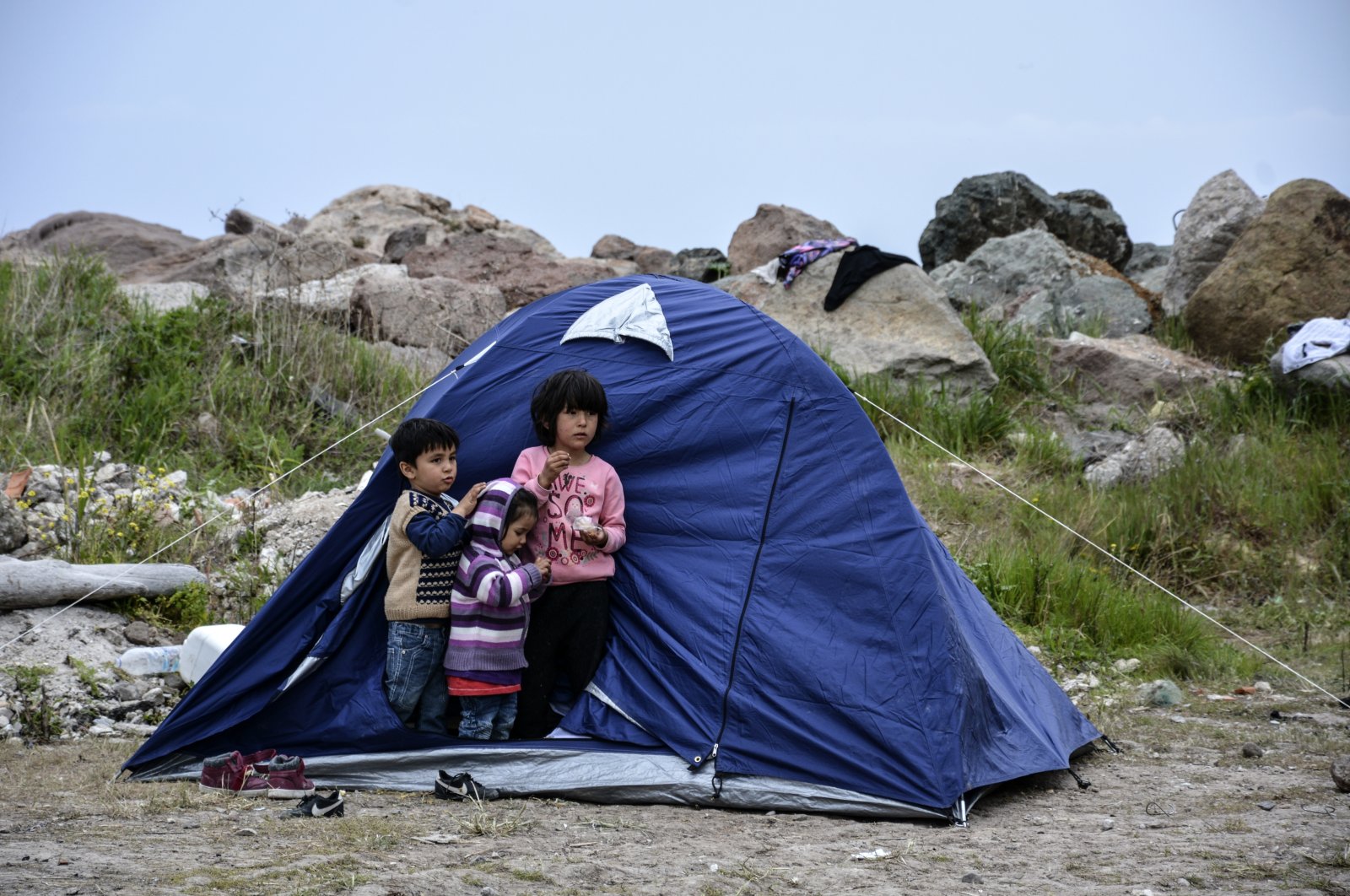 Children stand outside a tent in the village of Petra on the northeastern Aegean island of Lesbos, Greece, Friday, March 27, 2020. (AP Photo)
by DAILY SABAH Mar 31, 2020 12:50 pm
Edited By Dilara Aslan
RECOMMENDED

“Authorities claim they are holding the new arrivals, including children, persons with disabilities, older people and pregnant women, in quarantine due to COVID-19, but the absence of even basic health precautions is likely to help the virus spread,” HRW stated in a report.

After the migrant flow to Greece increased this month, the country started to be the target of heavy criticism. Greece decided on March 1 to block any new asylum applications for one month, a move at odds with European law and the Geneva Convention while the U.N. agency for refugees had said the Greek decision has no legal basis.

“If the government is serious about preventing COVID-19 transmission and illness among migrants and asylum-seekers, it needs to scale up testing, provide more tents, and give people enough toilets, water and soap and put in place prevention interventions,” said Belkis Wille, senior crisis and conflict researcher at Human Rights Watch. “Forcing people, some of whom are at high risk of severe disease or death, to live in dirty, ... unsanitary conditions, cramped together in close quarters, is a recipe for spreading the virus, not to mention is degrading and inhumane.”

The watch highlighted that governments could put people into quarantine in the face of valid risks but that these should be fit to serve the purpose of protecting public health. It should be imposed in a nonarbitrary and nondiscriminatory manner.

Greece, however, is detaining migrants because of their immigration status and not providing them with appropriate health protections as expressed in the International Health Regulations or current World Health Organization (WHO) guidance, it elaborated.

Saying that women, men and children are being detained in unsanitary and cramped conditions, regardless of whether the country they have arrived from is considered a high risk COVID-19 country, HRW added that there is no indication that they will be released if found to be virus-free.

“The authorities do not appear to have tested the detainees for the virus, besides taking their temperature upon arrival. Nor will they be released after the 14-day WHO-recommended isolation period. Instead, they face continued immigration detention, even though Greece most likely cannot readmit them to Turkey as a transit country or return them to their countries of origin in the foreseeable future,” the report continued.

Ankara recently announced that it would no longer try to stop asylum-seekers, refugees and migrants from crossing into Europe. Thousands have since flocked to Turkey's Edirne province – which borders Greece and Bulgaria – to make their way into Europe.

The Greek reaction has been harsh, including attacking, tear-gassing and killing several people who attempted to cross to Greece from Turkey.

Turkey harshly criticized the abuse and said the European Union seems to have lost its basic values of human rights.

Turkey’s decision to open the borders came after the international community remained silent in the face of the Bashar Assad regime’s assaults on civilians and civilian settlements. Turkey had frequently voiced that the surge in violence would cause another major refugee wave, which later came true as the Russian-backed regime displaced around 1 million people from northwestern Syria’s Idlib province. Criticizing the lack of international support on sharing the burden, Turkey stated it would not be able to absorb yet another influx of refugees, as it already hosts 3.7 million, more than any other country in the world.

Yet, in the face of the coronavirus pandemic, Turkey decided to settle a large number of refugees and migrants, previously waiting at the Greek border to repatriation centers. Nearly 5,800 refugees and migrants, who were camping near the Pazarkule border gate in Edirne province in hope of crossing to reach Europe, have been sent to repatriation centers in nine different provinces to prevent a possible spread of coronavirus, Interior Minister Süleyman Soylu announced Sunday.

According to the most recent official figures, some 147,132 asylum-seekers had crossed to Greece through two control points in Edirne, Turkey's western border.

On March 25 and 26, HRW remotely interviewed four men who said they had been held in the Malakassa detention site since March 14. Each of them said the roughly 450 detainees with them had severely limited access to water, electricity, hygiene products, clothing and blankets. They said detainees were sleeping in cramped tents with up to 10 people, often from different families, which could be an incubator for the spread of the coronavirus.

Just days after hitting half a million, the number of coronavirus cases worldwide crossed the 755,000 mark on Monday, according to data compiled by U.S.-based Johns Hopkins University.

The virus, also known as COVID-19, which emerged in Wuhan, China, last December, has spread to at least 177 countries and regions around the globe, with over 36,000 deaths worldwide.