Countdown to an independent Turkish Cypriot State has begun 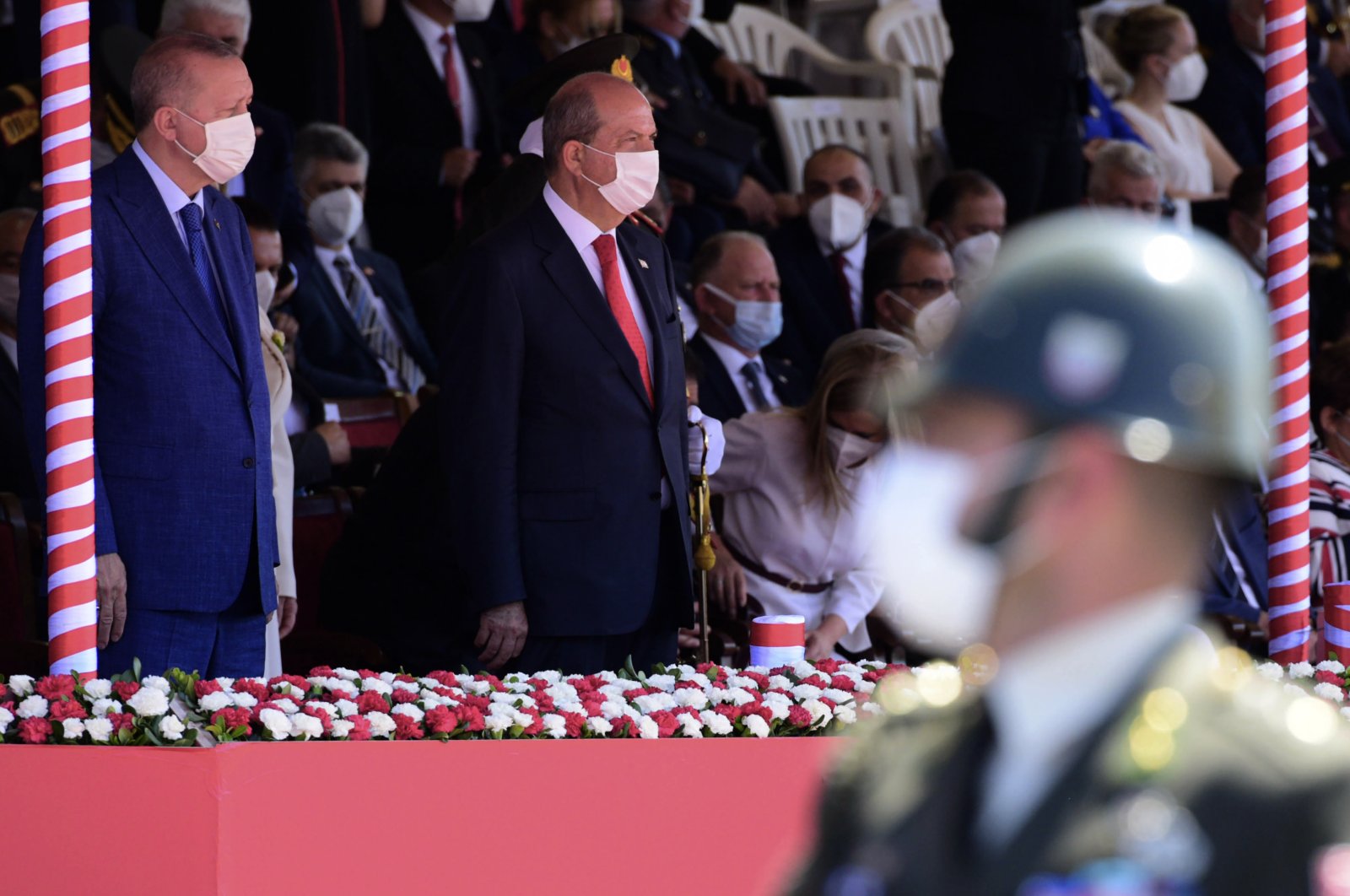 Accompanied by a very large delegation, President Recep Tayyip Erdoğan visited the Turkish Republic of Northern Cyprus (TRNC) on the first day of Eid al-Adha and the 47th anniversary of Turkey’s peace operation in the island. All the messages to come of the two-day visit underlined that the Turkish people will not wait another 50 years to establish an equal and sovereign Turkish state.

The statements made during the historic visit, meaningful in all respects, were carefully monitored by the whole world. TRNC President Ersin Tatar and Erdoğan have both said that they will not waste another 50 years as the European Union sides with Greek Cyprus and supports Greece's unfair distraction policies, as Turkish Cypriots have only lost to date.

Underlining his determination, Erdoğan said: "No one from us should expect a return from where we are. We do not have another 50 years to spend on solutions whose invalidity has been proven.” Erdoğan and Tatar's messages drew quick reactions. Somewhat far-fetched and emotional statements that completely reject the realities on the ground poured in from the EU officials and the U.S. secretary of state, indicating that they were in fact shocked.

However, the visit and the aforementioned messages should not come as a surprise to Washington, Athens, Brussels, Paris and Tel Aviv. As of recently, it has been made very clear that Ankara has stepped up its diplomatic efforts in the international arena with the administration of the TRNC. Finally, the message expressed by Ankara and Lefkoşa (Nicosia), especially at the informal 5+1 talks held in Geneva in April, was a harbinger of where we stand today.

In Geneva, the Turkish delegation told all parties that the only peace plan that Ankara and Nicosia would be willing to accept involves the TRNC becoming a fully independent state with equal status and rights on the island. Meanwhile, Turkey and the TRNC continued an intensive diplomatic campaign to gather support for this new, independent state from different countries around the world. In the Central Asian Turkish Republics, especially Azerbaijan and Pakistan, the possibility of the newly independent Turkish Republic of Cyprus being recognized is strengthened by the day.

But how did it come to this? The number of unconstructive steps taken by the Greek Cypriots, Greece and the EU cannot be counted. In 2017 the parties met in Crans Montana, Switzerland, where after days of negotiations, Greece and the Greek Cypriots abandoned the table. The unfair policies of the EU, which objected to the statements made from Nicosia, have played a big role in the resulting current situation. The Turkish side has accepted federal proposals for a solution since the 1960s, while the Greek Cypriots rejected the U.N.'s Annan Plan in 2004. Greek Cyprus' EU accession is considered the greatest injustice to the Turkish Cypriots.

Despite its founding agreements on the island, the EU, which ignored the will, presence and equality of the Turkish side and violated Turkey as a guarantor, actually impeded a federal solution on the island with this decision. On the one hand, while the embargo on the recognition of the TRNC as an independent state in the international arena continued, on the other hand, it was Brussels and Washington that allowed the island's other partner to become an EU member while remaining silent about it.

It is no wonder that the two sides, where the Turkish Cypriots have not been afforded the same rights for half a century now, both reject unresolved and unequal proposals. They believe that the only way for the TRNC to attain its rights is to become an independent state, as federalism and confederalism are no longer feasible options. Contrarily, the Greek side, which appears to advocate for a federation to join the EU, has never entertained the idea of a state or society with equal rights on the island, ignoring the rights of the Turkish Cypriots in all diplomatic arenas for the past 58 years.

For many years, by rejecting every possible and fair solution, the Greek side tried to turn the Turkish Cypriot people into a minority of sorts on the island. Beneath the fact that Erdoğan and Tatar no longer accept the so-called confederate or federation-oriented plans on the island lies this historical background and facts.

Reactions from the U.N., the U.S. and EU to Ankara and Nicosia's initiative on the status of the closed Varosha, to the same extent decry neutrality and disregard the legal facts of the Turkish side. However, in his speech in the TRNC, Erdoğan said that the work being carried out in accordance with property rights in Varosha will open the door to a new era that will benefit all. Ankara provided Brussels and Washington with a clear response after they accused Turkey of unilaterally changing the status of the city. Ankara has stated that these criticisms reflect the EU's detachment from the truth of the situation in Cyprus, describing the statements as null for Turkey.

In October last year, after a 46-year wait, some parts of the coastal area of closed Varosha, in the eastern part of Famagusta in Northern Turkish Cyprus side were decommissioned. Varosha, which was referred to as the ghost city, has been closed since Turkey's peace operation in 1974 but was previously the most important tourist and entertainment center on the island. In 1974, during the advance of Turkish troops, 15,000 Greeks living in the city left their homes before the region was closed off by barbed wire and declared a military zone.

In light of these efforts carried out in accordance with property rights, Turkey and the TRNC believe it is time for the start of a new chapter in Varosha. The opening will begin in the pilot area, which corresponds to 3.5% of the city. "The steps taken will not create new grievances in Maraş, on the contrary, existing grievances will be eliminated. We have no eyes on anyone's land, about them, or property. No one can reach out to us and the Turkish Republic of Northern Cyprus’s rights as well,” Erdoğan said about the opening of the city.

Ankara and Nicosia will not abandon their uncompromising attitude in reaction to criticisms from Brussels, Washington and Athens as a new chapter opens for the Turkish Cypriots. In his speech, Erdoğan noted that these circles have been doing their best to overshadow the visit from day one. Addressing the anti-Turkey lobbies in the U.S., Erdoğan, said: “It seems that as a guarantor country, despite Turkey’s peace operation that we have carried out in order to ensure life security and protect their rights and freedoms, our brothers on the island have still not been able to receive them for 47 years. If it takes another 47, even 147 or 247 years, the Turkish people of Cyprus will not compromise their freedom. In fact, I call on them to come to the TRNC as soon as possible, to recognize the state here and take advantage of the beauty of this beautiful geography. In addition, neither external messages nor internal initiatives have any value other than empty noise in our eyes,” he said.

Another point on which Turkey and the TRNC are adamant is that the next negotiation process only includes the two sides of the island and the two sovereign states on equal terms.

Now, as President Erdoğan has pointed out, it seems the time has come for the Cyprus talks to be held between the two states, alone. Addressing reporters accompanying him on an official visit to the TRNC on Wednesday, he stressed that the Turkish side is committed to ensuring that third parties do not interfere in the process. "As the Turkish side, we have opened a new page in the Cyprus issue, which is our national cause, without changing our constructive understanding. Instead of adhering to the parameters that have not been achieved so far, we offer a vision of a fair, sustainable and realistic solution together with the TRNC," he said.

Now, these messages from Ankara and Nicosia need to be thoroughly understood and digested by those who have maintained a policy of distraction in Cyprus for 58 years and treat the Turkish Cypriot people as a minority. Meanwhile, it is predicted that the TRNC will take much faster steps in becoming a more equal, sovereign and internationally recognized state in the half-century to come. It is inevitable that the interlocutors will act at the same speed, otherwise, they will not be able to keep up with the steps Ankara and Nicosia are set to take.