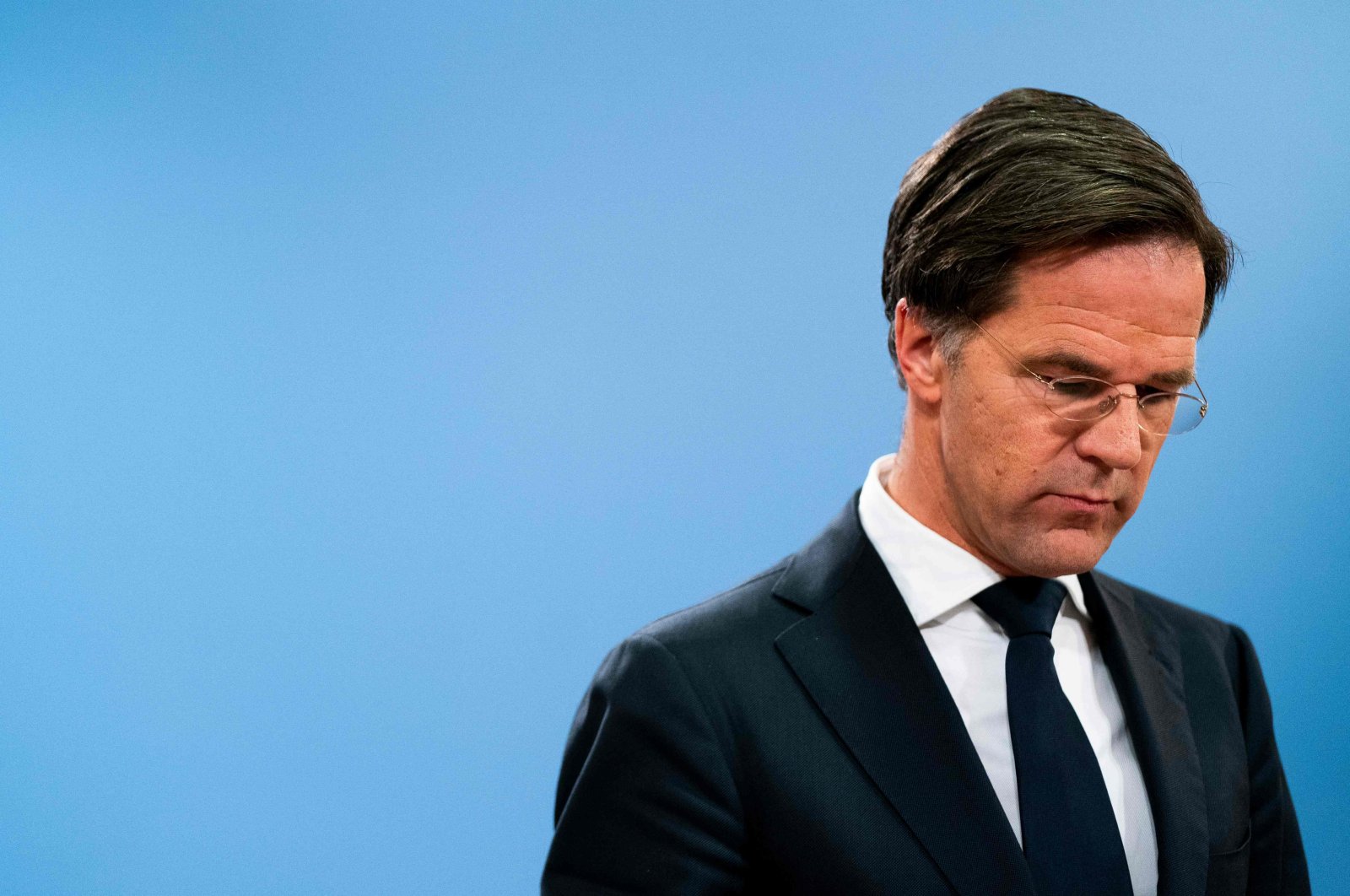 Seemingly a simple case of tax fraud at first glance, the recent child subsidies scandal that ousted the Dutch government is actually the result of years of institutionalized discrimination by the state toward the Netherlands’ migrant communities, including Turks who make up a considerable proportion of the victims

In a surprising turn of events, a fraud scandal has left the Netherlands without a government over the weekend, just two months ahead of the country's scheduled general elections. Although unexpected at first, the bombshell was the culmination of a series of events that the government has tried to push back over the years but nonetheless garnered public attention. The movement gained momentum as more and more families came forward as victims, with multiple inquiries revealing the scale of the fraud which would come to be known as the "child subsidies scandal." Of what was revealed when the fraud came to light, the most striking information found was the extent of the discrimination migrant families face, including Turks. According to prominent Turkish-Dutch figures who point to the Dutch government's decades of mistreatment, the revelation is not a shock, as the signs of institutionalized racism were already there and it was only a matter of time before a scandal like this exposed the truth.

"The government’s so-called policies, which were enforced with the attempt to prevent fraud, alongside institutionalized racism, ended up in a huge failure," Turkish-Dutch lawmaker and parliamentary group head of the DENK (Think) Party, Tunahan Kuzu said, pointing to the roots of the scandal that led to the resignation of the Dutch government.

According to Kuzu, the current troubles plaguing Dutch politics stem from the heavy influence far-right politicians such as Geert Wilders have had over the past 20 years.

"Even though the far-right parties in the Netherlands are not included in the government, when it comes to political rhetoric, they are the dominant power. Their (the far-right’s) statements, which get a remarkable (positive) reaction from the voters, are being used by the so-called social democrats and liberals time and time again and finally resulted in unbelievable cruelty against the migrant citizens," the parliamentarian expressed.

Dutch Prime Minister Mark Rutte said on Jan. 15 that he had handed the resignation of his government over to King Willem-Alexander, taking political responsibility for a scandal involving investigations into child welfare payments that wrongly labeled thousands of parents as fraudsters. "The rule of law must protect its citizens from an all-powerful government, and here that's gone terribly wrong," Rutte told a press conference after stepping down, adding that responsibility for the failed handling of the child care subsidy lies with the Cabinet.

The resignation threw many people off as just three days before stepping down on Jan. 12, sources close to Rutte told Nieuwsuur, "The government should not resign over the child benefits scandal despite senior ministers being implicated in the tax office’s excessive and discriminatory anti-fraud strategy." Adding that it would be "purely symbolic" to resign only a few months before the March elections as the ministers would remain in their positions until the polls as "caretakers."

"DENK pointed at the institutionalized racism for the first time in 2016 and today, thanks to our party’s intense efforts, now it is something that came to light. The government, on the other hand, has fallen with an inevitable ultimate failure," Kuzu expressed, highlighting that the scandal goes back years and that the government chose to overlook warnings.

Over the last two years, numerous investigations revealed that the Belastingdienst, the Netherlands’ tax administration, victimized thousands of families. The Belastingdienst falsely accused families of defrauding the child care tax subsidies structure under the pretext of taking measures against tax fraud and demanded recompensation. From 2014 to 2019, the tax office reached out to an estimated 26,000 families, of which most were revealed to be either dual passport holders or migrants.

As a result, thousands struggled with the burden of heavy debt, amounting to tens of thousands of euros and were barred from applying for child care support in the future. The unexpected monetary burden caused many families' financial collapse but also had a human impact, with some parents filing for divorce.

No compensation is enough

"This is the biggest scandal of the Dutch state yet and it seems history will not forget this. Most victim families had suffered from major trauma due to this scandal, some of them even attempted to suicide," said Turk-Islam Culture Federation of Netherlands head Ömer Altay.

"Although the court decided to pay 30,000 euros ($36,340) in compensation to each victimized family, the scale of the trauma is 10 times worse than any number that can be paid," he highlighted.

Despite the court's decision, so far the families have received only 750 euros in compensation, Dutch News reported on Jan. 15. During his speech on the same day following the resignation, Rutte swore that the families' financial compensation was a priority that needed to be handled. Last week, determined to receive the compensation they are owed, 20 families came together and took legal action against several ministers, including Finance Minister Wopke Hoekstra, accusing the officials of negligence and failing to adhere to the principles of good governance.

Altay stated that although no federation members were victims of the scandal, it is estimated that one-third of the victims were Turkish born.

Back in May 2020, the Dutch tax authority admitted to having used applicants' second nationality as an official criterion in determining the risk of fraud – a method that has been in implementation since 2012. The authority also confessed that the over 11,000 people with dual nationality were subject to stricter checks than Dutch citizens.

The Hague-based privacy watchdog Autoriteit Persoonsgegevens (AP) said on July 17, 2020, said that the tax authority had obtained the information about the families' second nationalities illegally. Back in 2015, Dutch municipalities came to the decision to drop citizens' second nationalities and only register the first in an attempt to avoid accusations of discrimination. But the Belastingdienst illegally accessed the municipalities' older records to determine whether families are of Turkish or Moroccan descent. An attorney representing 600 of the victimized families, Orlando Kadir, told Dutch News that the frauded families were determined “as a result of ethnic profiling by bureaucrats who picked out their foreign-looking names.”

The Netherlands has been experiencing a surge in racist, anti-Semitic, anti-Islam and hate-driven attacks, unsettling the population. Concerned Muslim citizens established the DENK Party in February 2015 to focus on combating widespread racism, discrimination and xenophobia.

Turks are the second-largest ethnic group in the Netherlands following the Dutch, with a population of about 2 million. Up until the last decade, the Netherlands was considered to be a country like Germany in terms of its Turkish diaspora but sentiments changed and by 2009, Human Rights Watch (HRW) had released a report highlighting that the country's legislation violates the rights of the Turks.

“We have been observing that in the Netherlands in general, the Turkish community’s trust has been diminishing gradually not only toward the fallen government but also toward the Dutch state. The Islamophobia and xenophobia, which is rising for over the past 20 years, have reached inevitable levels and as a result, the uneasiness among the Turkish society grows in relation to that,” Altay said.

Over the past decade, the tolerant political climate designed to allow for the freedom of speech has allowed far-right sympathizers with violent tendencies to expand their scope in Europe, including the Netherlands.

For instance, Turkish mosques in Europe are frequently the target of Islamaphobic attacks, the latest of which took place at a mosque in the city of Zaandam in the northwestern Netherlands in November. Mosques in the Netherlands have endured dozens of attacks of varying extent in recent years. Culprits often attempt to burn the religious buildings down using explosives or Molotov cocktails and deface the walls, spraypainting terrorist symbols and racial slurs.

“The far-right and its fractions do not hesitate to attack mosques. As you can see, (the Netherlands) has lost its charm,” Altay further expressed, adding that there are too many incidents to mention in one single article.

The scandal is just the icing on the cake when it comes to the deep-rooted racism and discrimination in the Netherlands, but experts do not expect a shift any time soon in the alarming far-right political rhetoric that grips the country.

"In the Netherlands, the far-right parties have been gaining strength gradually and unfortunately racist ideas gain support from the people. So, I do not believe that the far-right parties will lose voter support over this scandal. However, I believe the voters realized the importance of DENK even more," Kuzu said on his expectations of the coming elections.

"I hope our long-lasting political struggle would end up in DENK’s growth and fruitful fight against the institutionalized racism," he continued.

Speaking to Dutch News, Rem Korteweg from the Hague-based Clingendael Institute also said that the scandal is unlikely to have any impact on the upcoming elections. “The minister who was in charge of the child benefits scheme is now in opposition and has resigned; civil servants are being blamed for the predatory tax office. The government is taking ‘political responsibility’ but with little ‘political cost,'” he said.

The upcoming general elections are expected to take place on March 17 and Rutte made it clear that he is determined to lead his center-right People's Party for Freedom and Democracy (VVD) to the polls. The recent polls estimate that the VVD is likely to win for the fourth time, in spite of the scandal, backed by nearly 30% of voters. It is followed by the Wilders' anti-Islam Party for Freedom (PVV), which, although has less than half of the VVD's support, still reveals the extent of the Dutch people's support of Islamaphobic and xenophobic views.

Wilders lost four seats in the European Parliament election in May 2019. In the same year, Wilders canceled a Prophet Muhammad cartoon contest, sparking protests in Pakistan. The outspoken anti-Islam party leader said he decided to "let the contest go" following death threats and concerns other people could be put at risk. Wilders added that his fight against Islam would continue and he would not be discouraged by threats.

The Dutch politician was also fined 5,000 euros in 2016 on charges of hate speech and discrimination. He faced charges of discrimination and inciting racial hatred at a rally in 2014, where he led supporters in chanting that they wanted fewer Moroccans in the Netherlands.

Back in October 2020, Wilders came under fire for sharing a defamatory cartoon of Turkish President Recep Tayyip Erdoğan on social media, causing the Turkish president himself, Foreign Minister Mevlüt Çavuşoğlu and other high-ranking Turkish officials to denounce the racist lawmaker. "There is this so-called Dutch deputy (Geert Wilders) who speaks ill of us. Unlike him, we don't condone racism, and fascists have no place in Turkey," Erdoğan had said. Wilders shared the cartoon, which portrays a likeness of Erdoğan wearing a bomb-shaped hat bearing the logo of the ruling Justice and Development Party (AK Party) on his head, along with the headline "terrorist."