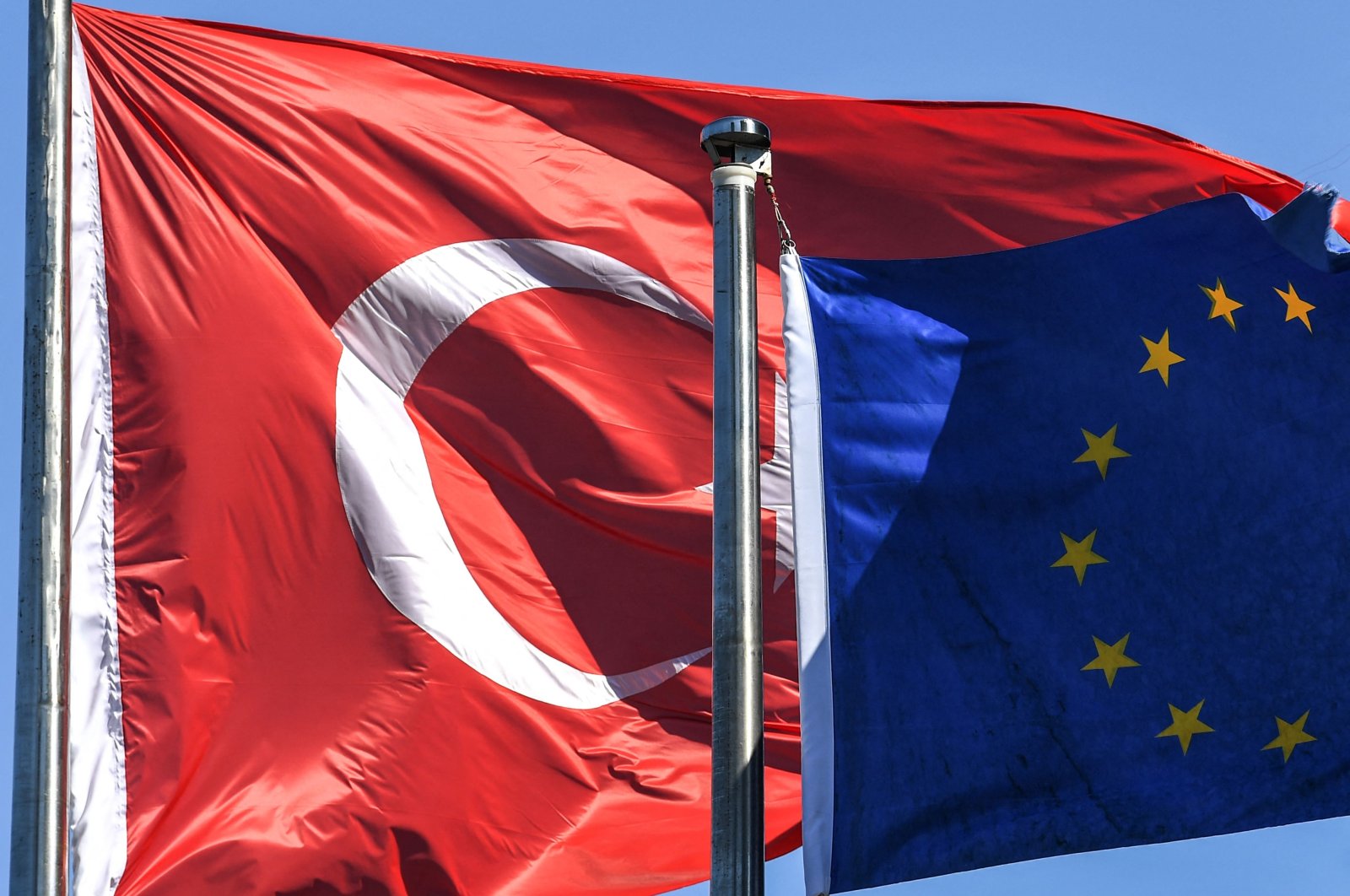 The Turkish flag and European Union flag flutter in the wind in the Maslak financial and business district in Istanbul, Turkey, Aug. 15, 2018. (AFP Photo)
by Nur Özkan Erbay
Apr 01, 2021 1:42 pm

Relations between Turkey and the European Union are perhaps at one of the most strained points in the history of the accord. While tensions stemming from the Eastern Mediterranean and the COVID-19 pandemic have been a focal point over the past year, relations finally appear to be approaching new ground, which could mark an important beginning in bilateral relations. The president of the Parliamentary Assembly of the Council of Europe, Rik Daems, who visited Turkey this past week, and the head of the European Commission, Ursula von der Leyen, and European Council President Charles Michel will visit Turkey next Tuesday to discuss the future of Turkey-EU ties with President Recep Tayyip Erdoğan.

Over the last three years in particular, the unfair approaches of EU administrations that assume that only one side is right and various disputes have created tension along the Ankara-Brussels line. Since Turkey applied for EU membership in 1987 it has not given up on the goal despite the resistance and unilateral rejection it has faced in the interim 30 years. Despite the momentum that grows by the year in the economic, commercial, social and political spheres, ties between Turkey and the bloc have suffered as a result of the unilateral and unfair approaches of countries, such as Greece and the Greek Cypriot administration, on issues in which Turkey is in the right.

Disputes within the EU and the growing influence of extremist right- and left-wing political parties in member states are reflected in the hostility in Europe against foreigners and Turkish people being used as leverage in current politics. Each time, Brussels opted to focus on what Turkey was doing politically, rather than the potential mutually beneficial geo-strategic gains it could achieve with the country, and used rhetoric calling Turkey completely "wrong" or fundamentally "unfair" on disputed issues.

Up until now, despite Ankara's consistently positive messages, Brussels' statements have always been in the same vein. "Turkey is moving away, accession negotiations have come to a standstill in the act, no opening or closing of new chapters is considered, and no negotiations on updating the customs union are envisaged.”

Furthermore, while the EU on the one hand stressed the need to "improve democratic runs in Turkey," on the other, it only gave conditional support to Turkey against the Gulenist Terror Group (FETÖ) coup attempt on July 15, 2016. All these hypocritical policies have also aggravated the lack of trust between the EU and Turkey over the last four years.

Although the Turkey-EU Accession Council meeting in 2019 was promising, the EU's commitments such as the revision of the Customs Union and visa liberalization were not fulfilled. In order to stall these processes, the bloc brought up Turkey's legitimate drilling activities in the Eastern Mediterranean, it's right to guarantee the Turkish Republic of Northern Cyprus and Turkey's operations against the PKK terrorist corridor in northern Syria, making excuses out of the issues.

On the other hand, Turkey-EU relations gained new momentum in the second half of 2019, when the EU's High Representative for Foreign Relations and Security Policy Joseph Borell took office. A relatively more effective framework was established, oriented around communication.

After all, Turkey's recent strong, positive messages on the future of the relations, its vital role in both migration and counterterrorism issues as well the great potential economic and trade relations after COVID-19 seem to have had an impact on the bloc, which now has a relatively positive stance toward the nation. In addition, the Biden administration's new policies targeting not only Europe but also Russia, China and the Middle East, require the EU to align its geo-political targets in line with Turkey more strategically in the long term.

Perhaps this is why German Chancellor Angela Merkel, the most powerful actor in EU politics, said before the EU leaders' summit last week that she appreciated Turkey's steps in the Eastern Mediterranean and its constructive approach. Similar to Merkel, Italian Prime Minister Mario Draghi also commented on Turkey. "The EU needs to work on concrete proposals for a positive agenda that promotes a constructive dynamic in terms of regional stability. In other words, it's easy to feed opinions in the opposite direction. It would be much better to build future relationships. There are many issues where this positive attitude is important. Immigration, counterterrorism and customs union issues are areas of cooperation." Spanish Foreign Minister Arancha Gonzalez Laya also stressed the need to follow a positive agenda in relations with Turkey.

Now, given all the calls for a positive agenda and the results of the summit, we wait to see when the customs union agreement will be updated (a move Ankara expects) and when visa liberalization for Turkish citizens will be enacted. Otherwise, history is bound to repeat itself. If Turkey is to endure another distraction process, it will cause great disappointment. While there are politically disputed areas, such as the Eastern Mediterranean, irregular migration, COVID-19 and the fight against terrorism, if the EU no longer takes concrete steps in its commitments then it is no longer possible for Ankara to sustain its constructive approaches after the many sacrifices it has made in these areas so far.

At this point, all eyes will be on Meyer and Michel's meetings in Ankara next week, the steps taken by the European Commission and the summit to be held in June 2021. The fact that EU leaders seem to be leaning toward a positive and constructive agenda is seen as positive by Ankara after the bloc in recent months evaluated sanctioning Turkey due to Greece's intransigent attitude, which escalated tensions in the Eastern Mediterranean. In fact, it is understood that Brussels sees Ankara as an indispensable partner, where mutual interests are discussed on a common and equitable basis. In other words, the EU has realized that it cannot use its unilateral regional policies as a stick and impose them on Turkey without consultation. Now the EU is the party that needs to take concrete steps in order for Ankara to take these visits and promises seriously. If revising the customs union and visa liberalization are postponed once more, as expressed in the March 18, 2016 agreement. it will dampen the positive environment.

Meanwhile, "The EU has a strategic interest in the development of a cooperative and mutually beneficial relationship with Turkey," Borell wrote on his blog dedicated to EU foreign policy this week.

As Borell emphasized, one of the most important areas of cooperation is in the economy since Turkish exports to the EU total 69.8 billion euros ($81.8 billion) and the country receives 58.5 billion euros of its foreign direct investment (FDI) from EU countries.

Borell also said that he believes that political differences can be overcome in a constructive way underlining that: "I believe we can do this."

"Turkey is an important regional power and its historical destiny could well be to join the rest of Europe in the unique peace project that we are building under the banner of the European Union," he added.

From all these statements, it seems that the EU has remembered Turkey's strategic importance and the potential joint achievements of the two sides. But making them a reality depends on concrete steps to be taken by Brussels. And this is likely one of the last opportunities for the EU to convince Turkey of its sincerity.