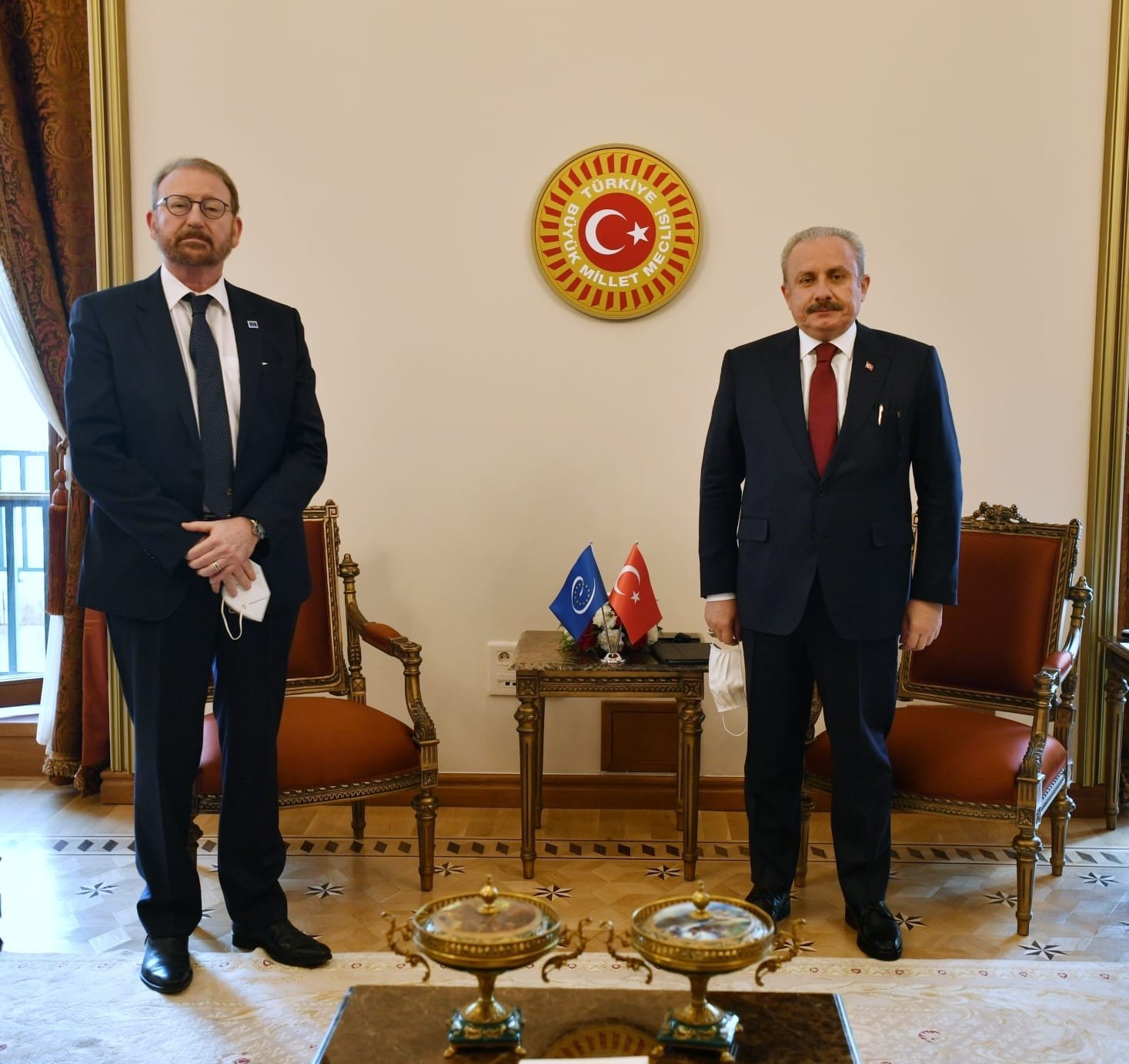 Rik Daems (L), the president of the Parliamentary Assembly of the Council of Europe, and Parliamentary Speaker Mustafa Şentop pose for a picture after their meeting in the capital Ankara, Turkey, March 30, 2021 (IHA Photo)
by Anadolu Agency
Mar 30, 2021 6:43 pm

"EU membership continues to be our strategic target. Strengthening and protecting Turkey's EU orientation will be in everyone's best interest," Mustafa Şentop said before his meeting in the capital Ankara with Rik Daems, the president of the Parliamentary Assembly of the Council of Europe.

Şentop said Turkey had recently accelerated its reforms towards EU membership and said the country had a "legitimate expectation that our reform efforts are also supported by the union."

Daems, for his part, said his Turkey visit was very important "because Turkey is one of the most important member countries of European Council."

Turkey applied for EU membership in 1987, with accession talks beginning in 2005.

However, negotiations stalled in 2007 due to the objections of the Greek Cypriot administration, as well as opposition from Germany and France.

But in December 2016, member countries announced that new chapters would not be opened.

Since then, Ankara has held many negotiations with bloc officials, insisting that Turkey wants to open Chapter 23 on the judiciary and fundamental rights and Chapter 24 on justice, freedom and security.

Meanwhile, the EU foreign policy chief called for the building of bridges between the bloc and Turkey.

"The EU has a strategic interest in the development of a cooperative and mutually beneficial relationship with Turkey," Josep Borrell wrote on his blog dedicated to EU foreign policy.

Referring to last year's tensions over the Eastern Mediterranean, Borrell said "the situation remains fragile, but the EU welcomes these forthcoming developments and gestures on the part of Turkey and has responded by extending its hand."

During a virtual summit, EU leaders last week discussed a report on the future of Turkish-EU relations, prepared by Borrell and the European Commission, and decided to continue negotiations on a constructive agenda.

According to Borrell, the economy is one of the most important areas of cooperation since Turkish exports to the EU total 69.8 billion euros ($81.8 billion) and the country receives 58.5 billion euros of its foreign direct investment (FDI) from EU countries.

At the same time, he acknowledged that the bloc and Turkey have tensions over four main questions – namely the Eastern Mediterranean, the Cyprus issue, regional conflicts such as Libya and Syria and democratic standards.

"The old disputes deeply affect security interests of the European Union and can no longer be considered just bilateral matters between Turkey and some member states," he argued.

Turkey has resisted efforts by Greece to turn the dispute with Turkey over maritime borders into a dispute with the EU.

He also said "democratic standards remain a key element, not just for the EU, but also for the people in Turkey."

It is time to overcome the differences in a constructive way, and "to build this bridge," Borrell suggested, adding: "I believe we can do this."

Implying the possibility of Turkey's EU accession, he said: "Turkey is an important regional power and its historical destiny could well be to join the rest of Europe in the unique peace project that we are building under the banner of the European Union."

Ursula von der Leyen and Charles Michel, the heads of the European Commission and European Council, will visit Turkey next Tuesday to discuss with Turkish President Recep Tayyip Erdogan the future of Turkish-EU ties.