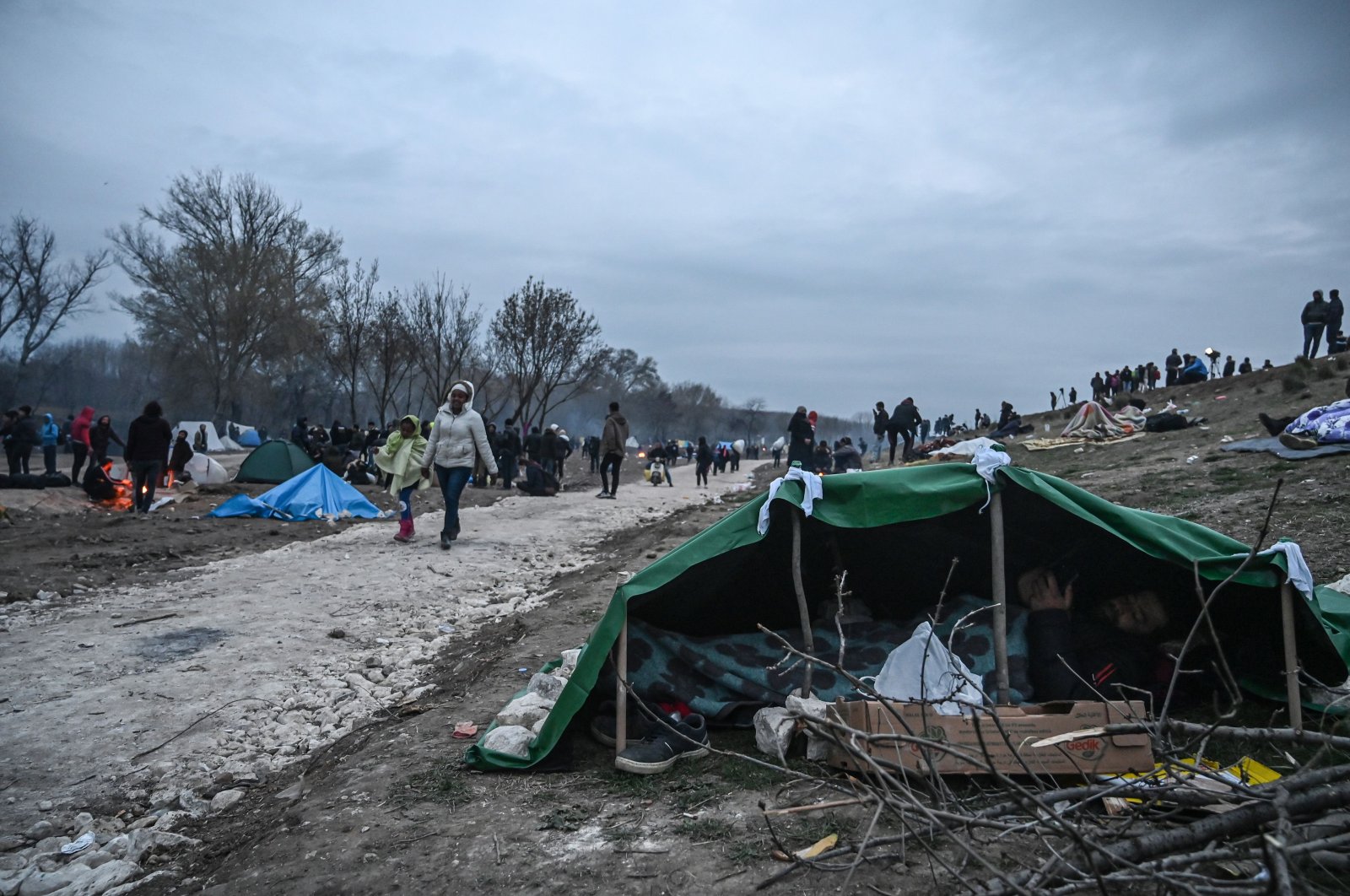 A migrant rests under a makeshift tent near the Tunca river as migrants and refugees wait to resume their efforts to enter Europe near the Pazarkule border gate in the city of Edirne, northwestern Turkey, Mar. 5, 2020. (AFP Photo)
by Eralp Yarar
Mar 09, 2020 3:27 pm

The validity of the current migrant deal between Turkey and the EU has been called into question following Ankara's new open-door policy. Experts say that the deal was killed when the EU failed to honor its commitments, and it is time to take responsibility for striking a revised agreement

While Turkey’s open-door policy has shifted the status-quo in the refugee crisis, experts say a revised migrant deal between Ankara and Brussels is necessary, underlining that the previous one is no longer effective due to the Europe Union’s failure to deliver on its commitments.

After repeated warnings that Ankara would not be able to take in another refugee wave, Turkey recently opened its borders to irregular migrants who want to cross into Europe. This decision was taken because of the lack of financial aid from the international community, the EU’s indifference to the Syrian crisis and the burden left solely on Turkey's shoulders to care for the refugees. As a result, the EU countries face the risk of a mass influx for the first time since 2016. This situation has triggered the question of whether the migration deal between the two is dead and a new revised agreement is necessary.

Emre Gönen, an academic from Istanbul Bilgi University, said that the EU had already ended the deal by not fulfilling its commitments.

Gönen said that the EU had until the end of 2018 to deliver its project-based financial commitments. “However, only half of the promised financial aid has been transferred so far,” he added.

Visa liberalization was expected also to become effective by the end of 2016, and there were some new chapters in Turkey’s accession process that were to be opened. However, the EU did not honor any of these commitments, Gönen stated.

“The amendments to the customs union were very critical. It was critical for the EU but vital for Turkey. However, these amendments were not applied. The EU took these decisions unilaterally,” he said.

Valeria Giannotta, an academic expert in Turkish politics and international relations, underlined a similar point, saying: “I believe that legally any agreement rests on the principle of ‘pacta sunt servanda’ (the deal has to be respected). When it comes to the Turkey-EU deal on immigrants, Turkey has fulfilled its commitment while the EU did not fulfill its pledged duties.”

In March 2016, Ankara and Brussels signed an agreement to reduce the number of migrants embarking on the dangerous Aegean Sea route and to find a solution for the influx of refugees heading to the EU countries.

According to the deal, Turkey was promised 6 billion euros ($6.77 billion) in financial aid, which was initially designed to be handed over in two stages and to be used by the Turkish government to finance projects for Syrian refugees. Visa freedom for Turkish citizens was also a perk of the agreement. Lastly, the customs union was to be updated.

In exchange for these promises, Turkey took responsibility for discouraging migration through the Aegean Sea by taking stricter measures against human traffickers and improving the conditions of Syrian refugees living in Turkey. Despite significant developments in the control of migration traffic, the EU did not deliver on its commitments stated in the deal.

“As a matter of fact, Turkey did what it subscribed to, to the extent that the main international organization acknowledges a dramatic drop in the number of refugees trying to cross the border toward Europe and Turkey has been considered as a champion of best practices for hosting immigrants. On the other side, unfortunately, not all the funds promised by the EU have been received by Turkey yet – 2 billion for investing in the ESNN (Emergency Social Safety Net) program while another 1.7 billion have been directed to some other programs. Therefore, out of 6 billion, just 3.7 billion were disbursed,” Giannotta explained.

The ESSN is a program that provides cash to the most vulnerable refugee families living in Turkey.

“Moreover, when it comes to the other points, the visa requirement for Turkish citizens has yet to be lifted. But not just that, the entire EU accession process did not see any improvement. The same chapters are still onstage of some vetoes (mainly related to Cyprus) and no new chapter has been opened. In addition, from the European institutions, there has been a growing negative approach toward Turkey to the extent that some EU representatives aimed to freeze the whole full-membership negotiation for Ankara,” she added.

Erdoğan in Brussels to revisit 2016 deal

President Recep Tayyip Erdoğan on Monday arrived in Brussels for a single-day official visit to meet with EU officials, discuss the latest situation on the refugee crisis and revisit the deal signed in 2016 between Turkey and the bloc.

The meeting comes at a critical time when the relations between Ankara and Brussels have been strained after Turkey’s decision to allow refugees and migrants who do not have the proper paperwork to cross through its borders to Europe.

Before the meeting, European Commission President Ursula von der Leyen said that Turkey must move refugees and migrants away from the Greek border.

"Finding a solution to this situation will require relieving the pressure that is put on the border," von der Leyen told a news conference on Monday.

Turkey currently hosts some 3.6 million Syrian refugees, more than any other country in the world. Ankara has so far spent $40 billion on the refugees, according to official figures. Ankara has frequently criticized the lack of financial and humanitarian support from the international community for refugees living in the country and has warned the European countries about new possibilities of migration waves.

As a response to the lack of humanitarian and financial aid from the international community, Erdoğan warned European countries that Turkey could not handle a new migration wave and will have to open the doors of its borders, allowing a refugee influx toward Europe.

The latest humanitarian crisis in northwestern Syria's Idlib caused by Assad regime attacks has forced nearly 1 million people to move near the Turkish border for refuge. As a result, Turkish officials announced last week that they would no longer try to stop migrants from reaching Europe. Since then, thousands of migrants and asylum seekers have flocked to the Turkish province of Edirne along the border with Greece and Bulgaria to make their way into Europe.

Commenting on Turkey’s recent policy change on allowing irregular migrants trying to cross the European border, Gönen said: “Turkey was faithful to its commitments stated in the deal so far. But, it switched its policy. The financial aid coming from the bloc is very important. If financial aid is stopped by the EU, this will be bad for Turkey and especially for refugees.”

Another point Giannotta stressed was the lack of financial and humanitarian aid for refugees from the international community.

“As a matter of fact, the deal was signed in 2016, but Turkey took the responsibility to host and allocate the refugees since the crisis in Syria erupted. It was in 2011 when the first group found shelter in Turkey. Nowadays, Turkey ranks as one of the first donors worldwide. Just think that around $40 billion have been allocated by Turkey on the refugee issue. Actually, in front of such a record, not just the EU but almost all of the international community failed,” she explained.

Considering the ongoing conflict in northern Syria, the resettlement of displaced refugees is still a hot topic. It seems that there are three options to choose from: First, as Turkey advocated, a safe zone to host more than 1 million refugees could be established in northern Syria under the protection of the international community.

In October, Turkey explained its planned model for a safe zone in northern Syria and asked for financial support from the international community, including the EU. However, EU lawmakers rejected Turkey's call for the safe zone.
According to Turkey's safe zone plan, 140 villages and 10 district centers will be established within a 30-40-kilometer-deep area in northern Syria, housing 5,000 and 30,000 inhabitants, respectively. The settlements will be provided with various facilities so that the people living there will be able to have a normal life with every necessity met. Each village within the area will have 1,000 houses, and each district will have 6,000 new homes built, making 200,000 new residences in total. The construction is expected to cost about $26.6 billion.

Second, the European countries could host new migration waves and share the burden or, third, Europe could provide more financial and humanitarian aid for refugees in Turkey under a revised deal to ease Ankara’s burden.

Considering all the factors and developments, Giannotta said that Turkey has the right to rescind the deal.

“However, there is room to renegotiate the terms and to discuss a new version of the agreement. This requires a shared assumption of responsibility,” she added.

About the possibility of a new migration deal between Ankara and Brussels, Gönen said: “A new deal may be necessary or the old one may continue. Speaking about a new deal would be speculation. The EU blamed Turkey’s lack of democratic and legal reforms for its failure to deliver commitments; however, the EU should have fulfilled its own responsibilities stated in the deal.”

On the other hand, Giannotta thinks that a new deal is definitely needed as the EU must take responsibility and leave its double standards behind.

“Unfortunately, this current EU is different than the one in 2016. New nationalistic and supremacist approaches emerged as well as some extreme feelings; there are economic problems and the member states tend to adopt more protective measures. The EU is living a profound identity crisis; it was not able to create political unity. Within the bloc, there is some jealousy, some dominant positions, some divergent interests. Unfortunately, all these factors impact policies,” she said.

“When it comes to refugees, it is a hot topic. The Dublin process got stalled, and in the current European account there is not even a single word related to 'immigration." Europe got stuck, as is visible in Greece. It is not able to proceed further on certain critical issues. It seems to be a victim of a diktat by some nationalist states. There are no tangible proposals. I am afraid that as a political project the EU failed. Understanding this, the EU needs to carry out an inner reflection and leave its hypocrisy to cope with a new refugee deal. However, I am expecting a new proposal based on some new funds and other promises similar to 2016, including the update of the customs union,” she explained.