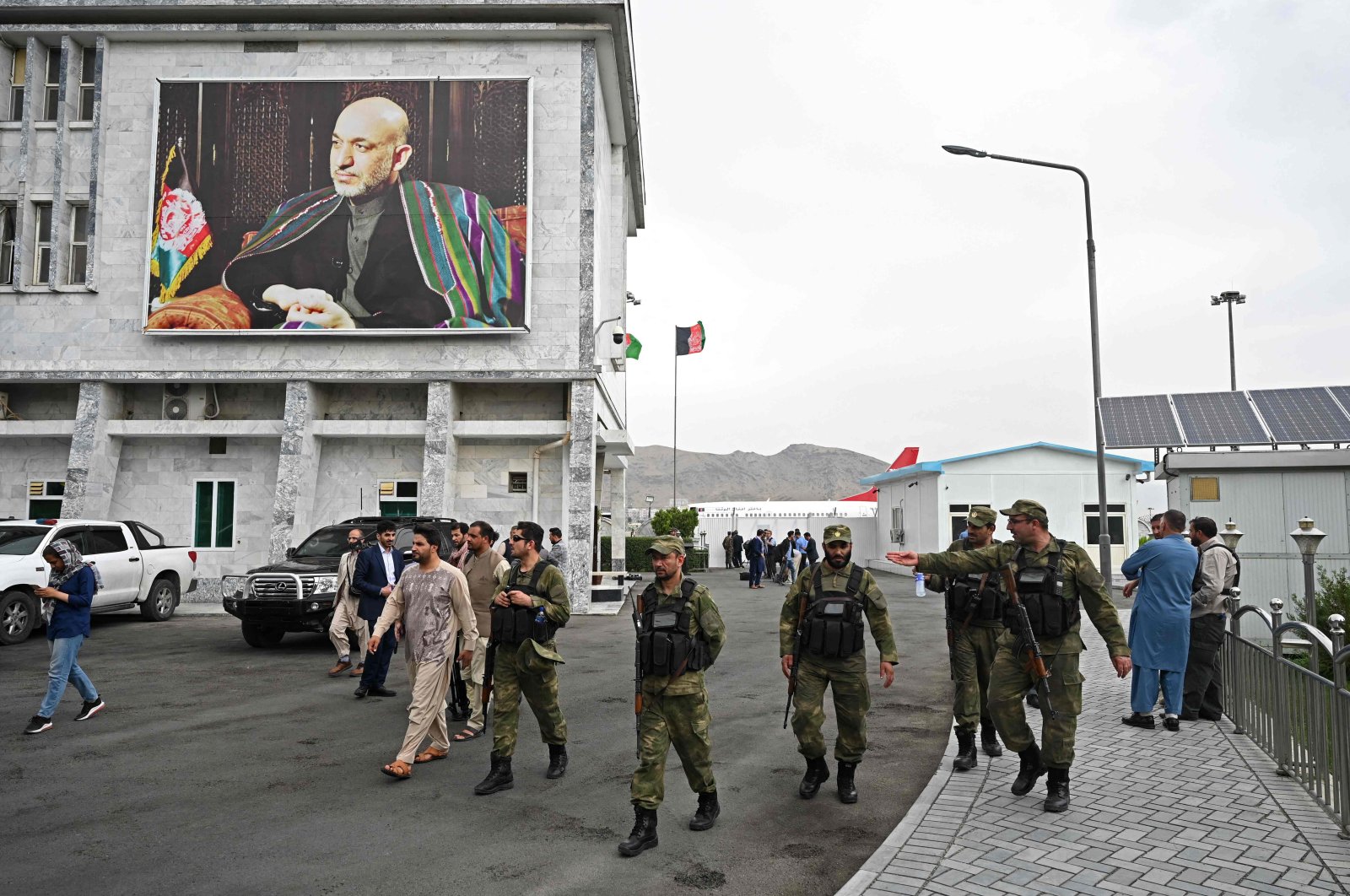 Amid the ongoing withdrawal of the United States-led NATO troops from Afghanistan, the question of how to secure and operate the capital Kabul's main airport that connects the war-torn country to the outside world remains. While Turkey has stepped up to claim the responsibility, experts say the possible mission offers both risks and opportunities for Ankara.

Accordingly, while Turkey can claim a bigger role in the future of Afghanistan and thus strengthen its regional power position, the mission can also positively impact Ankara's ties and cooperation with Washington and its status within the NATO bloc. On the other hand, analyses point out the security risks, particularly the risk of confronting the Taliban and other extremist elements.

Turkey, whose forces in Afghanistan have always been comprised of noncombatant troops, has offered to guard and run Kabul’s Hamid Karzai International Airport after the NATO troops’ withdrawal. Ankara has been holding talks with Washington on logistic and financial support for the mission, as questions remain on how security will be assured along major transport routes and at the airport.

The airport is vital to the stability of the country and serves as Afghanistan's gateway to the world, Hamoon Khelghat-Doost, an academic from Üsküdar University, told Daily Sabah and added that without an operating airport, it is impossible to imagine any foreign organization or embassy in Kabul being able to continue operating.

“The security environment in the country has increasingly become more fragile and Afghan national forces are not capable of securing this important entity. Therefore, there is a need for a stronger force to take care of the airport. Since all other NATO forces are evacuating Afghanistan, there will be Turkish forces to secure and run the airport in the absence of other foreign troops,” he explained.

When we look at the ongoing process of negotiations for a possible mission and its details, Turkish President Recep Tayyip Erdoğan recently stated that the United States and Turkey had agreed on the scope of the mission to secure the Kabul airport after the withdrawal of foreign troops.

While Erdoğan added that Turkey will receive intelligence support from Washington during the mission, Defense Minister Hulusi Akar stated that no more additional Turkish troops will be sent to Afghanistan.

“So, it means that both countries have agreed in principle to let Turkish forces take over the airport and its operation. For this to happen, Turkey should be given necessary diplomatic, financial and logistical support from NATO and the United States,” Khelghat-Doost said.

“Not many details of this mission have been publicly released. There is no clarity on whether Turkish troops would stay as part of another NATO mission, or on their own such as Turkey’s military presence in Libya, Syria and Iraq,” he added.

Kaan Kutlu Ataç, an academic from Mersin University, also highlighted Turkey’s demand for diplomatic, financial and logistical support from Washington, while American and Turkish authorities have still been conducting negotiations over the protection and operation of the airport.

“For the last six years, Turkey has gained experience regarding the responsibility of the operation of the airport. It wanted to use the experience after the announcement that the U.S. military presence will end completely as of Aug. 30. Erdoğan already announced that an agreement had been reached with the United States on what scope of the mission Turkey would undertake. Therefore, as of now, there is no conflict between the two countries regarding the security and operation of the Hamid Karzai airport if it is run by Turkey,” Ataç said.

“Here, the most important issue for Turkey will be to carry out the risk assessment that the Turkish soldier may encounter in a technical dimension based on a realistic perspective. Ultimately, however, Turkey's role will be a political decision,” he added.

A major question on the possible Turkish mission in Afghanistan following the withdrawal of the U.S.-led NATO troops is about Ankara’s motives and strategic goals.

“The relations between Turkey and Afghanistan have always been close, especially since the Bonn conference on the future of Afghanistan in 2001. Within the NATO framework, Turkish forces have been actively involved in securing Hamid Karzai International Airport in Kabul,” he said.

Khelghat-Doost noted that more than 500 Turkish troops are currently operating in Afghanistan as a part of a noncombat NATO mission. These Turkish troops are in charge of training Afghan military and police forces in different parts of the country. At the moment, several Turkish soldiers are also a part of the NATO forces securing the airport.

“As a Muslim member of NATO, Turkish forces have established a close and constructive relationship with different Afghan ethnicities, including the Taliban. This social capital has empowered Turkey to try claiming a bigger role in the future of Afghanistan,” he said.

“Turkey is recognized as an established and active regional power in several dimensions, including military, diplomacy, economy and culture. Having the leading role in the future of Afghanistan will certainly strengthen the regional power position of Ankara,” Khelghat-Doost added.

Both experts also highlighted that the Kabul airport mission offers both possible opportunities and risks for Turkey.

According to Khelghat-Doost, Turkey can utilize its current strategic position in the form of a deal.

“The Ankara-Washington ties have deteriorated over several issues in the Middle East and, most importantly, the purchase of a Russian S-400 anti-aircraft system capable of targeting various fighter aircraft. The U.S. has imposed sanctions on Turkey and even suspended the sale of state-of-the-art F-35 fighter jets to Turkey. By emphasizing its indispensable position in the future of Afghanistan, it is now the best time for Turkey to get U.S. approval on the S-400 case and to improve its relationships with the United States and the West in general,” he explained.

It is no secret that Turkish-American relations are at a historical low and that there have been difficulties in taking steps to solve the problems between the two capitals, Ataç said and added: “In this sense, it can be said that Turkey wants to go beyond the current intricate problems and create a common denominator through Afghanistan and initiate a ‘window of opportunity’ process. With this step, we will be able to see more clearly in time whether it will be possible to reread the highly complex issues on the Ankara-Washington axis through this opportunity.”

The efforts to protect the global prestige of a superpower that could not achieve its political and military goals in Afghanistan after the longest war in its history are important for Turkey, of a 70-year-old ally of Washington, Ataç further underlined.

On the other hand, Khelghat-Doost said that the risk of confronting the Taliban should not be ignored, as the Taliban has recently warned Turkey about the presence of its forces in Afghanistan following the foreign forces' withdrawal from the country.

“The Taliban views Turkey’s decision to stay back in Afghanistan as a violation of the 2020 deal for the foreign forces pullout. If both the Taliban and Ankara insist on their viewpoints, the risk of military confrontation between the two in Afghanistan cannot be ignored. Turkey should utilize all its diplomatic connections and capabilities to justify its presence in Afghanistan as a peacekeeper and not an occupying force,” he said.

Ataç, for his part, noted that Afghanistan has re-entered a period of toughening power struggles for the country, alongside a spiral of violence.

He said that if Turkey takes on this role, it may face two kinds of logistical problems: The first of these is the continuity of the logistics activities of Hamid Karzai International Airport, and the other is the transportation of diplomatic missions to the airport.

“The airport has been subject to occasional mortar attacks for some time. Due to the geographical location of the airport, the probability of attack during the final approach and departure of aircraft is quite high. For example, how to provide a certain technology, military ammunition, electricity, water and food safety are important issues for the continuation of operational activities related to flights.”

He also said that a possible migration wave will be a risk Turkey will face in addition to the political and military/security dimension of the situation.

“In this case, the security risk will not be limited to Afghanistan, and Turkey may have to cope with the threat of extremist elements within its borders.”

An agreement on the protection of the airport has become increasingly urgent as the final withdrawal of the remaining 2,500-3,500 U.S. troops and 76,000 allied NATO soldiers is near conclusion. The airfield had been the epicenter of the countrywide military operation to defeat the Taliban and hunt down the al-Qaida perpetrators of the 9/11 terrorist attacks on the United States.

This month, all U.S. and NATO forces left Bagram Air Base near Kabul – the command center of anti-Taliban operations – effectively wrapping up their exit after 20 years of military involvement that began in the wake of the Sept. 11 attacks.

The Taliban ruled Afghanistan until ousted by a U.S.-led coalition after the Sept. 11, 2001 terrorist attacks in America. In recent weeks Taliban fighters have overrun several districts in southern and northern Afghanistan, convincing government security forces to surrender and seizing their weapons and military vehicles.

The Taliban recently claimed to have taken control of more than 85% of Afghanistan, with government forces surrounding and abandoning outposts. The Afghan Defense Ministry, however, has rejected the Taliban's claims, asserting that hundreds of insurgents were killed during the retaking of fallen districts.