New Turkish Constitution a necessity, must be inclusive: Experts 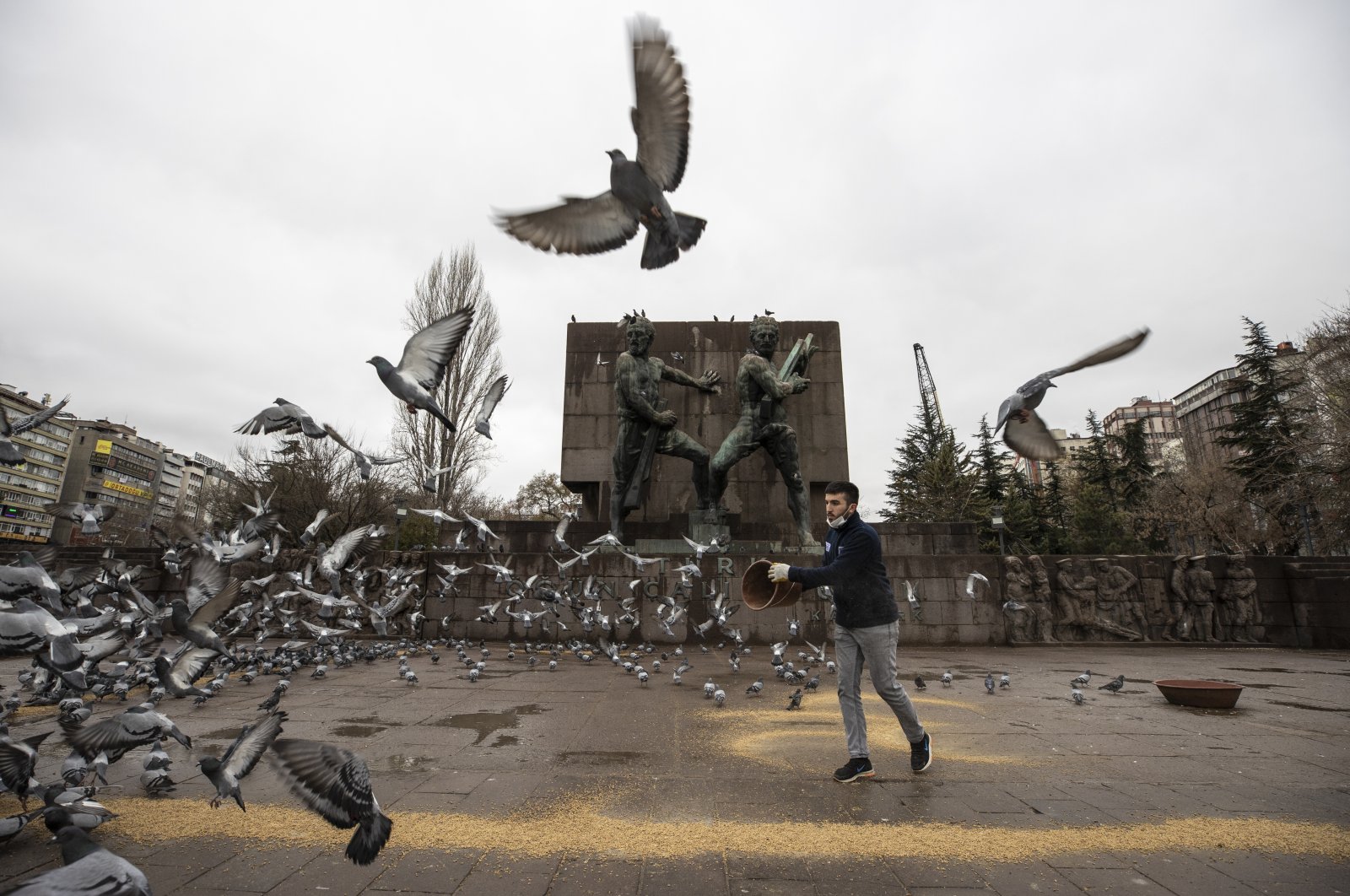 Stakeholders agree there is a need for new government guidelines and they stress the importance of including citizens from every segment of society in its preparation, urging leaders to create a unique, sustainable constitution

Ankara is lively these days with mentions of a new Consitution stirring the capital province, instantly occupying the country's political agenda.

While the ruling Justice and Development Party (AK Party) has long wanted to replace the existing 1982 Constitution, up until now it was never able to implement the change as other priorities would arise in domestic politics, which is why the welcomed news was a surprise to many. Despite the suddenness of the announcement, experts agree that it is a necessity for Turkey to have a new, civilian constitution that is welcoming in nature to all segments of society.

Calling the Constitution a social contract, Mehmet Gün, a lawyer and the head of the Better Justice Association, said: "Turkey definitely needs a new Constitution. However, this, alone, is not enough. This is a matter of how can we have a better judicial system. Having a proper Constitution is one of the most crucial parts of it."

"Yet," he said, "If this will be a proper contract, we all need to have a saying in this."

Gün stated that one of the main components of democratization is the feeling of judicial security and providing this would achieve a third of what the Constitution set out to do.

Earlier this week, President Recep Tayyip Erdoğan said that it is time to discuss drafting a new Constitution, underlining that the AK Party and its ally in the People's Alliance, the Nationalist Movement Party (MHP), have agreed on the plan. Highlighting that the changes to the Constitution must be done in a transparent manner, Erdoğan said the final version will be presented for public discretion.

"It is clear that Turkey is in need of a brand new Constitution," Ferhat Küçük, an expert on constitutional law and lawyer at the Istanbul Bar Association, also said and added: "The previous constitutions, including the current one, are remedies of coups. Today, Turkey needs a civil constitution."

One day after Erdoğan’s call, the MHP pledged to support the plans to draft a new Constitution, a statement by the party leader said. MHP Chairperson Devlet Bahçeli said in a written statement that Turkey is "obligated" to replace its current Constitution. Reasserting his party's commitment to its alliance with the AK Party, Bahçeli underlined in his statement that the country's Constitution in its present form was the "product of extraordinary conditions."

Reiterating his call, Erdoğan on Wednesday said the doors are open for all political parties to contribute to constitutional reform, as he welcomed Bahçeli's support for the initiative. The president continued by saying that the ruling party would like to see all who wish to contribute to the process, rather than sabotaging it, taking an active role in the revision process. Erdoğan argued that replacing the existing Constitution with a civilian one would broaden Turkey's horizons and contribute to the country's existing achievements. Erdoğan also held a meeting with Bahçeli on Thursday in which the two discussed multiple topics, including the constitutional change.

In Küçük's opinion, in order for the Constitution to be successful, having discussions with opposition parties is a must. "Otherwise, you would face legitimacy problems in the future," he warned.

However, for Küçük, discussions with political parties are alone not enough.

"It is very important to ask citizens and opinion leaders what are their expectations from a new Constitution. Universities and university professors should also definitely be consulted during the process," he underscored.

Talk of a new Constitution came amid the government's new democratic reform initiative. The president referred to 2021 as the “year of reforms” and pledged that his party would overhaul the economy and judiciary. Turkey's current Constitution was drafted following the Sept. 12, 1980, coup d'etat and it still features elements of putschist influence despite a number of amendments having been made to subdue it.

Erdoğan wants Turkey to have a civilian-drafted Constitution by 2023, coinciding with the centenary of the foundation of the Republic of Turkey. In doing so, the president will also test whether the opposition has been sincere in its calls for democratization and refining the Constitution, revealing their true stance on the matter.

Despite initially opposing renewing the Constitution, the parties did not refrain from intensifying political contacts with one another. On Thursday, CHP Chairperson Kemal Kılıçdaroğlu visited conservative Felicity Party’s (SP) leader Temel Karamollaoğlu.

Speaking after the meeting at a joint press conference, Karamollaoğlu said that his party has been working on a draft Constitution and it will be ready next week.

Kılıçdaroğlu, for his part, said: “There is a serious polarization in the politics. We need to overcome this polarization. Mr. Erdoğan started a Constitution debate. For starting such a debate, first, you should follow the existing Constitution."

“There is an urgent need for democratization and return to the rule of law,” Sancar said following the visit, underlining the dangers of increasing tensions and polarization within society. After their visit to Şentop, the HDP co-chair also visited the SP. The party plans to continue to the political tour and will visit opposition parties including the CHP, the Future Party (GP), and the Democracy and Progress Party (DEVA).

Meanwhile, the head of DEVA, Ali Babacan, and the head of the IP, Meral Akşener, also had a meeting on Thursday. In a joint press conference following the meeting, the two leaders criticized the call for a new Constitution.

"Erdoğan mentioned this but there are no preparations in the background for such a move to be taken," Akşener said. Babacan, on the other hand, asked: "Why would you try to change a Constitution that you already do not commit to?"

The 2017 constitutional referendum asked voters to decide on an 18-article bill switching from a parliamentary to a presidential system, among other changes. The amendments to the Constitution were jointly brought forward by the AK Party and the MHP. Over 51% of people voted in favor of the changes.

The CHP had advocated against the change in the run-up to the referendum, and Kılıçdaroğlu and Akşener had vowed to bring back the parliamentary system in their election campaigns if they won.

Dismissing speculation about switching to the parliamentary system, Erdoğan said the new Constitution would be formed in line with the presidential system of government, which was approved in a referendum.

According to Küçük, the 1921 Constitution can provide insight into the kind of Constitution Turkey currently needs.

"1921 Constitution consists of 24 articles, and 14 of them are related to the local administrations. It is a Constitution that is prepared with the purpose of having a Constitution that would last for a long time," he said. He explained that the mechanism of government is referred to as a "frame constitution" and defined as a compact collection of the principles central to the country with as few articles as possible, making it a system all echelons of society can unite around.

"The lesser the articles, the better. It is being said that a Constitution needs only the two sides of the coin: one of which is the regulations over state and institutions, while the other one is individual rights and liberties. As long as a Constitution has these points covered, there is nothing more to add to it," Küçük expressed, explaining that the more articles there are, the more there is to disagree over, which would complicate the process.

"Since we are a society with many different groups, it is crucial and quite difficult to come up with a Constitution that would please everyone. If the Constitution would consist of only the basic principles, then it would last longer without causing divisions within the society," he expressed. Küçük also added that broader subjects can be regulated by laws that can be determined later on.

Gün, on the other hand, finds the notion of basing a new Constitution on a preexisting one absurd.

Pointing to the political and social changes that have taken place around the world over the past century, Gün highlighted the importance of incorporating the lessons learned over the course of history into the new Constitution.

"Turkey needs a unique Constitution that is based on its own experiences and needs. However, the right circumstances should be established first," he said.