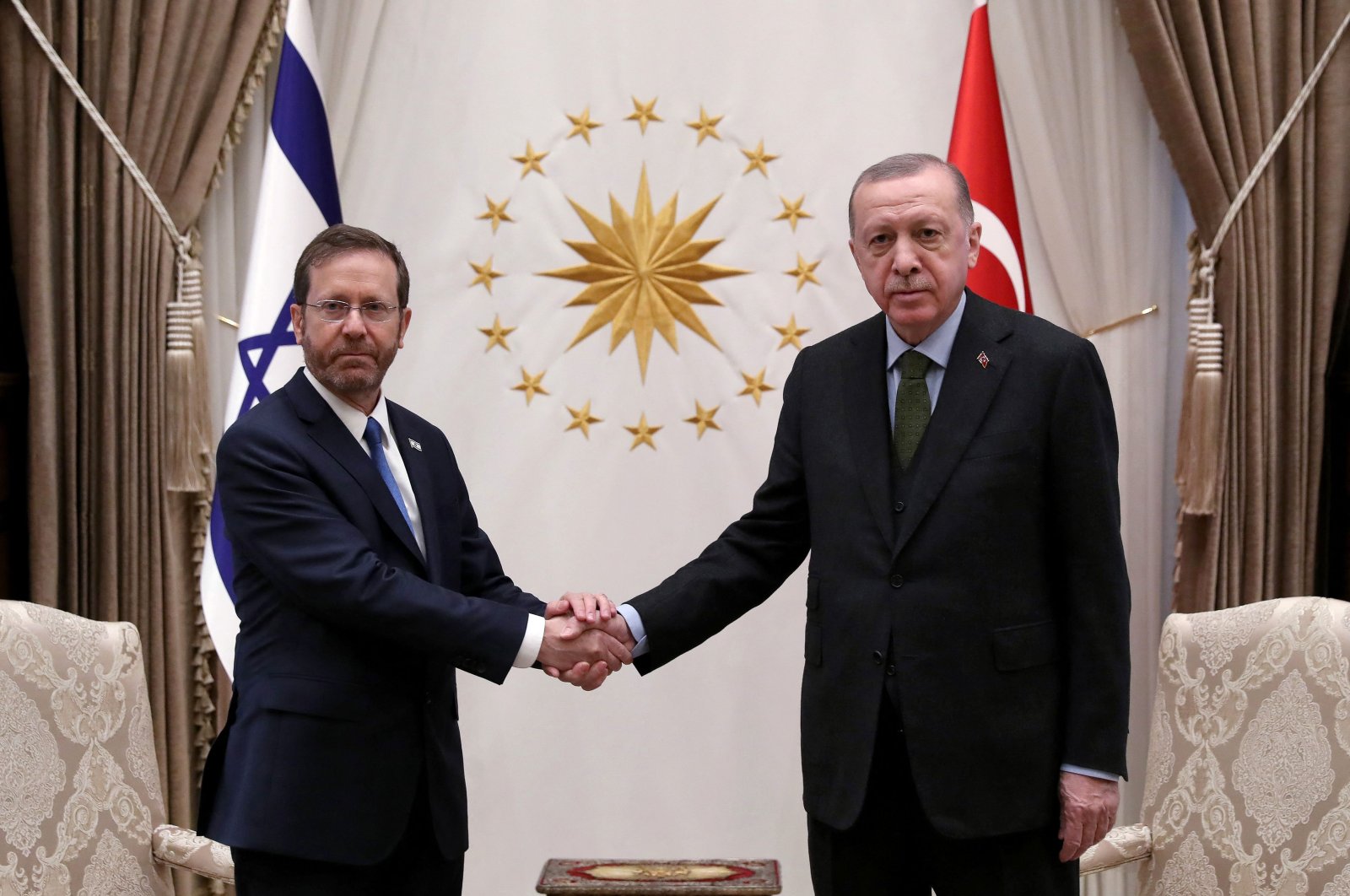 President Recep Tayyip Erdoğan shakes hands with Israel's President Isaac Herzog during an official ceremony at the Presidential Complex in the capital Ankara, Turkey, March 9, 2022. (AFP Photo)
by Eralp Yarar May 04, 2022 10:00 am

The new chapter in bilateral relations between Turkey and Israel opens the door for cooperation in many areas from energy to security as well as contributing to stability in the region, experts said while noting certain expectations and demands of the two sides from each other from a realist geopolitical perspective in which every international actor tries to maximize their interests.

In recent months, the two regional powers have sought a rapprochement after nearly a decade of fractured ties, while Turkey has recently been working to improve relations with several countries in the Gulf and Middle East regions, including Saudi Arabia, Egypt and the United Arab Emirates (UAE), as part of a normalization process launched in 2020.

Karel Valansi, a columnist with a weekly Turkish-Jewish newspaper Şalom, described the recent developments as “a new chapter in bilateral relations,” saying that there are many common interests and several issues that could benefit from the cooperation of Turkey and Israel.

"Following (Foreign Minister Mevlüt) Çavuşoğlu’s visit to Israel in May, we can expect to have the ambassadors back. I believe we can also expect a rise in trade volume," she said.

According to Valansi, restarting a dialogue that seeks areas of cooperation could be the first step. "Also, cultural exchanges and friendly sports tournaments could help change public opinion in both countries. Academic and civil-society engagement could also help strengthen bilateral ties," she added.

Political Analyst and Researcher Gökhan Çınkara also underlined that Çavuşoğlu’s scheduled visit to Israel later this month will be the most important meeting for the bilateral diplomatic relations to turn to their normal route.

"This visit will also include a technical review opportunity to resolve disputes between Israel and Turkey. Considering that Israeli Foreign Minister Yair Lapid is a powerful political figure, we can say that the steps to be taken in bilateral relations will also be the product of a consensus in Israel's central politics," he said.

Çavuşoğlu announced he will visit Israel on May 24 amid increasing efforts between the regional rivals to mend ties, four years after they expelled ambassadors. The top Turkish diplomat said he will travel to Israel and Palestine with Energy Minister Fatih Dönmez on May 24 and would discuss the appointment of ambassadors with his Israeli counterpart during the visit. Energy cooperation is expected to be another topic on the agenda.

Turkey and Israel have in recent months been working to mend their long-strained ties, and energy has emerged as a potential area of cooperation. President Recep Tayyip Erdoğan said last month he was "very, very hopeful" for energy cooperation with Israel, and he hoped to discuss the issue with Israeli Prime Minister Naftali Bennett.

The two countries could work together to bring Israeli natural gas to Europe, reviving an idea first discussed more than 20 years ago. Plans for a subsea pipeline from the Eastern Mediterranean to Europe, excluding Turkey, have stalled after the United States expressed its misgivings in January.

Following the crisis in its relations with Turkey during the last decade, Israel created a strategic alliance with Greece and the Greek Cypriot administration, two actors with long-standing acrimony toward Turkey, and in recent years held regular trilateral meetings and conducted joint military drills.

The trio was part of the East Mediterranean Gas Forum established in 2019 with other states, including Egypt and Jordan – without Turkey.

In 2020, Israel, Greece and the Greek Cypriot administration signed the EastMed deal for a pipeline to ship gas from the Eastern Mediterranean to Europe, triggering objections from Ankara.

The U.S. has since also raised concern about the project, citing possible issues over its "commercial viability."

Turkey’s view is that any project that aims to sideline the rights of Turkey and the Turkish Republic of Northern Cyprus (TRNC) in the Eastern Mediterranean will be unsuccessful.

"As for the energy issue, confidence-building measures are essential. Building back partnership requires time and commitment. During his visit to Turkey, (Israeli President Isaac) Herzog expressed hope that Ankara would once again become a reliable partner that engages in a cooperative, predictable relationship with Israel," Valansi explained.

Speaking on the normalization steps and possible cooperation on energy, Çavuşoğlu recently said: "We have been defending fair sharing and cooperation in the Eastern Mediterranean since the beginning. Countries that did not approach this cooperation turned to various polarizations, initiatives that excluded Turkey, and blocs were formed. But we have since seen that none of these were practical."

He reiterated that Erdoğan proposed an Eastern Mediterranean conference to the European Union and said that this proposal has gained importance.

"Everyone saw that the EastMed is not a feasible project. As the war continues, everybody wants to diversify its energy resources," he said, adding that Turkey is also seeking such steps.

“We see that Israel has rich reserves. In order for these to reach the International and European market, the most economical itinerary is through Turkey.”

"Since the security bureaucracy in Israel is a consulted actor in the foreign policy processes, it should be expected that the problems between the two countries in the field of security will be eliminated and then the areas of cooperation in this field will be increased," Çınkara also said touching upon the security aspect of the process.

According to Çınkara, the effect of this new situation on regional security is that it will reinforce new coordination areas in the region.

“In short, this is the new diplomatic initiative created by the Abraham Accords and the efforts to create security cooperation created by it. At least, it can be said that Turkey is trying to develop a foreign policy discourse compatible with the new regional dynamics in the Gulf.”

The Abraham Accords are a joint statement between Israel, the United Arab Emirates (UAE) and the United States, reached on Aug. 13, 2020. Subsequently, the term was used to refer collectively to agreements between Israel and the UAE and Bahrain. The statement marked the first public normalization of relations between an Arab country and Israel since that of Jordan in 1994.

Expressing his appreciation for Herzog's visit to Turkey, Erdoğan said strengthening the ties with Israel is of great importance for regional stability and peace as well as for the two countries.

Herzog, for his part, said the aim is to lay the foundations for the development of friendly relations between Turkey, Israel, and the peoples of the two countries.

"Israel and Turkey can and should engage in a cooperation that will impact this region we all call home," Herzog said.

Herzog visited Turkey in March to meet Erdoğan, the first visit by an Israeli head of state since 2007, as the countries seek to mend fractured ties.

Regarding the two countries’ objectives, demands and expectations from the reconciliation process, Çınkara said that the most important point must be the foreign policy goals that the two countries have difficulty realizing on their own.

"For Turkey, this means not staying out of the new regional alliance system formed in the Middle East and turning to a common understanding with the U.S. again. For Israel, it is the containment of Iran and the fortification of the Abraham Accords with a regional power. Considering that the two countries have similar security concerns, it would not be a surprise to expect cooperation in this respect to accelerate at the point of creating an anti-Iranian security perimeter."

Ending a decade of political unease with a major regional power is very important for Israel, Valansi also said as she underlined that Turkey has an important place in the Israeli mind.

Another reason is the presence of Hamas in Turkey, Valansi said, adding: "In recent years, Israel has intensified its diplomatic and security campaigns against Hamas, while Turkey has hosted several senior Hamas members over the years. Israel has been calling for many years on Turkey to close Hamas offices."

Valansi also once again underlined the importance of the natural gas issue. Accordingly, the EastMed gas forum turned into a regional organization, and the forum includes many countries of the Mediterranean, excluding Turkey, Valansi said, adding: "I believe Turkey is trying to become part of this project because the establishment of this organization is a significant historical development with the possibility of peace and cooperation in a tense region."

"Additionally, there is the prospect of sending Israeli natural gas to Europe via Turkey’s pipelines. Turkey always wanted to be an energy hub and doesn't want to lose it to Egypt or Greece," she added.

Another important point in bilateral relations is the Palestinian issue. Ankara, which supports a two-state solution to the Israeli-Palestinian conflict, has condemned Israel's occupation of the West Bank and its policy toward Palestinians, while Israel has called on Turkey to drop support for the Palestinian resistance group Hamas, which runs Gaza.

During the recent process, Turkey has said it believes a rapprochement with Israel will also help find a solution to the issue, but that it would not abandon commitments to Palestinians for better ties with Israel and last month condemned the use of force against Palestinians by Israeli security forces and urged for a comprehensive investigation to bring the perpetrators to justice.

Erdoğan also told his Israeli counterpart Herzog that he was "very upset" by the Palestinians killed and injured in the West Bank and Al-Aqsa Mosque during the Islamic holy month of Ramadan.

Çınkara underlined that there had been no progress in the two-state solution since the Oslo Accords.

“The obstructions of the actors in Palestine at the point of building a national leadership and the successive right governments in Israel hinder this process.”

One possibility is that Turkey's historical depth on the two peoples can be perceived as a positive attempt to restart this process, he said adding: “However, this process implies a situation that goes beyond the influence of Turkey's foreign policy instruments.”

The Oslo Accords are a pair of agreements between Israel and the Palestine Liberation Organization (PLO): The Oslo I Accord, signed in Washington, D.C., in 1993; and the Oslo II Accord, signed in Taba, Egypt, in 1995. They marked the start of the Oslo process, a peace process aimed at achieving a peace treaty based on Resolution 242 and Resolution 338 of the United Nations Security Council, and fulfilling the "right of the Palestinian people to self-determination."

The Oslo process began after secret negotiations in Oslo, resulting in both the recognition of Israel by the PLO and the recognition by Israel of the PLO as the representative of the Palestinian people and as a partner in bilateral negotiations. Among the notable outcomes of the Oslo Accords was the creation of the Palestinian National Authority, which was tasked with the responsibility of conducting limited Palestinian self-governance over parts of the West Bank and the Gaza Strip; and the international acknowledgment of the PLO as Israel's partner in permanent-status negotiations about any remaining issues revolving around the Israeli-Palestinian conflict.

According to Valansi, the Palestinian factor can always disrupt bilateral relations.

“I believe Herzog and Erdoğan decided to ‘agree to disagree’ during Herzog’s visit. That means that they may have different opinions or disagreements,” she said.

That is not a problem as long as they continue the dialogue and solve the disagreements with mutual respect and goodwill through institutions, Valansi said adding: "I believe the first test on this issue has passed relatively well as both parties preferred dialogue."