Turkey will not allow the abuse of its humanitarian policies 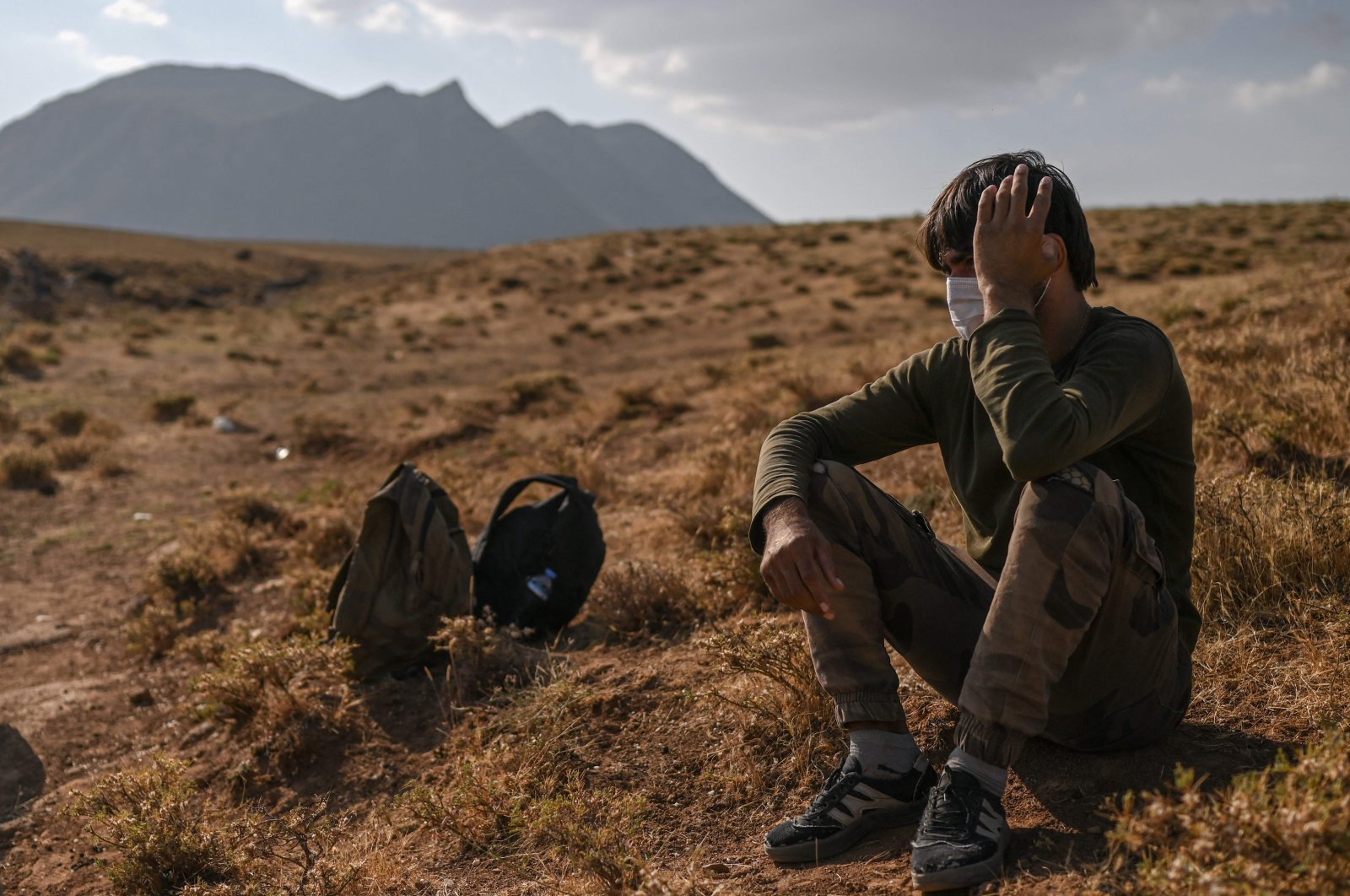 An Afghan migrant rests while waiting for transport by smugglers after crossing the Iran-Turkish border on August 15, 2021 in Tatvan, on the western shores of Lake Van, eastern Turkey. (AFP Photo)
by Nur Özkan Erbay Sep 16, 2021 1:16 pm
RECOMMENDED

President Recep Tayyip Erdoğan and his German counterpart, Frank-Walter Steinmeier, recently spoke over the phone on the subject of Turkish-German relations, as well as the issue of migration. Especially in light of the recent developments in Afghanistan, Turkey is determined to draw the world's attention to the issue of migration on every possible occasion. Thus, Erdoğan's speech at the United Nations General Assembly in New York next week will again be on the subject of irregular migration caused by the destruction in Syria and Afghanistan.

Addressing the issue of delivering the necessary humanitarian aid to Afghanistan via the U.N. and other aid agencies during his phone conversation with Steinmeier, Erdoğan said that no one wanted to experience a similar wave of Syrian migrants as in 2015 and that Germany and the European Union should provide support to neighboring countries that bear the burden of Afghan migration in this regard.

Erdoğan also noted that some European countries have reduced the issue to only border security, stressing that Turkey does not have the capacity to handle a new migration burden.

Foreign Minister Mevlüt Çavuşoğlu made the same points in his speeches during the week. These concerns, which were also conveyed to U.N. High Commissioner for Refugees Filipo Grandi, who was in Turkey recently, are extremely vital for Ankara, especially since Turkey is one of the first stops for those fleeing wars and violence in Syria and Afghanistan.

Noting that the situations in Syria and Afghanistan are similar, Çavuşoğlu said that it is unrealistic to build a new country while a war is ongoing, and it is impossible to send people back immediately because of the current situation in Afghanistan. On the other hand, Çavuşoğlu also emphasized the fact that Turkey, which already hosts the largest number of Syrians in the world outside the territory of Syria, cannot take responsibility for a new wave of forced migration alone. "We see that this is a problem in Turkey, there is also a disturbance in the society,” he pointed out.

Turkey believes that this problem is a global issue and can only be solved with the determination and sensitivity of countries equally. That is why Ankara believes that this issue should not be treated only as a security problem. In this sense, Çavuşoğlu also elaborated on Turkey’s stance. “If this is a global problem, we as the international community should work together to solve this problem. It is also not right to look at this only from a security point of view. It is extremely wrong to look at it with a racist and fascist approach. On the other hand, if it is a social problem, it is necessary to solve it by calmly evaluating it all together and producing new policies," he added.

Meanwhile, this is not the first time Turkey has issued these warnings and statements. In fact, it is one of the few countries that is trying to keep these issues on the agenda of the world. Turkey's reaction at first was extremely clear in the face of the U.S. withdrawal from Afghanistan and to the images distributed by the media after it: Afghans clinging to the propellers of airplanes and trying to escape from Afghanistan, sightings of airfields and crowds formed on the borders, etc.

"Turkey does not have any obligation whatsoever to be a safe haven for Afghan refugees," Erdoğan said on Aug. 19, as the Taliban solidified their grasp on Afghanistan, prompting a refugee wave. Addressing the public concerns regarding a possible refugee wave, the president also said that Turkey would ensure the refugees' safe return.

Çavuşoğlu also noted that Turkey has sufficiently fulfilled its humanitarian and ethical duties regarding migration and cannot take the burden of an additional migrant wave from Afghanistan on Aug. 29 during his joint news conference with his German counterpart Heiko Maas in Turkey's southern Antalya province.

In the meantime, in the midst of all these discussions, it is necessary to recall the figures that paint a picture of the migration burden that Turkey is currently undertaking. According to the figures of the International Organization for Migration (IOM) on Turkey, the number of migrants and refugees residing in Turkey is almost 4 million, of which 90% are Syrians. According to the figures of the General Directorate of Turkish Migration Administration (GIB) on Aug. 12, 2021, 29,118 Afghans arrived in Turkey this year through irregular migration. This number was 201,000 in 2019 and 501,616 in 2020.

On Aug. 20, Erdoğan said that there are 300,000 unregistered Afghan migrants currently residing in Turkey. He also said: “All the preventative walls we are building are meant to prevent irregular migration. If necessary, we can hold talks with the Taliban. If they knock on our door, we can talk if it is needed. But there’s a truth. We are not in a position to close the door to the people of Afghanistan."

Erdoğan stressed that the preventative walls being built are all to stop irregular migration into the country, noting that there has already been a serious migration flow from Syria to Turkey consisting of about 4 million people.

"We have always opened our doors to people who have definitely fled or are taking refuge in our country, and we have sent back those who need to be sent back to their countries by checking them at the return centers," Erdogan added.

Meanwhile, concerns have risen over a possible spike in refugees from Afghanistan due to the U.S. pulling out of the country after two decades. Video footage has shown large groups of refugees in the area near the border with Iran, though the Turkish government says that there has not been a surge in numbers.

Defense Minister Hulusi Akar praised the efforts of security forces controlling the borders and said that Turkey has taken all necessary measures, during an interview with Daily Sabah on Aug. 21.

“We have taken physical measures. There are trenches that are 4 meters (13 feet) deep and 4 meters wide, modular walls, pits behind them and wires. Some 587 people have been caught trying to cross through the Iran border since Jan. 1, 2021 – this means around two people a day,” Akar said, refuting claims that 50-60 people pass into Turkey daily.

He added that the claims of tens of thousands of migrants crossing into Turkey do not reflect the truth. Akar said that a factory that casts molds and quickly manufactures walls was established close to the border. The wall construction on the entirety of the Iran border is now 65% complete.

“We do not see big crowds and movements at the borders,” he reiterated.

Work to dig trenching, as well as the construction of the modular wall and high-tech observation towers to prevent illegal activity, is underway on the Turkish-Iranian border. While nine Turkish battalions have been serving at 44 posts to ensure security, a battalion, two expeditions and five divisions have been deployed in the region along with 35 task forces and 750 special operations police officers in armored vehicles. Drones and helicopters are also used by security forces to keep the region under control.

Turkey is not a pit stop for migrants, Erdoğan said recently, adding that the country is taking the necessary steps to avert an irregular migration crisis due to the situation in Afghanistan.

In particular, Turkey has never closed its doors to irregular migrants who have left their countries mainly for economic reasons over the past 30 years, as well as forced migrants who have fled war and violence in countries such as Iraq, Afghanistan and Syria.

However, after that, Turkey cannot be expected to take on the responsibility by itself when the countries that are primarily responsible for these wars, both on a regional and global scale, have not stepped up to help. On the other hand, taking into account the statements of Erdoğan and government officials, Turkey has never approached the issue as only a security problem by implementing racist and inhumane policies. However, it is also obvious that this situation is a burden that can no longer be carried by Turkey alone. That is why Turkey is determined not to allow anyone to abuse the sacrifices and efforts it has made so far. That is why Turkey will reiterate its calls and pressure on the international community to rebuild Syria and Afghanistan as soon as possible. Turkey will do this not only for itself, but also for the Syrians, Afghans and other nations whose countries are occupied in the interests of other countries, and war is almost destined to happen.