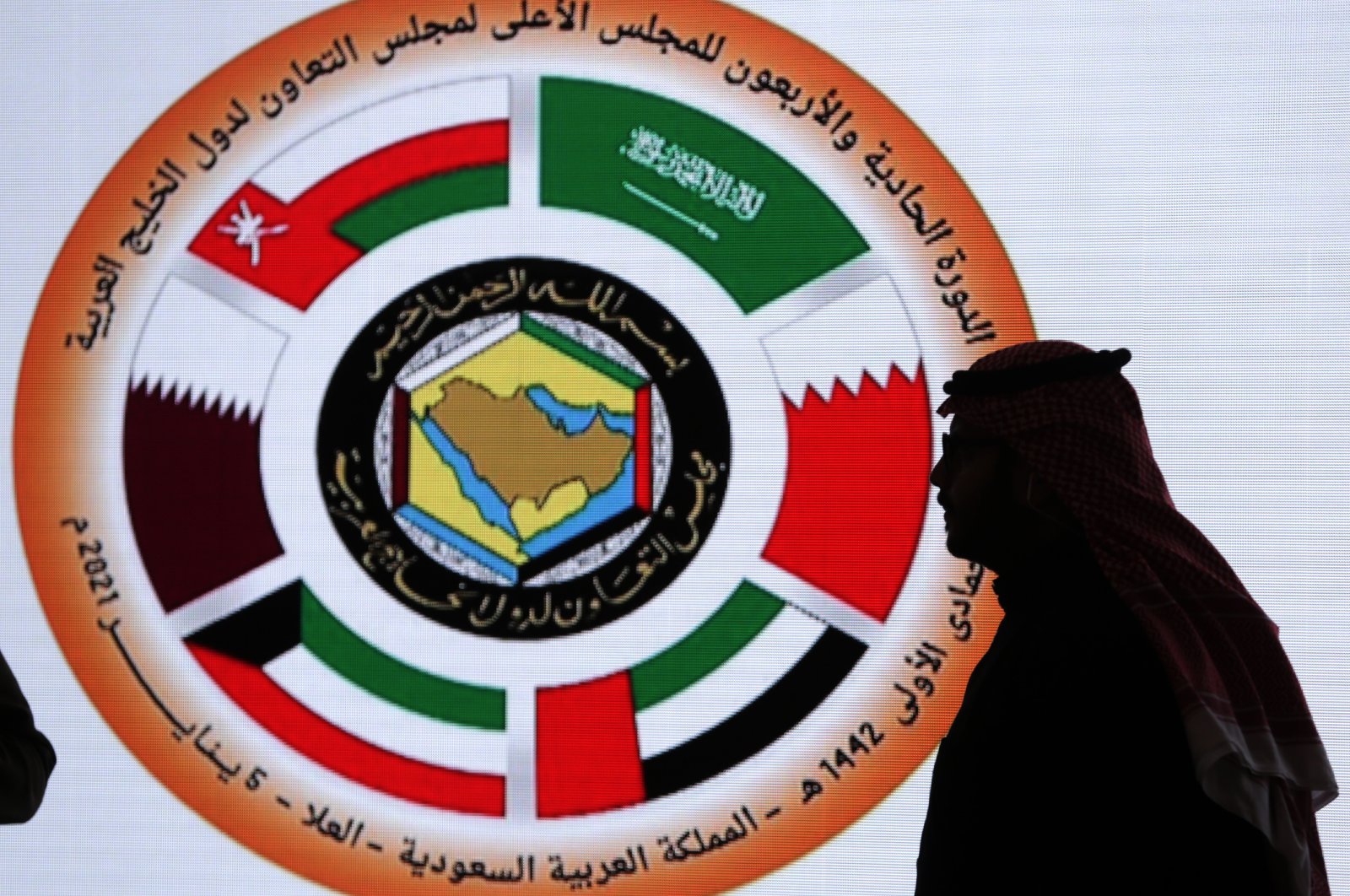 Positive signals from the Arab Gulf in the early days of the new year resulted in the lifting of the blockade imposed on Qatar three and a half years later. The decision to lift the blockade, which was initiated by the United Arab Emirates (UAE), Saudi Arabia, Egypt and Bahrain back in June 2017, was announced to the world on Jan. 5 by the Gulf Cooperation Council (GCC).

As a result of the decision, these countries reopened their land borders and their airspace to Doha. In the days following this decision, the UAE’s foreign minister's proposal for normalization with Turkey, which was perhaps not a surprise for Ankara, still echoes. So, what has changed for these countries, which placed Turkey and Qatar on the axis of evil in the last four years?

What is certain is that the timing of the UAE, Egypt, Saudi Arabia and Bahrain makes a lot of sense in the point of view of the political table that formed after the eventful elections in the U.S. In fact, just before the end of U.S. President Donald Trump’s term, these countries now face the danger of being dismissed from the alliance with Washington in President-elect Joe Biden's era. They are almost acting as if they did not impose the 13-point articles of invasion and blockade on Qatar themselves.

Now, there are a lot of indicators suggesting that this alliance extending an olive branch to Qatar is situational. It is not certain whether Biden will maintain the same kind of relationship with the Gulf countries, which has so far urged them to sign huge arm deals with the U.S. and guaranteed Israel's security as the biggest U.S. ally in the region. In fact, he will not impose sanctions on these countries in exchange for them, which is what Trump's policy was basically built on.

More evidence of the Gulf’s threat perceptions from the new era is the possibility of an Arab Spring 2.0 since these countries spent almost five years in unease with the start of the Arab Spring in 2011, during the Obama-Biden era. That's why they are afraid of another deja vu. Therefore, human rights violations both inside these countries, where many implicit and explicit attacks have been designed, especially in Turkey and Qatar, and in other countries such as Yemen, operations against dissidents will not be easily solved. Extended military and political relations with Russia will also not be as easy as they have been in the last four years. The Biden administration will certainly use the instruments of soft power over the Gulf states to the fullest.

On the other hand, at the same time during the days of the blockade on Qatar, the Gulf quartet created an artificial perception of threat over the close relations between Qatar and Turkey, which created an excuse for them to pursue their interests and aggressive policies. They intended to delegitimize the relations between Ankara and Doha by intensifying their perceptional-propaganda activities through Turkey and Qatar's policy toward Hamas and the Muslim Brotherhood. During this process, they also created a threat against Turkish military bases in Qatar, and also targeted the fact that Qatar and Turkey support the same sides in countries where civil wars are ongoing, such as Libya and Syria.

Now after an olive branch was extended to Qatar, Abu Dhabi seems to be in a rush to send a positive message to Turkey, perhaps the policymakers of the UAE think that time is running out. "We want to normalize our relations within the framework of mutual respect for sovereignty with Turkey," Anwar Gargash, the minister of state for foreign affairs of the UAE told Sky News Arabia on Sunday night, noting that there are no grounds for problems between the two countries and that the UAE is Turkey's No. 1 trade partner in the Middle East. "We don't cherish any feuds with Turkey," he added, also claiming that Ankara should end its "support to the Muslim Brotherhood and restore its relations" with the Arab world.

Following the lifting of the blockade on Qatar, Gargash's messages to Turkey, which did not surprise Ankara, came after the changing of political dynamics in Washington so that Turkey perceives that it is situational and positional because of the possible shifting policies of the Biden administration.

Now the question to be asked is whether there are appropriate conditions for a permanent normalization between Ankara and Abu Dhabi and whether the demands of the parties have been met.

Ankara believes that the UAE’s policies toward Turkey have not been friendly at all in recent years despite Turkey’s warnings and positive initiatives many times.

In fact, the UAE needs to take many steps to convince Turkey and prove that these messages are not positional due to Biden’s arrival.

Although Ankara expressed that the decision to lift the blockade against Qatar is very positive, it is difficult to expect Turkey to believe in this sudden peace-dove attitude of the UAE. Even so, Ankara hailed a breakthrough between Gulf Arab states and Qatar last week and President Recep Tayyip Erdoğan said that the move to restore ties and lift restrictions was "very beneficial" for the region.

On the other hand, in order for Turkey to be able to trust the UAE again, unresolved problems that still stand in the middle must be answered, issues that dragged bilateral relations to a standstill. As the latest ring of tension between the two countries, Ankara clearly believes that the agreement, which was promoted as the "deal of the century" and signed by the UAE, Bahrein, Israel and the U.S. last year, is a major blow for the Palestinian cause overall.

Moreover, Ankara has not forgotten Abu Dhabi's attacks on Turkey in areas such as Libya and Syria through terrorist organizations. In Libya, Abu Dhabi backed putschist Gen. Khalifa Haftar and sought to oust the legitimate U.N.-recognized Government of National Accord (GNA). In Syria, it supported the Bashar Assad regime in its offensive against democracy and civil rights. Turkish officials have warned the UAE many times since it offered financial and logistical support to the PKK terrorist group, which still carries out attacks on Turkey.

Evidently, last year in June, a security official from the Kurdistan Regional Government (KRG), who spoke to London-based The New Arab newspaper, stated that the UAE supported the PKK terrorist group in northern Iraq by means of financial aid over the past few months. The UAE also became a lifeline for another terrorist group against Turkey. Emails from UAE Ambassador Yousef Al Otaiba to the U.S. revealed that the UAE financed the Gülenist Terror Group (FETÖ) in their 2016 coup attempt against Turkey. David Hearst of the Middle East Eye wrote that Dahlan as the owner of Al Ghad TV, who has special financial and political ties with the UAE, transferred money to FETÖ for the attempted coup.

The arrest of two UAE spies, Samir Semih Shaban and Zaki Y.M. Hasan, by the Turkish National Intelligence Organization (MIT) in April 2019 also revealed that Abu Dhabi has a spy network operating throughout the region and in Turkey. There are also significant findings that indicate this agent network is linked to the killing of Saudi journalist Jamal Khashoggi. The UAE’s dark media network and financial connections also target other news outlets. According to a research by Reuters in 2019, a group of American hackers who once worked for U.S. intelligence agencies helped the UAE spy on a BBC host, the chairperson of Al-Jazeera and other prominent Arab media figures in 2017.

In light of these events, the UAE's cooperation with dictators and putschists, such as President Abdel-Fattah el-Sissi in Egypt, Bashar Assad in Syria, and putschist Gen. Khalifa Haftar in Libya, as well as supporting terrorist groups such as the PKK in northern Iraq and FETÖ against Turkey, were the strategies the UAE used to maximize its interests in the region and labeling Turkey and Qatar as the evil of axis.

Now Ankara's initial reaction to messages from the UAE from Turkey is "positive" but clearly not "convincing." According to Ragip Soylu's recent report on Middle East Eye, an unnamed senior Turkish official also reiterated and confirmed all of the illegal activities of the UAE to sabotage Turkey in the region in the past few years. “As we always said, it was the UAE that has tried to sabotage our government in the region. We have never made similar efforts against them," he said. Therefore, it is important whether the statements of UAE Foreign Affairs Minister Anwar Mohammed Gargash will meet Ankara's expectations in terms of "respect for mutual sovereignty." For this reason, before warning Turkey over its relations with the Muslim Brotherhood, the UAE has to deal with its own baggage that is full of dirty stuff.