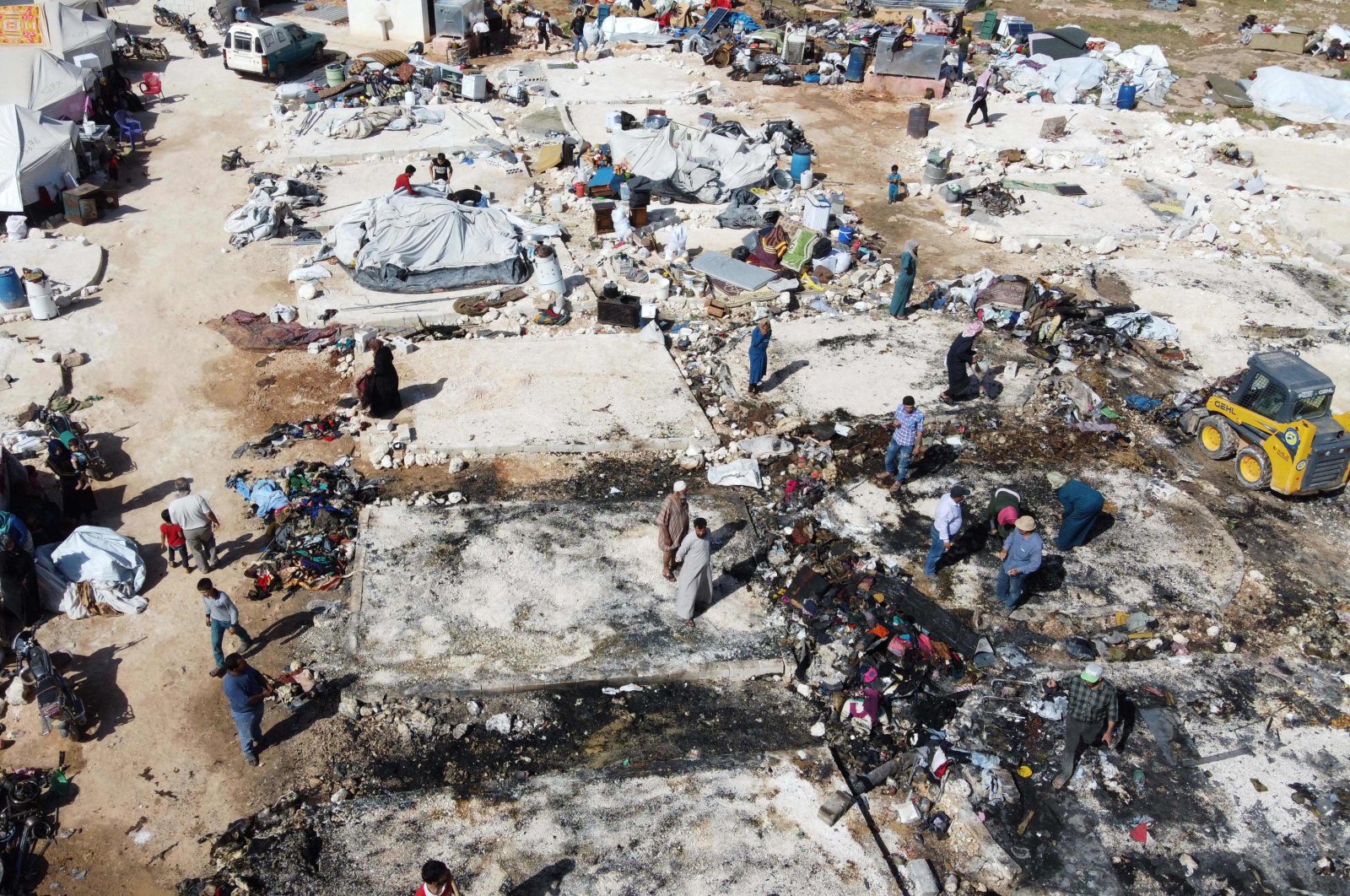 An aerial view shows charred tents after a fire that was reportedly caused by a cooking accident destroyed dozens of temporary shelters housing displaced Syrians, in the Deir Hassan camp for the displaced, in Idlib's northern countryside near the Turkish border, May 17, 2020. (AFP Photo)
by DAILY SABAH WITH AA May 17, 2020 1:20 pm
Edited By Dilara Aslan
RECOMMENDED

At least two civilians have been killed in seven fires that have broken out in the last three weeks in the refugee camps along the Turkey-Syria border zone, according to a local official.

Mohammad Hallaj, the director of Syria's Response Coordination Group, told Anadolu Agency (AA) on Sunday that gas cylinders had caused the fires, while the close proximity of tents to one another led to their rapid spread. The camps are populated by those having fled attacks from the Bashar Assad regime.

In the village of Deir Hassan, some 20 tents caught fire in total on Saturday evening, Hallaj said.

"The fire was extinguished by refugees' efforts and with the support of civil defense groups (White Helmets) in the region," he said, adding that nobody had been affected by the flames.

Almost a million people fled the Assad regime’s offensive on Idlib – the last opposition bastion – since December with many seeking refuge in overcrowded tent camps near the Turkish border. Fires are a common and real threat due to their potential to spread. While some of the displaced have returned to Idlib for fears of the global pandemic after a cease-fire brokered by Turkey and Russia, many still refuse to go back and face a potential renewed offensive by the regime.

As the fight against the coronavirus continues all around the world, vulnerable groups, particularly refugees, face greater risk due to the dire conditions at camps, making them potential hot spots for a pandemic. Displaced Syrians top the list of these vulnerable groups due to their large number and the country's collapsed infrastructure and health care system.

Syria's damaged health infrastructure and massive displacement of citizens as a result of attacks by the Assad regime and Russia make potential containment measures a nearly impossible task.

The United Nations, several humanitarian groups and Turkey have been trying to address the needs of the people, yet efforts remain insufficient and lack wider international attention.

Meanwhile, the Istanbul-based İyilik (Goodness) Association sent seven trucks of aid to needy families in Idlib. The head of the association, Mehmet Kayış, told AA on Sunday that seven trucks of 200 food packages were sent within the scope of the Ramadan aid campaign. Kayış also indicated that the association was distributing bread produced by bakeries in Idlib to families every day.

Kayış said that with the dedicated work of the association’ representations in Turkey together with the Vefa Social Support Group, food packages had been sent to aid 11,000 families.