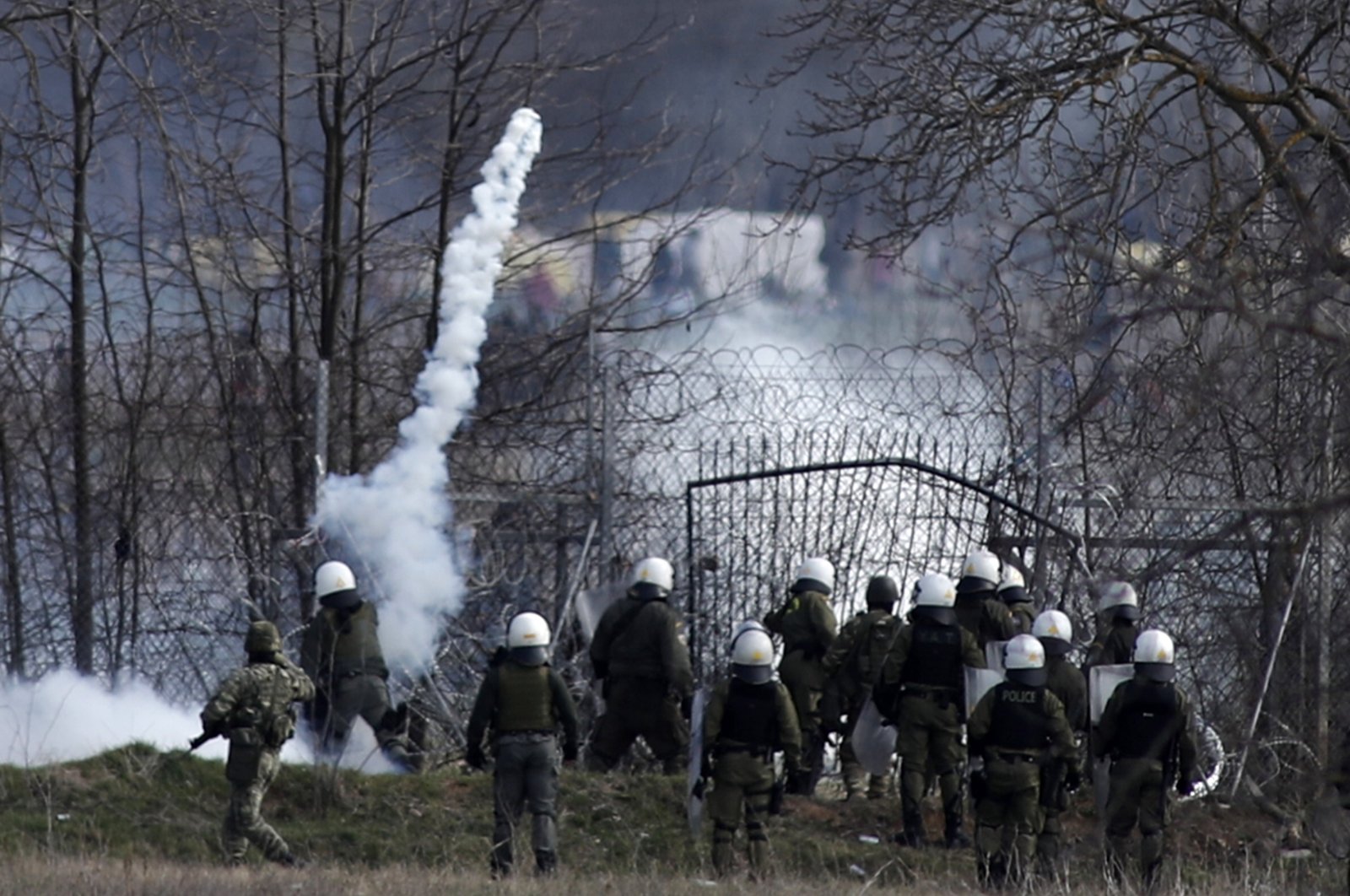 Greek police stand guard as migrants gather at a border fence on the Turkish side during clashes at the Greek-Turkish border in the town of Kastanies, the Evros region, March 7, 2020. (AP Photo)
by DAILY SABAH Mar 09, 2020 11:17 am
Edited By Dilara Aslan
RECOMMENDED

President Recep Tayyip Erdoğan will meet with NATO Secretary-General Jens Stoltenberg, European Commission President Ursula von der Leyen and other officials on Monday during his visit to Brussels to discuss the recent refugee crisis following the escalation of conflict in Syria.

Tens of thousands of asylum-seekers have been trying to cross the land border between Turkey and Greece for a week after Ankara announced it would no longer prevent people from trying to cross into the European Union.

Erdoğan and EU officials will "discuss EU-Turkey matters, including migration, security, stability in the region and the crisis in Syria," European Council President Charles Michel’s spokesman said on Twitter.

The meeting comes at a critical time. Relations between Ankara and Brussels remain strained after Turkey’s decision to allow refugees and migrants without proper paperwork to cross through its borders to Europe.

"Finding a solution to this situation will require relieving the pressure that is put on the border," von der Leyen told a news conference Monday.

She said ensuring the right to asylum, support for both Turkey and Greece, and moving migrants – especially minors – stranded on the Greek islands to mainland Europe were immediately needed, as well.

It has been 11 days since migrants flocked to the Turkish border in northwestern Edirne province to wait for the EU to open its gates for passage. More than 3,000 refugees continue to wait hopefully despite staying out in the open in cold weather.

The provincial migration office of the Governorate of Edirne is meanwhile distributing three meals a day to refugees, while medical staff tries to treat those who have been affected by tear gas thrown by the Greek side.

As a response to the lack of humanitarian and financial aid for refugees from the international community, Erdoğan warned European countries that Turkey could not handle a new migration wave and would have to open its borders in the case of another influx, allowing hundreds of thousands of migrants to head toward Europe.

Around 116,000 refugees and migrants are currently living in Greece, according to figures from the U.N. Refugee Agency (UNHCR).

Among them are an estimated 5,500 unaccompanied minors, according to Greece's National Center for Social Solidarity (EKKA). Many of them are living in extremely cramped and unsanitary conditions.