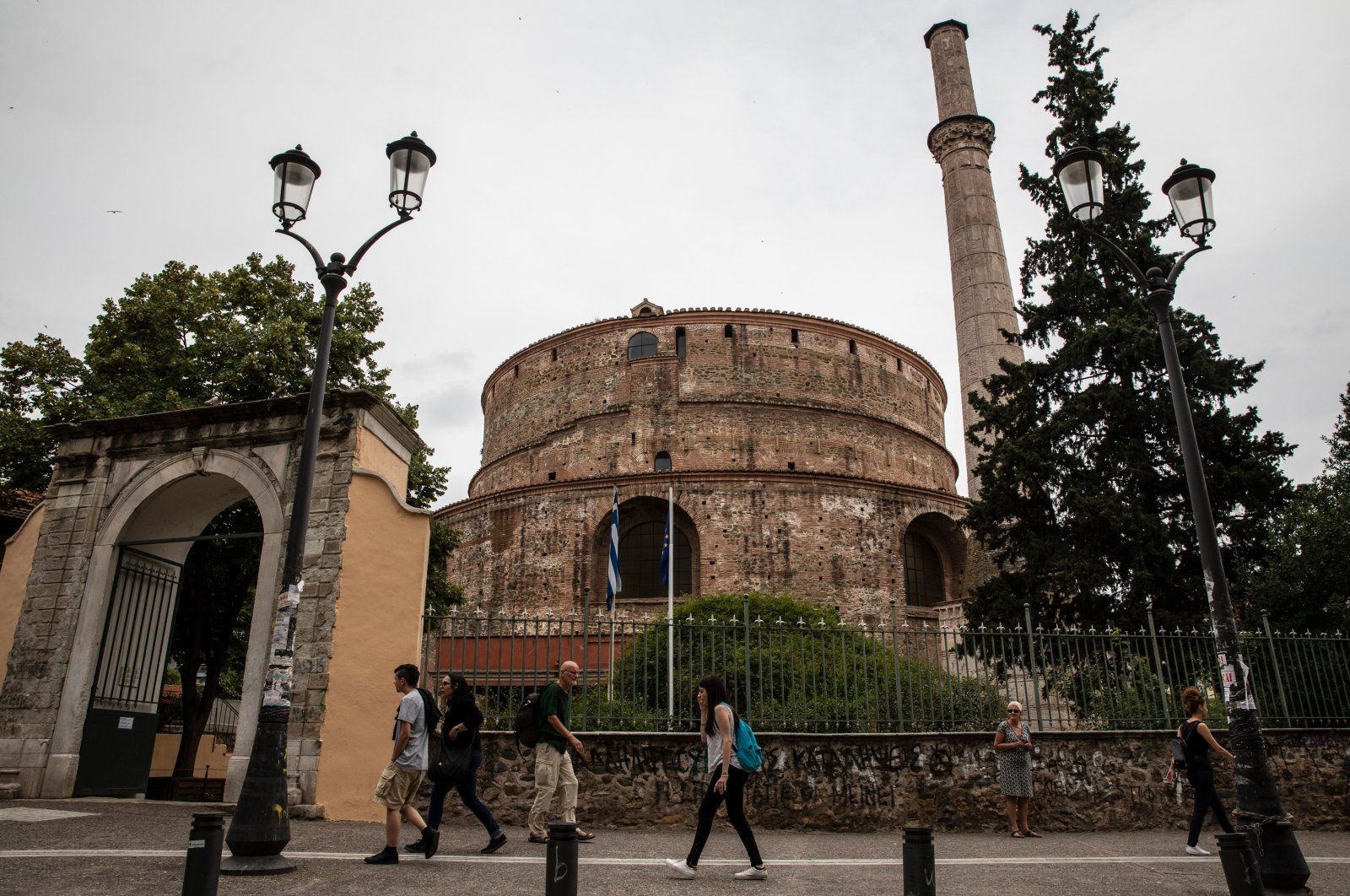 A view of the Sultan Hortac Mosque in Greece's Thessaloniki, which is not open to worship despite its good condition. (DHA)
by DAILY SABAH WITH AA Jul 15, 2020 11:51 am
RECOMMENDED

Even though Greece has criticized Turkey for reopening Istanbul's historic Hagia Sophia as a mosque, the situation of Ottoman-era monuments in Greece tells a different story, with most of them neglected, ruined or used for other purposes, which completely disregards their history.

Some mosques were converted into churches through renovations, while others were used as bars or movie theaters for "adult" films.

It is estimated that there are over 10,000 artifacts and monuments from Turkish-Islamic architecture in Greece.

While intense criticism was made by Greece over the opening of the Hagia Sophia for worship, the situation of Turkish-Islamic structures in the country merits attention.

On Friday, Turkey’s Council of State annulled a 1934 Cabinet decree that had turned Hagia Sophia into a museum, paving the way for its use again as a mosque after an 85-year hiatus. Before that, it had been a mosque for nearly 500 years.

Built in 1468 in Thessaloniki, Hamza Bey Mosque was used as a place of worship for a while after Greece gained its independence. In the following years, the minaret of the mosque, made of cut stone, was destroyed, the pencil works on the dome and the writing plates were removed, and the interlocking wooden pulpit inside was destroyed.

The mosque, owned by the National Bank of Greece in 1927, was later sold privately, divided into a shop and a cinema and used for showing adult movies until the 1980s.

The Faik Pasha Mosque in the city of Narda (Arta) in the Ioannina region was turned into a church after the population exchange between Turkey and Greece in 1923. It is known that the mosque, which was later abandoned, was used as a bar-pavilion in the 1970s. The mosque, which seems to have been built as the center of a complex in the 15th century, is now in ruins.

On the other hand, mosques and historical buildings in many important cities, including the capital Athens, Ioannina, Giannitsa, Crete, Larisa and Kavala, continue to share the same fate.

In Athens, where there is no official mosque open for worship, the oldest mosque, Fethiye Mosque, was used for many different purposes such as a military prison and warehouse after the end of the Ottoman administration in the city.

The mosque, located in the Roman Agora on the outskirts of the city’s Acropolis within the archaeological area, is believed to have been built during the reign of Ottoman Sultan Mehmet II and was used as a storehouse for historical artifacts until 2010. Fethiye Mosque is now used as an exhibition hall since the restoration works ended in 2017.

The Cizderiye Mosque, located a few hundred meters from the Fethiye Mosque, is in Monastiraki Square, one of the touristic places of the city. The mosque is kept closed for most of the year, serving as a ceramics museum for visitors from time to time.

There are no traces of buildings such as the Yeni (New) Mosque, Domed Mosque, İç Kale Mosque, Hüseyin Efendi Dervish Lodge and Hacı Ali Bath, which are among the Turkish-Islamic works in Athens and registered in the Ottoman archives as well as yearbooks.

A similar situation has also occurred in Spain, a country with a rich Islamic heritage due to the rule of Muslims between 8th and 11th centuries, known as Al-Andalus.

Especially the Mosque of Cordoba, also known as The Mosque-Cathedral of Cordoba, which is one of the most important Islamic heritages in the world, is currently being used as a monument while the cathedral part has the right to hold church services on certain days.

The mosque was built between the years of 786-933 by the Umayyad Caliphate. Once the biggest mosque in the world, the building was converted into a church and then a cathedral in the 13th century when Christians once again established their rule over the region. Over time, the mosque suffered significant damage with a major part of its minaret broken down and turned into a bell tower. Listed as a World Heritage Site by UNESCO in 1984, the structure was rebranded as the Mosque-Cathedral of Cordoba and started to be used as a touristic spot with monumental status, while the cathedral part is still being used for church services from time to time.

Although the Muslim community in Spain has expressed demands to reopen the Mosque-Cathedral of Cordoba for Muslim worship as well, these demands remained unanswered.

Another Islamic heritage site in Spain that was taken away from the Muslims for worship was a mosque in Alhambra Palace in Granada, one of the most visited historic sites in the country. Built in 1308, the mosque was converted into a church in 1492 and is still open to worship for Catholic Christians to this day.

Masjid al-Murabitin, one of the oldest mosques in the country located in Granada, was also damaged heavily in the 16th century and eventually reconstructed as a church named Alminar de San Jose. The minaret of the mosque was also turned into a bell tower during its reconstruction.

Catedral de Sevilla, aka the Cathedral of Saint Mary of the See, located in the Seville province, which is known as the biggest cathedral in the world, also hosts the ruins of Almohad Mosque, which was built in 1182 but destroyed in 1433 when the region was recaptured by the Christians.

Bab Mardum Mosque, also known as the Mosque of Cristo de la Luz, which was built in Toledo in 999, was also converted into a church in 1085 and currently is being used as a touristic monument.