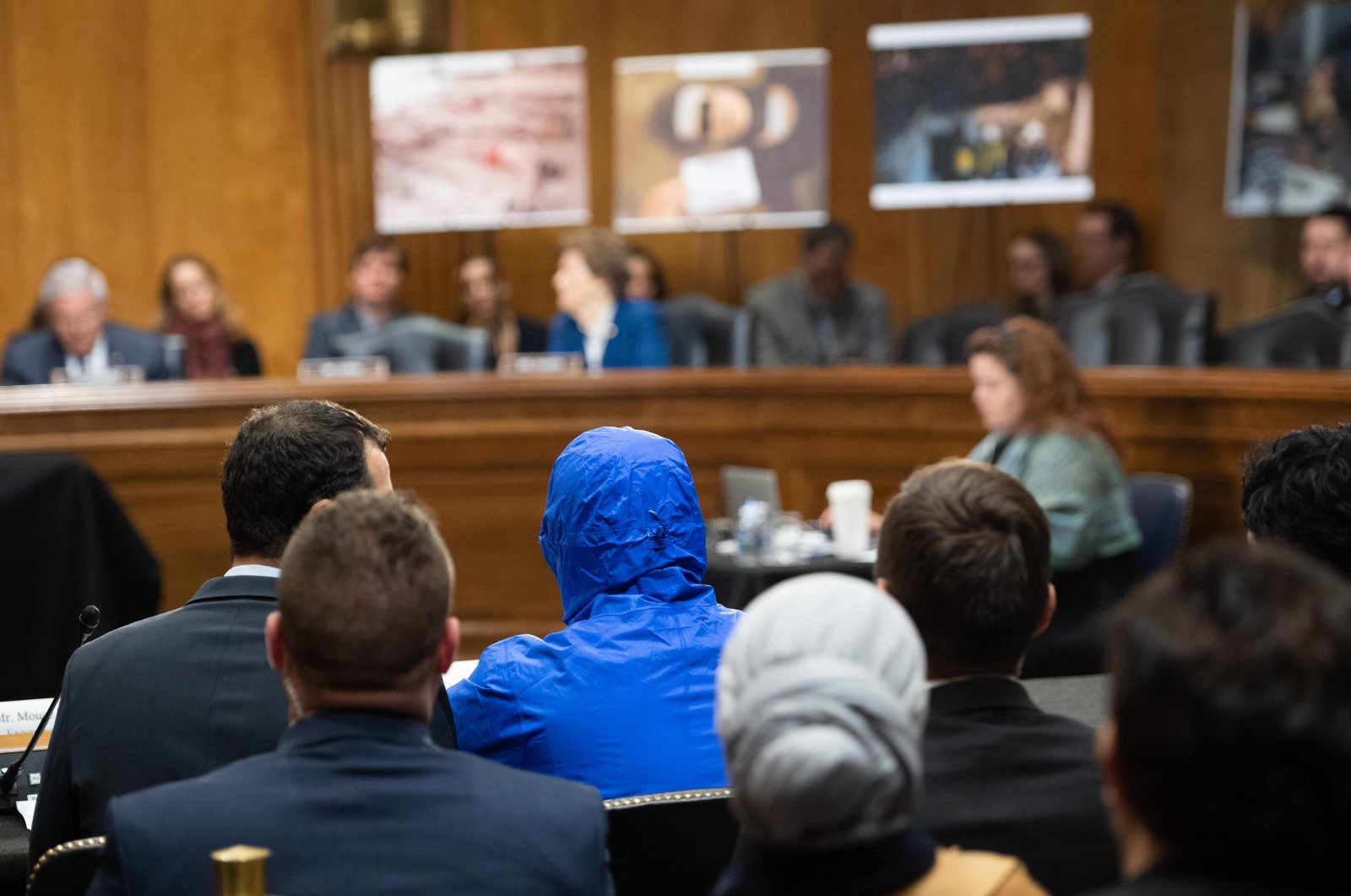 A Syrian military defector using the pseudonym Caesar, while also wearing a hood to protect his identity, testifies about the war in Syria during a Senate Foreign Relations committee hearing on Capitol Hill in Washington, DC, March 11. (AFP Photo)
by Compiled from Wire Services Mar 11, 2020 7:58 pm
RECOMMENDED

A Syrian defector whose thousands of gruesome photos documented abuse under the Bashar Assad regime appealed Wednesday for action to ensure accountability as he appeared incognito before the U.S. Congress.

The former Syrian military photographer, who goes by the pseudonym Caesar, fled in 2014 with 55,000 images of brutality in Assad's jails as the regime crushed an uprising.

In an unusual scene in the bustling U.S. Congress, Caesar testified before the Senate Foreign Relations disguised under an oversized blue hoodie with the audience and media ordered to turn off all cameras and phones to ensure his safety.

Caesar said despite the personal risks he has taken, he had not achieved his goal of ending the abuse.

"Killing has increased in the same places and in the same ways and at the hands of the very same criminals," he said.

"And the reason simply is that the Assad regime considered the inaction of the international community and the mere statements of condemnation as a green light for him to continue his crimes against the Syrian people."

A previous appearance before the U.S. Congress by Caesar in 2014 led lawmakers to draft a law named after him that would impose financial restrictions on Syria, including blocking reconstruction aid, until perpetrators of atrocities are brought to justice.

The act, which also penalizes Russian and other companies that work with Assad, was finally signed into law in December by President Donald Trump after years of fighting inside Congress.

Caesar hailed the act but called for lawmakers to ensure it was enforced.

"The Caesar Law has become the only ray of hope for the Syrian people in the absence of any military or political solution," he said.

"This law is a powerful message to all who support the Assad regime that the time for accountability and justice is coming and that no matter how long oppression lasts."

Representatives from the Syrian Emergency Task Force and the Syria Civil Defence (or White Helmets) also testified in the Senate.

Senator Jim Risch, the committee's Republican chairman, said he was working with the Trump administration to ensure sanctions were implemented. "The Syrian people deserve better," he said.

The testimony comes amid a fresh humanitarian crisis in Syria as Assad, backed by Russia and Iran, pushes to retake the Idlib region from Syrian opposition forces.