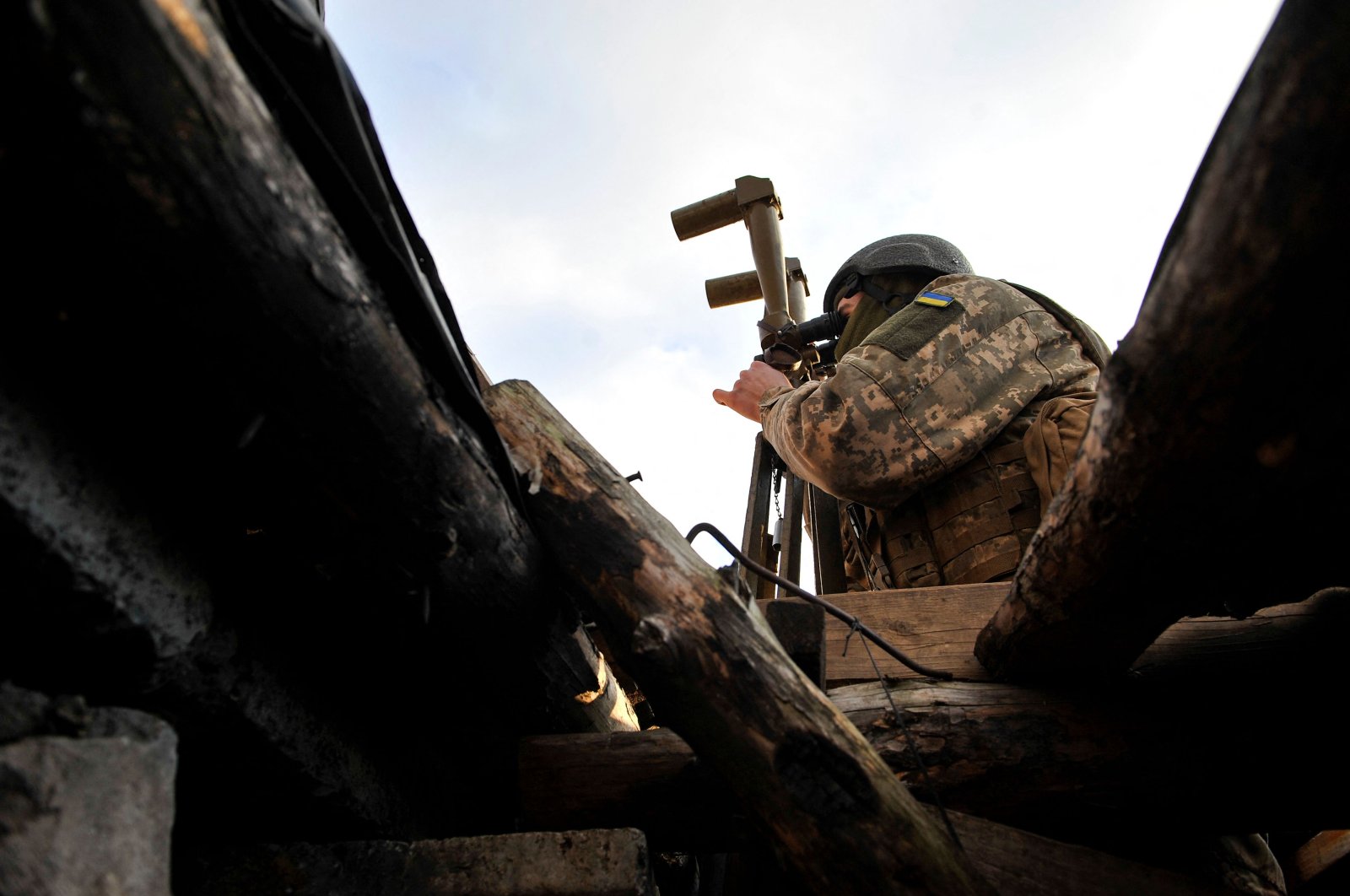 A Ukrainian soldier looks through a spyglass at a position on the front line with Russia-backed separatists near the village of Talakivka, the Donetsk region, Ukraine, Nov. 24, 2021. (AFP Photo)
by Meryem Ilayda Atlas Nov 29, 2021 12:53 pm
RECOMMENDED

Turkey could mediate between Ukraine and Russia amid increasing tensions in the region, President Recep Tayyip Erdoğan said.

“It is our desire that the attitude in this matter develops in a positive direction. There could be a mediation about this, we will discuss this issue with them, we would like to have a share in the solution of this by developing these talks both with Ukraine and with Mr. Putin,” he added on his return from Turkmenistan.

Ukraine's military intelligence said last week that Russia had amassed more than 92,000 troops around Ukraine's borders and was preparing for an attack by the end of January or the beginning of February.

Ukraine, which wants to join the NATO military alliance, has blamed Moscow for supporting separatists in a conflict in its east since 2014.

On the other hand, Erdoğan also touched on the situation of Syrians, reiterating that Turkey hosts around 5 million refugees.

“We show them the utmost attention possible because hosting has a different place in the values of (Turks). We continue this. We are currently building single-story briquette houses in Syria’s north. This ignited motivation, and now some countries are asking that we present this project, saying that two- or three-story houses could be made,” the president elaborated.

Erdoğan also added that Turkey is working on establishing the necessary conditions for the return of Syrians to their homes. “Our Interior Ministry is following the issue closely.”

Ankara has so far spent around $40 billion (TL 274 billion) on the Syrians in Turkey, while the European Union has provided only around 3 billion euros ($3.34 billion) of a promised 6 billion euros – a gap Turkey has long demanded be closed.

Meanwhile, Turkey’s counterterrorism operations across the border in northern Syria since 2016 have also allowed hundreds of thousands of Syrians in Turkey to resettle in their homeland.

Turkey has been building briquette houses in Idlib province that provide warm shelter for displaced Syrians.

Launched on Jan. 13, 2020, in coordination with Turkey's Disaster and Emergency Management Authority (AFAD), the "We are together, We are siding with Idlib" aid campaign received major support from other Turkish aid organizations, including from the Turkish Red Crescent (Kızılay), the Humanitarian Relief Foundation (IHH), the Sadakataşı Association, the Türkiye Diyanet Foundation (TDV) and many more.