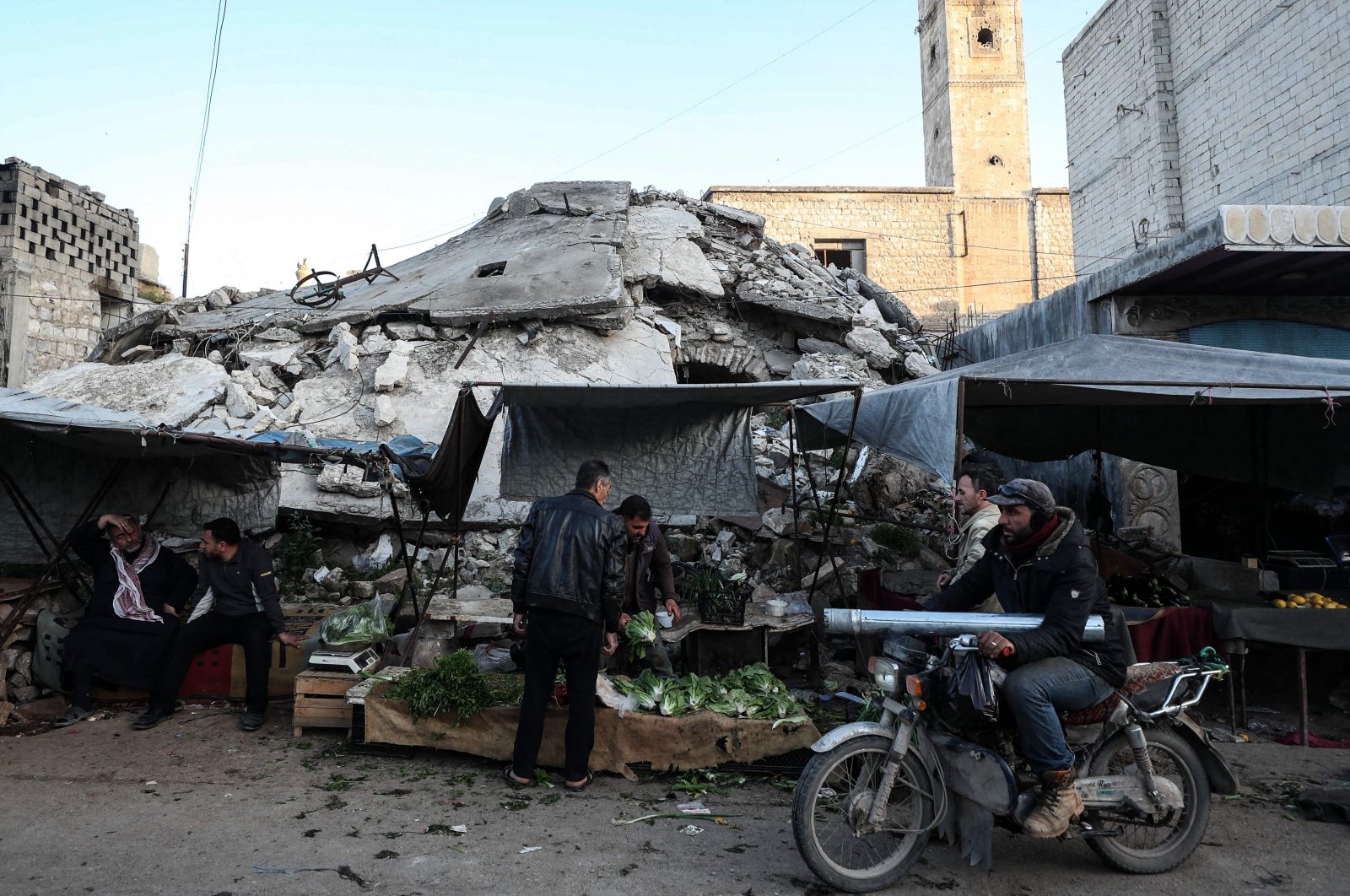 Syrians buy food products at a market ahead of iftar, the evening meal that ends the daily fast at sunset, on the second day of Ramadan, in the war-ravaged city of Ariha, located near the strategic M4 highway, in the southern countryside of the Idlib province, Syria, April 15, 2021. (AFP Photo)
by DAILY SABAH Apr 27, 2021 11:23 am

Since the cease-fire deal between Turkey and Russia significantly reduced the number of attacks on the last opposition bastion, displaced Syrians have started to return to their homes

Some 561,746 civilians returned to their homes despite violations of the cease-fire that was struck between Turkey and Russia in March 2020 in Syria’s northwestern Idlib province, Mohammad Hallaj, the director of Syria's Response Coordination Group, stated Tuesday.

He highlighted that most of the returnees are in need of aid coming from nongovernmental organizations (NGOs) and warned civilians to be careful of bomb remnants in the places they returned to. Hallaj stated that more civilians could return if the cease-fire holds.

At least 75 attacks by the Bashar Assad regime and its allies have been recorded since the cease-fire, a human rights group told Daily Sabah last month.

“The cease-fire agreement in Idlib in March 2020 was accompanied by the outbreak of the COVID-19 pandemic, which we believe has had a major impact on the capabilities of the Syrian regime army and the Iranian militias affiliated with it. Thus, this contributed to a decline in bombardment operations against civilians, leading to a decline in civilian casualties,” the Syrian Network for Human Rights (SNHR) stated.

Syrians displaced in several regions, either by terrorist organizations or the assaults of the Assad regime, have sought refuge in Turkey. Nearly 1 million had fled from Syria's northwestern Idlib province when the regime in December 2019 intensified its attacks to regain the last opposition bastion. Upon the Assad regime's attack, Turkey launched Operation Spring Shield. After the surge of violence decreased following a Turkey-Russia brokered cease-fire in the region, many people started to return to the province.

After launching three consecutive operations in northern Syria, Turkey rolled up its sleeves to reconstruct hospitals, schools, mosques and roads destroyed by the PKK's Syrian wing, the YPG. Within the scope of ameliorating the region's social infrastructure, people were given food and clothing by several NGOs, while roads and buildings were rebuilt.

Turkey still hosts more Syrian refugees in the world than any other country, according to figures. Turkey has made large investments toward social cohesion policies to enable Syrians to integrate into Turkish society smoothly.

In addition to 33,000 university students and more than half a million Syrian children are enrolled in schools across Turkey, according to UNICEF. Students are learning the Turkish language, as well as other disciplines.

Meanwhile, Turkey’s counterterrorism operations across the border in northern Syria since 2016 have also allowed hundreds of thousands of Syrians in Turkey to resettle in their homeland.

Though the migrant deal struck between Turkey and the EU in 2016 outlined a joint cooperation effort in northern Syria in order to better conditions for the people, Ankara has not received substantial support from Brussels in this regard.

“The EU and its member states will work with Turkey in any joint endeavor to improve humanitarian conditions inside Syria, in particular in certain areas near the Turkish border which would allow for the local population and refugees to live in areas that will be safer,” read the March 18 statement.

Turkey, on the other hand, has been building briquette houses in Idlib province that provide warm shelter for displaced Syrians.

Launched on Jan. 13, 2020, in coordination with Turkey's Disaster and Emergency Management Authority (AFAD), the "We are together, We are siding with Idlib" aid campaign received major support from other Turkish aid organizations, including from the Turkish Red Crescent (Kızılay), the Humanitarian Relief Foundation (IHH), the Sadakataşı Association, the Türkiye Diyanet Foundation (TDV) and many more.

Idlib, in need of further support

Struggling under difficult hygiene conditions in makeshift tent camps, the U.N. and other health officials also warned that the displaced people are at great risk in the face of the COVID-19 pandemic.

Most recently, the first batch of COVID-19 vaccines arrived Wednesday in the Idlib region through Turkey.

For years, the Bashar Assad regime has ignored the needs and safety of the Syrian people, only eyeing further gains of territory and crushing the opposition. With this aim, the regime has for years bombed vital facilities including schools, hospitals and residential areas, causing the displacement of almost half of the country’s population while adopting policies to make their lives more difficult.

Idlib falls within a de-escalation zone forged under the agreement between Turkey and Russia.