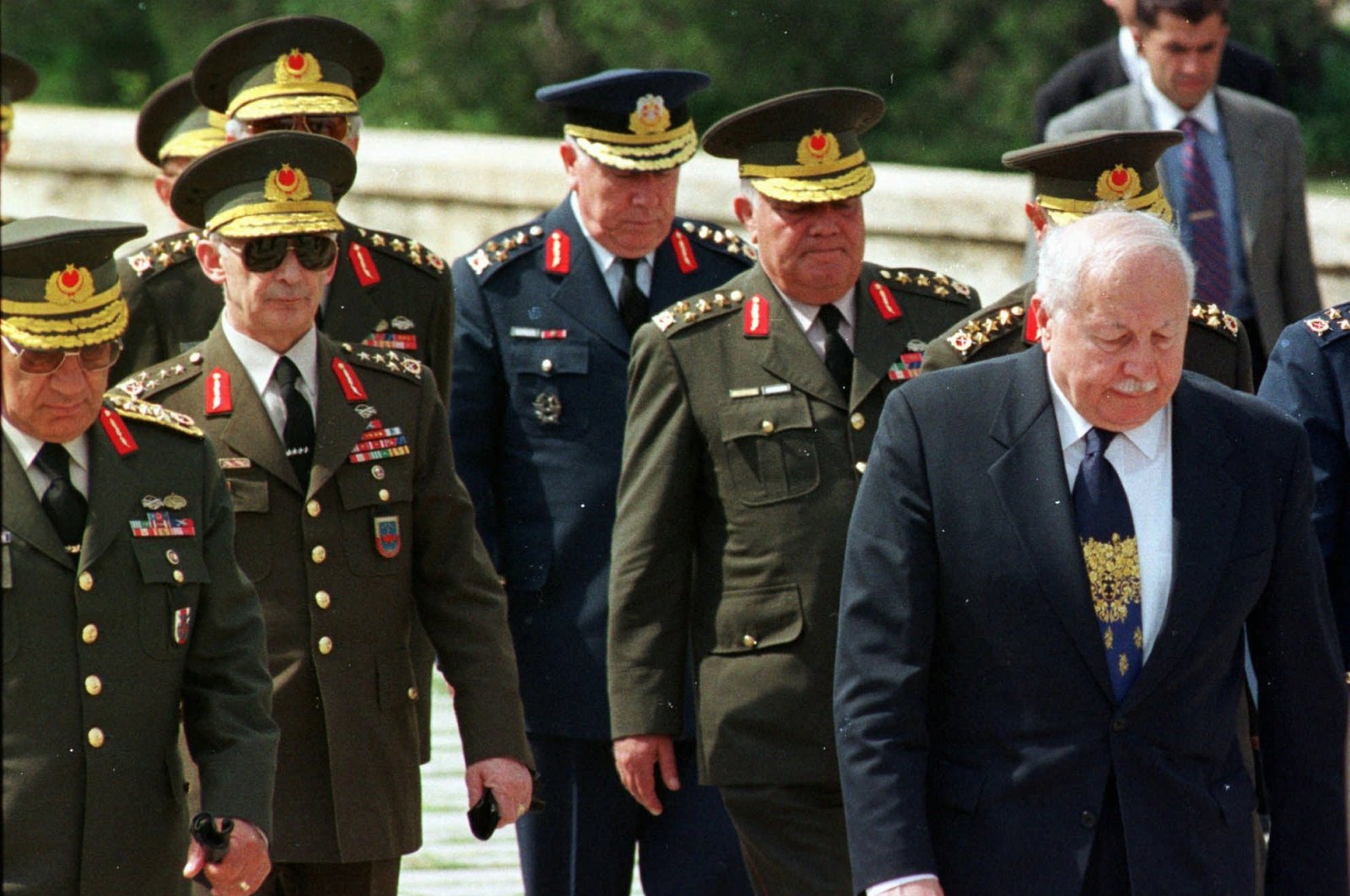 A scar on the psyche of the Turkish nation, the Feb. 28 “post-modern coup” was predicted by its perpetrators to last “1,000 years.” While it did not last that long, its consequences haunt the country

“I was the mayor of Istanbul during the Feb. 28 era. I was thrown into jail for reading a poem, and my political career was targeted. I am now serving as the first democratically elected president of Turkey. I am serving my nation with pride, despite every move to hinder. A coup is a crime against humanity. I lived through the Feb. 28 coup. I am aware of Feb. 28.”

Those were the words uttered by President Recep Tayyip Erdoğan early Sunday on the 24th anniversary of the “post-modern coup,” which caused such deep damage to Turkey's democracy that its legacy is still embedded in the minds of the Turkish people.

The Turkish military, which considered even the slightest disruption a "legitimate" attempt to harm the country's security and secular state structure, dealt one of the heaviest blows Turkish democracy has ever experienced on that day.

The Turkish government at the time was run by a coalition led by then-Prime Minister Necmettin Erbakan’s Welfare Party (RP), but the military was apprehensive about the premier due to his party’s conservative leanings, alleging that the RP's supposed "Islamist" agenda was problematic.

Erbakan’s visit to Libya, his promotion of unity between members of the Developing-8 (D-8) bloc of nations and his decision to host religious figures for a Ramadan iftar dinner were among the reasons that motivated the military to increase pressure on the leader, accusing the prime minister of engaging in “reactionary activities.”

The military expressed its dissatisfaction on Feb. 4 by holding a “military parade,” which included tanks, in the streets of Ankara’s Sincan district.

Sincan Mayor and RP member Bekir Yıldız was dismissed from his post and arrested – along with nine others – after being accused by military authorities of “inciting” the public.

The meeting produced what would come to be known as the “February 28 Memorandum,” which contained a list of resolutions by the Turkish military taken in response to what it deemed “rising Islamist ideology.”

The memorandum’s main premises were to shut down the Islamic education-based imam hatip schools and prevent religious activities under the pretext of separating religion from the state.

However, the biggest outcome of the legislature was probably the banning of women wearing headscarves from entering any public buildings, including schools and universities. This ban caused millions of young women to either give up their education or suffer while trying to receive a proper one. Female teachers were also dismissed from their jobs if they refused to remove their headscarves and the abhorred practice of "persuasion rooms" was launched in universities, where headscarf-wearing students would be "persuaded" to remove their headscarves amid threats of expulsion from the school. Women wearing headscarves were also not permitted to work.

The military then forced Erbakan to sign a slew of decrees, including the ban on headscarves, the shutting down of schools that provided Quranic education and the implementation of measures aimed at giving the military control over the independent media.

On June 18, 1997 the military went even further, forcing Erbakan’s entire government to resign, leaving the premiership in Deputy Prime Minister Tansu Çiller’s hands. Çiller was a leading member of Turkey’s True Path Party (DYP), which was a component of the governing coalition that also included Erbakan’s RP.

Then-President Süleyman Demirel, who was barred from having any political affiliation according to the laws back then, later asked Mesut Yılmaz, leader of the right-wing liberal Motherland Party (ANAP), to make up a new government.

In what has since been termed Turkey’s "post-modern" coup, a new government was unveiled, which took the reins of power from Erbakan. The new government included ANAP, the Democratic Left Party (DSP) and the Democrat Turkey Party (DTP).

DSP leader Bülent Ecevit became the deputy prime minister in the new administration, which was then used to enforce the MGK’s orders.

Private schools and foundations with alleged links to religious or conservative groups were shut, while devout Muslims were largely marginalized from public institutions – including government agencies, state universities, the civil service, the judiciary and the military.

One of the masterminds of the Feb. 28 coup, Turkish Military’s then-Land Forces Commander Hüseyin Kıvrıkoğlu, who would later become head of Turkish Chief of Staff, once said that “Feb. 28 will last 1,000 years,” but he was utterly wrong in his wishful thinking.

Only five years later, the Justice and Development Party (AK Party) chaired by Erdoğan was chosen by the Turkish public in democratic elections, and the party has never lost an election since 2002. The Erdoğan-led party has since implemented many reforms to prevent the military from intervening in Turkish democracy and politics.

After the military influence over the Turkish judiciary and politics was gradually eliminated, the perpetrators of the Feb. 28 post-modern coup were brought to justice.

In a landmark decision in 2018, a Turkish court sentenced 21 high-level officials to life in prison for their roles in the 1997 coup.

Sixty-eight other suspects in the case were acquitted.

The court blamed Karadayı and Bir for "masterminding" the coup.

Many others who played roles in the coup have avoided arrest – due to old age or health problems – but have nevertheless been barred from leaving the country.

'They told me troops are rising up'

“Mr. Erbakan and I began receiving messages like ‘troops are rising up ’ from then-President Süleyman Demirel. These threats were so overwhelming and serious that my family was being targeted. I told them to do whatever they would do and that I had my rope in my pocket,” former Prime Minister Çiller said in an interview with Anadolu Agency (AA) on Sunday, underlining that she was undeterred by the coup plotters, referring to capital punishment, which was still in force back then and was carried out by hanging.

Çiller described the media outlets of the era as a “cartel” and said that the business circles, disturbed by Turkey’s ascension into the customs union, united against her.

“RP wasn’t wanted in the government; a strategy was laid out to prevent its presence in a governing coalition. All of the pressure inflicted on us was aimed at making us form a coalition with ANAP. I had already observed how coups divided the center-right of the political spectrum, so I wanted to unite the right. Even though we had more deputies, we granted the premiership to the ANAP and formed a minority government,” she said, further adding that it was impossible to merge the two parties' voter bases.

“It was clear that it was very hard to unite the two right-wing parties. As it proved unfeasible, we formed a coalition with RP,” she said, detailing the process that would later lead to the forcible sacking of Erbakan.

Saying that they received threats of a military uprising, she added that the allegations that the RP supports anti-secular actions were floated.

Çiller also said that the then-ambassador of Iran to Ankara, who made an anti-secular speech during an event organized by the RP to protest Israel’s illegal occupation of Jerusalem and Palestinian territories, was expelled by the Turkish government, but anti-RP spheres continued their claims against RP.

The former prime minister also said that Erbakan wanted to reconcile with the military in order to continue his government’s service to the nation.

“The Turkish military is the apple of my eye,” she said, adding that rejecting the military intervention into democracy is crucial nevertheless.

Çiller also detailed her dialogue with Erbakan after the tanks paraded in Ankara’s Sincan, which was a clear warning to the government by the military.

“My advice to Erbakan was to sack the chief of staff and other high-ranking members of the military, but he said that the president would not approve this. I told him that this was a historic duty, but he said that a ruling to shut RP down would come later. We managed to grow the Turkish economy by 8%t, so the economy was on the right track, and we were working in harmony with RP,” she said, emphasizing that the otherwise functioning coalition was effectively terminated by the military’s intervention.

“The most conservative segment of society was producing democratic initiatives. The atmosphere would later lead to a prominent reconciliation between opposite sides of the nation, but that was averted by this coup,” she added.

Çiller said that Feb. 28 also sent Turkey down a path toward an economic crisis.

“The banks that went bankrupt after Feb. 28 led Turkey into a big crisis. The cost of this coup was $291 billion. With that amount of money, we could largely solve unemployment,” she said.